When Life was Beautiful

Sooni Taraporevala’s photographs are not just of the Parsi community, they are of a city and way of life that no longer exists 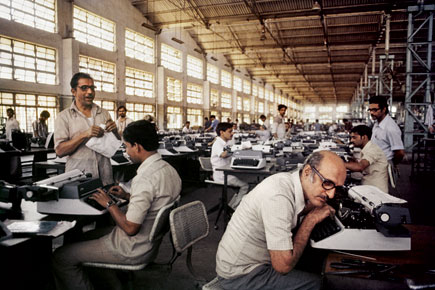 Sooni Taraporevala’s photographs are not just of the Parsi community, they are of a city and way of life that no longer exists


One walks past the 13 cats that wander in and out of the compound and climbs up to the third floor to enter the cement-floored Chemould Gallery. Close to the entrance are two contrasting images of a man behind the counter of an Irani restaurant. Spread over two decades apart, the photographs of the defiant, stoic Rashid Irani bear witness to the rapid cultural degradation of what was once Bombay. In the first photograph, taken in 1984, a young Rashid Irani, with jet black hair, mans a counter full of imported cigarettes, detergent packs, vintage posters and rows of neatly-stacked soft drinks in glass bottles. He is caught looking outward, almost as if towards the future. In the second photograph, taken 24 years later, a little closer than the first, Rashid’s hair is grey, the posters are falling apart, there are more papers than goods on the shelves, and a lonesome Pepsi bottle, 500 ml of plastic gracelessness; Rashid here is caught looking inward, away from the light.

Ninety-four such timeless images by Sooni Taraporevala of her community of Parsis are not just about them. They hold a wide-span mirror to the viewer—of the simplicity of a time gone by, of families, of school, of friends, of charming old Bombay streets, of aunts in floral dresses and of laughter that originates deep inside our stomachs. To be perfectly honest, the photographs at first had almost no impact on my trained-to-be-dismissive news-photographer eye. The first round of the gallery yielded a deadened sigh and I plonked myself down on a bench. The wall facing me had a photograph of a man bending over and listening to the sound of a typewriter. Slowly, almost like a mother coaxing a child to come back to lunch, the spectacled man beckoned me to take another look at the images. To listen to them speak in their quiet tones.

There is indeed no turning back once that happens. The man with the typewriter reminds me of my father, who has clung on dearly to his Hermes 3000 typewriter, the only thing he took from his father-in-law besides his daughter. It still works, and although it is just noise for us, for him, it is nothing short of music.

A few steps ahead, a boy in a classroom raises his hand like a rocket; one eye on the timer, he has the right answer and he can’t wait to deliver it. Just like Cyrus, our class genius in class 4. Facing this image is one of a boy making faces in a Mickey Mouse T-shirt (Mehernosh, our troublemaker in class 5).

The reality is that it is hard to take simple and honest images. The simpler the image, the more universal the appeal. It’s impossible not to see oneself in these images by Sooni. One look at the photograph of a man diving deep into his shirt pocket while buying fruits reminds one of that very recurring motif. Or the photograph of two siblings sitting on a swing in Udvada, the sister’s hand stroking her younger brother’s hair. Or a young priest playing a video game, reminiscent of all the times we’d steal a few moments of time to help paratroopers land or a frog cross an obstacle-filled street. Little did we know that we were stacking away memories that would one day be unearthed at closing time in a gallery 20 years away.

In this day and age, as every other self-titled documentary photographer embarks on personal projects laden with blurs and grain and unreal nonsense, Sooni’s images stand out more than ever. Her images are not just about her, her skill or her community; they are about us, a city, a bunch of people who have probably lost touch with what we once were. Only a daughter, a sister, a mother—most importantly, a woman—can achieve the level of intimacy Sooni shares with her subjects and successfully translates into her photographs. They remind us of the need to keep things simple, easy. If something isn’t working, fix it; discarding it is hardly a solution. As they say in grease monkey lingo, if you are out to buy a second-hand car, look for one that is owned by a Parsi. It will probably be better handled and maintained than a newer one.

If, like me, you too are a child born in the 1980s, and survived all that the grungy 1990s and the last decade threw at you, these images leave you longing more than ever for a time that may never return. But one thing is for sure, the next time Bambai’s heat gets to you, you might just end up craving a Duke’s Mangola. This hunt will be worth it, and each refreshing sip may just remind you of good old Naaz cafe and your time there.