We Are All Lesbians

In a provocatively titled talk, Madhavi Menon argues against the assumption that sexual identities are an unchanging essence 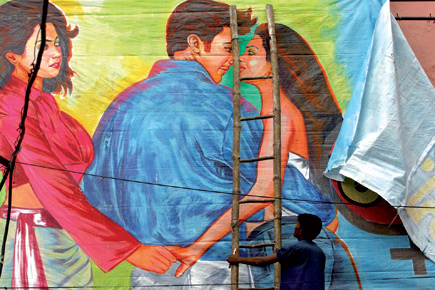 In a provocatively titled talk, Madhavi Menon argues against the assumption that sexual identities are an unchanging essence


A few weeks ago, I attended a talk titled ‘We Have Always Been Lesbians’ by Madhavi Menon at Delhi’s India Habitat Centre. The subject of this lecture was sexuality, as analysed in its temporal and cultural context. Though the conclusion Menon drew about the fluidity of desire was not new, her way of tackling the subject made it one of the most rivetting talks on gender and sexuality I have attended in the capital in the last several years.

During the talk, Menon explained the ways in which a society understands sexual identity in its cultural and temporal context by offering examples of different cultures, juxtaposing them to illustrate how a stable sexual identity took form within each of them over time.

She also argued that sexual identity as it presents itself in the literature of a certain time is often very different from the identities imposed by laws and societal attitudes of the time. To emphasise this point, she focused on the specific dastan of Chouboli and aspects of dastangoi performance in general, raising questions of how individuals acquire sexuality and if such a thing exists in a definite space.

In 2008, Lisa Diamond, associate professor of Psychology and Gender Studies at University of Utah, touched on a similar subject in her book Sexual Fluidity: Understanding Women’s Love and Desire. In it, Diamond writes about sexuality as a product of environment, time, culture and context, and tries to decipher the question: could we possibly be more fluid than we have supposed?

It seems likely that Menon has read this book. A professor of English at Ashoka University, she is known for her keen interest in queer theory. She has authored two books—Wanton Words: Rhetoric and Sexuality in English Renaissance Drama and Unhistorical Shakespeare: Queer Theory in Shakespearean Literature and Film—and edited a volume titled ShakesQueer: A Queer Companion to The Complete Works of Shakespeare, which places the works of William Shakespeare in a queer-theory context.

It is no surprise, then, that her talk amalgamated law, queer theory and literature to come up with the thesis that all of us essentially are and are not lesbians, arguing that sexual orientation—and chiefly the term ‘lesbian’—is a State-orchestrated term designed to control people.

During the talk, Menon said that the idea for the theme came about when she heard arguments for and against the demolition of Section 377 of the Indian Penal Code, which made homosexuality illegal, at the Delhi High Court in 2009.

“Both [those against legalisation and those opposed] seemed disconcertingly similar to me because they talked of sexual identity as the core of a person, the most truthful, innermost part, [suggesting] that same-sex acts are the basis of one’s sexual identity.” The assumption that sexual identity is an unchanging essence—with no room for sexual acts that don’t conform to that identity, for sexual desires that don’t crystallise into acts, or for the idea that sexuality could be anything between acts, desires and identity—bothered Menon no end. “Grounding desire into fixity and using sexuality to define the core truth of an individual” did not make sense to her, and this led her to come up with her present theory.

Menon argues that before Lord Macaulay penned the Indian Penal Code of 1860, homosexuality was not categorised or delineated as a rigid sexual identity. By deeming it illegal, the British Raj succeeded in constructing a fixed sexuality for the State to judge one way or another. Menon attributes this to the Victorian mindset of the IPC’s author and his times, and draws parallels between their attitudes to homosexuality, Urdu and later dastangoi. For Menon, this was a result of their contempt for anything spontaneous, culturally amalgamated and therefore not necessarily ‘pure’.

Dastangoi, the art of storytelling, is the practice of reciting epics, often medieval romances, that are passed on orally from generation to generation. Telling tales of adventure, magic and warfare, these dastan mapped new worlds and horizons, encountered the unseen and followed heroes through many travails and lovers. The hero’s adventures could sometimes be part of a mystical quest; at other times, it was a purely profane tale. In the process of telling a story, its narrators freely borrowed tropes and themes from other stories. In her talk, Menon used the tale of Chouboli, a popular feminist narrative, to emphasise her point about the open fluidity of desire.

Princess Chouboli has vowed that she will only marry a man who can make her speak four times in one night. Twenty-four princes have tried and failed and are rotting in the dungeons, grinding fodder for horses. A brave and valiant Thakur, one who shoots 108 arrows through his wife’s nose-ring every day, day after day, also wants to try his luck. What happens to him? How will Chouboli be won?

Containing a story within a story within a story, Chouboli is a funny, bitter, sarcastic and lyrical take on Indian life. The Thakur’s second wife, in order to save his honour, disguises herself as a man and persuades the princess to say four words. Menon talks of the chemistry between the princess and the faux man and goes on to state how the two women live happily ever after with the Thakur serving the purpose of protecting their land—drawing the conclusion that women, through time immemorial, have been drawn by their desire, not only to men but also women who charm them.

She supports this claim by referring to queer readings of Shakespeare’s Twelfth Night, in which Olivia is in love with Viola without really realising that she is in fact a woman, and of The Merchant of Venice, in which Portia dresses up as a man in the last scene to deny old Shylock his pound of flesh. These literary references, along with Choubouli, serve to bolster Menon’s central points—that sexuality and desire have always been fluid, and that it is the State that creates rigid sexualities in order to control and—in some cases—harass minorities.

Besides literary references, Menon also briefly touches on Sufi mysticism, talking of the idea of the Beloved and how Sufis must try and transcend their bodily forms and limitations in their search for God. The professor treats this world as natural, compared with the unnaturalness of a non-lucid world in which one must categorise oneself as this or that, in reaching her talk’s conclusion that we are all lesbians as much as we are not.