Vicky Kaushal, one of Hindi cinema’s most sought-after faces, is striving to break the mould with every film 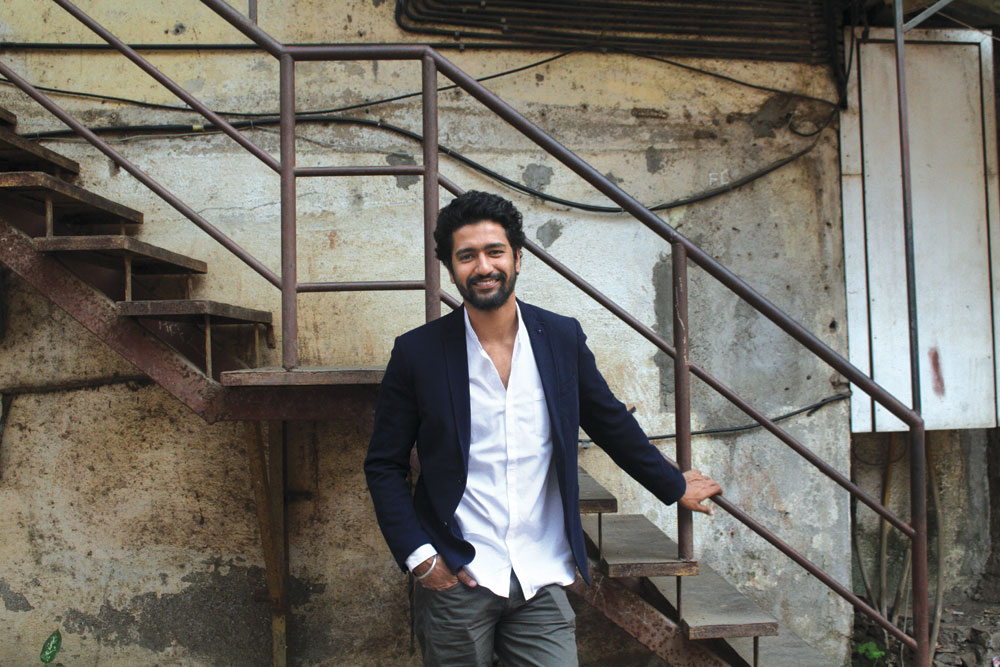 THERE’S AN evening scene in Masaan (2015) where Vicky Kaushal’s character Deepak mourns the death of his beloved Shalu, on the ghats of Benaras. He gradually breaks down as he recites lines from a poem she loved. A train whistles faintly in the background. “Tu kisi rail si guzarti hai, mein kisi pul sa thartharaata hoon,” he says. There are very few poignant moments in film today that seem so real that you forget you are just watching good cinema. This is one among them, with Vicky at the centre of it. “The scene was completely improvised. I was not supposed to break down but I did exactly what I felt at the moment, and thankfully the director did not call cut,” he says, with a hint of pride.

It was not an easy role to debut in. Director Neeraj Ghaywan chose him to play the part of a boy from the Dom community in Benaras, who traditionally cremate bodies for a living. In the film, he is torn between his roots and his love for an upper-class Brahmin girl. And anyone who has seen Masaan can avouch that it was one of the most sincere performances of the year.

“You need to be alive in the scene, and breathe in that moment. No preparation is as important as that,” Kaushal says, sipping coffee. In a crisp white shirt and jeans, with his trademark stubble, he almost looks and sounds like he has been in the business for a while, but these are just words from an ambitious man who has been working on his craft.

He doesn’t have a six-pack but has a smile which could pass him off as the boy next door. He realises he’s a beginner with a long road ahead of him, and revels in his ‘ordinary’ appearance, which allows him to play the role of everyman. Eight months into his first release, Kaushal is coming to terms with the tepid response to Zubaan. “I’m lucky because in a way both Masaan and Zubaan are my debuts. I shot most of Zubaan before I got Masaan and I used my experiences with both films to work on the other,” he adds.

Kaushal represents the face of the new, independent actor in Bollywood, thanks to his choices. Son of action- director Shyam Kaushal (who worked on films such as Slumdog Millionaire), many believe that Kaushal belongs to the breed of star sons and daughters, who get it all on a platter, compared to the rest. But his story is different, perhaps because he saw his father make it from scratch.

I go to Prithvi Café and see many Deepaks—those who have come to this big city in pursuit of a dream. I may not
know his story, but there is a story for sure

“My dad came to Mumbai from Punjab and started working as a stuntman only because there would be daily wages and he did not want to sleep hungry. He had an MA in English literature and dreamed of becoming a lecturer, but his family couldn’t afford the training fees. Today, he’s a self-made man. I have seen my dad work hard, make sacrifices and build his way to where he is today,” he says.

FOR A 27-year-old who has just started his film career, Kaushal does sound serious, and this earnestness reflects in his work. He was born at a chawl in Malwani, Malad, and saw his father working as a stuntman in films. As children, neither he nor his younger brother was interested in hanging around on sets or meeting stars. They were raised to follow an academic career and look at films as recreation. “When dad would go to work, for us it was like any other father going to office. We did not care about going to sets or seeing what he did. He used to be away a lot, and when he was around all, we wanted was for him to spend time with us. As a kid I was on stage a lot because it was the only place where I’d be completely uninhibited and shameless. But even that was never with the intention of becoming an actor,” he says.

It’s another story that Kaushal in pure filmie style tore his first offer letter after graduating as an engineer, in order to follow his heart. “I’d been for an industrial visit in my last year of college to some office in New Bombay and when I saw all those people sitting behind their computer desks, something snapped within me. I did not want to do this. I knew that. And when I asked myself what is it that I really enjoy, all the answers led to performance.”

Even then, he did not dream the superstar dream. As a child he remembers visiting Hrithik Roshan on the sets of Fiza (2000), but it was the assistant director’s job that caught his fancy. “The AD was almost the most important person on that set. He was in the madness, in the thick of things, doing everything to make that film happen. I wanted to be there, I wanted to understand what this world was all about.” His father had warned him; “Do not become an actor because you think your father is in the industry. If that’s your motivation don’t do it. This will be your battle, not mine.” It turned out to be the biggest lesson for Kaushal.

As a kid I was on stage a lot because it was where I’d be uninhibited and shameless. But even that was never with
the intention of becoming an actor

“I did not have any delusions of being a star. I knew I had to fight, no matter how long it took. I went straight to Anurag Kashyap who hired me as the last AD for Gangs of Wasseypur (2012),” he says. That was his acting school. They worked on a bare minimum budget and would be on set for 18 hours at a stretch at times. He wanted to be in the thick of it, and there he was, holding the clap board and filling continuity sheets for Manoj Bajpayee and Nawazuddin Siddiqui. “I loved every minute of it,” he confesses.

He knew he wanted to be part of this kind of filmmaking and stories that were real, drawn from and as brutal as life. He understood that acting wasn’t about how you looked or how popular you got. The mark of a true actor is a lot more than that. “I used to watch these brilliant actors perform and I realised that it was their experience with stage that made them so organic,” he adds. He soon started working in theatre with directors like Manav Kaul and Naseeruddin Shah, to train the performer in him. “I remember I was rehearsing a scene from a play called The Caine Mutiny Martial and I was being directed by Naseer Sir. I was nervous as hell but when he said I had done a good job, I thought I was at least on the right track.”

It is refreshing that Kaushal is among those new actors who believes it is imperative to understand the craft of acting. He did not get lost in the garb of making a career by training in the gym and making social appearances. “I knew that theatre was readying me for life, and it was when I started performing on camera that those experiences, which I had on stage came alive. You don’t have an option when you are live in front of an audience. You can’t think and act. You have to be there.”

For Masaan, he lost seven kilos, went two shades darker, spent weeks at the ghats living the lives of the people he was supposed to play on screen. His body language, diction and presence proved that he was a performer who had worked hard on being effortless and believable. “What happened with Masaan was that it changed me from within. Being on the cremation ghats made me very grounded. Main ghanto chitaaon ke bagal mein rehta tha. I realised aap jo bhi kar lo, ultimately your body will be lying on those logs. It just pulled me down to reality,” he says.

Today he is among the top choices for a new face and is working with directors such as Aanand Rai and Anurag Kashyap. He recently finished shooting for Kashyap’s thriller drama Raman Raghav 2.0 opposite Nawazuddin Siddiqui and it’s like life’s come a full circle. “A few years back I was delivering claps for them and today I am working as an actor with them. It’s a bit unbelievable sometimes, but when you work with people like Nawaz sir you understand the importance of what you are doing. Even after so many years, his vibe is so ordinary, he keeps searching for new things to do, and is always discovering something within himself. It’s so inspiring,” he adds.

It’s just the beginning of the road for Kaushal and more than anything, he wants to stay true to the adulation coming his way. He doesn’t want to forget his roots. “I go to Prithvi Café and I see so many Deepaks sitting— those who have come to this big city in pursuit of a dream. I may not know his story, but there is a story for sure. I’m an urban kid and my life is a lot easier than theirs. That’s made me understand: stay with today, live today.”