Tyranny of the Casting Director

It is true. And sometimes they do not even bother to couch their demands in dignified terms 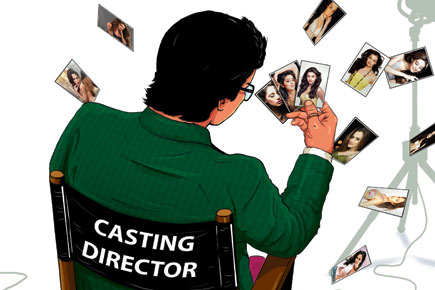 It is true. And sometimes they do not even bother to couch their demands in dignified terms


It was time to try her hand at Bollywood. She had already acted in a Tamil and a Kannada movie by the time she arrived in Mumbai from Chennai around three months ago. She met a casting director soon after, and he got straight to the point—that she would have to take a call on sleeping with someone for a role, and he was the first person she would have to please. “I was amused,” she says, “But I have been told this is the norm. They tell you straight up so that you don’t have any expectations. All you need do is take a call and then stick with it. I suppose once you decide, it’s easy. And unlike the older days, when you had to impress directors, now it’s casting directors.” She has not taken that decision yet, she says. She has not rejected anything either, but is wary. “They start by saying ‘Why don’t you start with me?’ Everyone wants to screw you. They even want something in return for telling you where a particular audition is taking place. Sometimes these casting directors put you on to the wrong people—who just want to have fun with you—and get paid by them in return.”

There are other stories like hers. Another 28-year-old actor from Delhi has been trying to bag a role as a hero for about a year now, having worked as an assistant director for a while. He is from a middle-class family living in Lajpat Nagar, and says he has had to suppress his moral code and psyche himself into being ‘okay’ with all that he hears of casting directors. He still can’t believe some of the things they ask of aspiring actors. “Obviously, you need to do a lot of ‘sir, sir’ and ‘ma’am, ma’am.’ If you behave normal with them and don’t suck up, they get offended. You need to behave as if you are lower than them—like always being the passive one. You have to call them thousands of times, and even then, it may not work.” The few chosen ones are usually sycophants. “There are a few who call you home to ‘discuss’ your prospects,” he says, “And there are a few like this male casting director I’ve heard of who wants male actors to strip—to see their penises. It’s just the way it is now. Actors are vulnerable people. There are too many of us, and too few roles.”

Atul Mongia, who has been the casting director of movies like Love Sex Aur Dhokha, Ragini MMS and Shanghai, says that the tyranny of casting directors is here to stay because they act as points- people between actors and directors before a film project begins. “A lot of people abuse that power,” he says, “They need people sucking up to them and they constantly push their own actors without really thinking about the role. The demand and supply ratio in Bollywood is skewed—there are lakhs of actors for one role. So casting directors know they can get away with stuff. It depends on what kind of person you are… most don’t use their power responsibly.”

However, adds Mongia, casting directors also feel harassed by actors. “I have stopped taking calls from unknown numbers because then they want you to meet them rightaway,” he says, “That’s not possible.” There have been reports of aspiring actors threatening Mukesh Chhabra, who has cast movies like ABCD and Gangs of Wasseypur and is working on Raj Kumar Hirani’s PK; his car was vandalised and a bunch of them turned up at his house.

Honey Trehan, who cast Matru ki Bijli ka Mandola, says that though a few casting directors take advantage of their position, they do this because 90 per cent of all wannabe actors signal themselves as available. “They call you and say, ‘Come over for dinner’ or ‘Let’s hang out’. But as a filmmaker, I know that doesn’t work for me. I cast according to the character [needed by the film], not according to what [aspirants] do. It’s sad that because of a few, the whole casting director fraternity has been maligned.”

A 27-year-old male actor, who came to Mumbai from Delhi two years ago, says he is still struggling because he has not slept with a casting director yet. “I can’t get myself to do it,” he says, “They make you run around and don’t take your calls. It’s a bit insulting. I have also heard that if you don’t sleep with them, it’s all over. A friend of mine had contacted a gay casting director, and once he said he won’t sleep with him, he was never contacted ever for a role again. He has gone back to Delhi now.” Wannabe actors, he feels, should take a joint stand. “If you don’t agree, how will they take advantage? And if everyone refuses, then they have no choice but to work properly.”

A 24-year-old aspiring actress from Bangalore says that though some of the horror stories about casting directors are true, most of it is only gossip. “There are people who hit on everyone and everything,” she says, “As an actor, you need to take a decision and not regret it. But most casting directors are only intent on finding talent, that’s all.”

Showbiz is sleazy business. Yet, for every shady sort, there is also a good professional, says Neeta Shah, author of Bollywood Striptease and a business manager at a production house. Her book, which chronicles her experiences in the film industry, mentions many encounters with casting directors. “They are specialised people, as they know scripts well and ease the work of directors,” she says, “They are very important for this industry and are hence in a very powerful position. There are many good and genuine casting directors. But there are many bad ones too. They boast of casting for big- time directors and producers and tell actors that they can get them shortlisted for a movie. So many just sleep with them, and there is no guarantee of anything. And it’s not only men who suggest the dirty. There are also female casting directors who indulge in the casting couch.”