Two recent exhibitions blur the distinction between portraiture and ‘performance’ 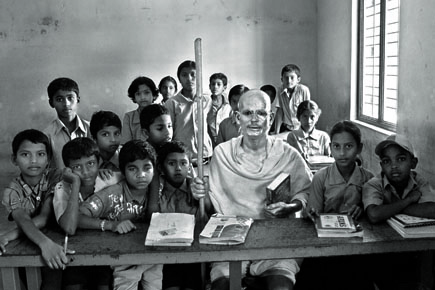 Truth and Theatre: Two recent exhibitions blur the distinction between portraiture and ‘performance’


The wonderful 1982 Hindi film Shriman Shrimati is about a middle-aged couple (Rakhee Gulzar and Sanjeev Kumar) who go about the country solving domestic problems in middle-class households caught on the horns of a tradition-modernity dilemma. The film has a marvellous opening sequence that showcases one such dilemma.

The feisty, trouser-wearing, ‘modern’ Aruna (played by Sarika) and the charming, sari-clad, ‘traditional’ Veena (Deepti Naval) are childhood friends. One day, Aruna (a rich man’s daughter who owns a camera with a tripod) decides it would be fun to photograph herself and Veena wearing each other’s clothes. A reluctant Veena is cajoled into posing in Aruna’s pants and sleeveless top, while Aruna is photographed looking demure in Veena’s cotton sari. The photographs duly find their way to prospective grooms who, misled by the play-acting images, marry the ‘wrong’ girls. Great unhappiness ensues.

Shriman Shrimati can be read as a barometer of the anxieties of 1980s’ India: how to ‘contain’ the transgressive modernity of women and channel it in directions perceived as socially legitimate. These anxieties are still with us, though perhaps in new forms. But what I want to draw attention to is the photo mix-up because it highlights a different kind of anxiety, one that cuts to the very foundation of how we understand photography’s role in the world: do photographs simply capture reality, or do they create it?

A recent exhibition of photographs titled Studio Suhag at Delhi’s Art Heritage Gallery provoked just this question. The pictures were taken by Suresh Punjabi at his little photo studio in the town of Nagda, Madhya Pradesh, between the early 1970s and late 1980s, and are all portraits in black-and-white shot against one of the backdrops offered by Studio Suhag. Visual anthropologist Christopher Pinney, who curated the show, first met the photographer in late 1982 when he arrived in Nagda to do fieldwork. Pinney has been back nearly every year since, and some of Punjabi’s images feature in his book Camera Indica: The Social Life of Indian Photographs. The recent exhibition was occasioned, in part, by a storm that destroyed much of Punjabi’s neatly-ordered archive of negatives, leading Pinney to salvage what he could.

Many of Punjabi’s customers wanted what he calls ‘banking-vanking’ photos: standard front-facing half-length portraits shot for ration cards and bank loan applications. But many other clients were unmarried young men and women, and Punjabi divides the pictures he took of them into two categories: ‘bhejna’ (Hindi for ‘to send’) and ‘istyle’ (style). ‘Bhejna’ images are commissioned pictures to be sent out to families of prospective partners, while ‘istyle’ images refer, in Pinney’s words, ‘to a genre of portraiture made for the theatrical pleasure of the customer’. What happened in the case of Shriman Shrimati was not just a mix-up between two girls; it was a mix-up of ‘istyle’ and ‘bhejna’.

An image meant for ‘bhejna’, Pinney writes (in Artisan Camera, the beautifully produced though somewhat hurriedly edited hardback volume from Tara Books that accompanies the exhibition), must manifest the sitter’s beauty or handsomeness, but it ‘must not have too much ‘glamour’ or be too ‘theatrical’. There must be ‘nothing that would indicate that a prospective bride is ‘zyada advans’ (excessively advanced), because such girls ‘will cause trouble for their in-laws’.

The zyada advans picture in Shriman Shrimati snags the hapless Deepti Naval a zyada advans husband, but the photograph of the girl in Studio Suhag gazing adoringly at a bunch of fakely luscious grapes was unlikely to get her married. Nor was the young man who cast himself as a sort of Devdas figure—with his head laid on his arm and a glassful of ‘whisky’ poured from an open bottle of coloured water—likely to have been looking for a wife. Lovelorn drunkenness might be a heroic trait in Hindi cinema, but not in prospective marital partners.

It is unsurprising to me that most of the ‘istyle’ images, involving the overt staging of identities, feature men. Cinema is clearly a popular source of inspiration.

The young man in white flared pants and dark sunglasses is indubitably channelling an 80s Amitabh Bachchan, as is the one with a flower in his lapel, holding the receiver to one ear while placing a leather-booted foot on the telephone table. Other men are content to partake of cinema’s glamour by association: one is photographed with a camera slung over his shoulder, flipping through a film magazine; another hides his eyes behind dark glasses, even as Sanjeev Kumar’s eyes smile brightly at us from the cover of the Mayapuri he is reading.

There are plenty of women in the Studio Suhag images, but most of them appear with husbands in photos affirming their conjugal bonds, or with babies, or with a brother on the occasion of Rakshabandhan. The few women photographed solo look almost ‘natural’ in comparison with the men, until you realise that two different women are posing in the same ‘Kashmiri belle’ jewellery popularised by Hindi movies like Kashmir ki Kali: really long jhumkas and ornate hathphool, a kind of jewelled tracery covering the hands. Like the telephone, the ‘whisky’ bottle and the magazine, the jewellery turns out to be only a prop.

When you dress in your best clothes for the camera, and put forward your most serious/most attractive/most youthful self, you are always already performing, presenting a persona. Is the bandmaster who poses in his own uniform that different from the young fellow who wears a neckerchief and sticks a cigarette in his mouth? Can a distinction really be sustained between what Pinney calls ‘truthful solemnisation’ (of what already exists) and ‘potentially deceitful theatricalisation’ (the photo-as-makeover or actualised fantasy)? That is the question with which Studio Suhag confronts us.

One sort of answer to that question is offered by the show that ran parallel to Studio Suhag at Art Heritage: My Life Is My Message. The photographer, Shivaraju BS, has a remarkable backstory—he is a policeman in Bangalore who started taking photographs after being exposed to contemporary art at the art collective 1. Shanthi Road. Cop Shiva, as he calls himself, is, in his own words, “fascinated with the idea of masquerade and the roles people play in public and private”.

The photographs here are a documentation of two men who impersonate icons: Vidyasagar, who dresses up every day as the late Tamil matinee idol MGR, and a teacher named Bagadehalli Basavaraju, who regularly incarnates the Father of the Nation. Vidyasagar stages himself carefully as MGR; Basavaraju, in white loincloth, round spectacles and a stick, appears to be doing the same. But the attempt is not to pass off as Gandhi, like an actor in some film. The painstakingly applied silver facepaint gives him a strangely otherworldly quality; a Brechtian manner of drawing attention to the performance and the gulf that separates Gandhi from us.

Writing about the circulation of national images, theorist Partha Chatterjee once contrasted the romantic proximity of historical ‘inhabiting’ (potentially offered up by photographic detail) with the decontextualised sacredness of the icon—more often than not shorn of detail so as to appear timeless. Cop Shiva’s images of Bagadehalli are superb because they destroy such easy binaries. The silver-faced impersonator draws his audience in with the appeal of the iconic Gandhi image, but consciously unsettles our expectations of timelessness. This is not done cheaply through the simple use of shock, which would be easy enough to do with a figure like Gandhi (think of him downing whisky in a dance bar or with his feet up on a corporate desk). What we get instead is a marvel of complexity. In one image, a middle-aged man in a veshti folds his hands in a prayerful namaskar, while several schoolgirls around him seem distracted and unconvinced. In another, he ploughs a field with a pair of bulls, looking both more and less convincingly representative of the rural India he so tirelessly championed. In yet another, Gandhi seems to ride towards us at the head of a group of motorcyclists, until we notice that Bagadehalli is the only one on a cycle—our only non-fossil-fuel vehicle. Is the cycle in front because it’s going to win? Or does its presence simply point to the inescapable fact that Gandhi’s greatest bugbear—speed—has already won the race for modernity?

What is remarkable about these images is their ability to evoke something much more complicated than history, or even nostalgia.

‘This performance of a past for the present,’ writes Pinney, ‘always introduces something new.’ The ‘theatricalisation’ here is foregrounded. There is no question of it being ‘potentially deceitful’. Instead, in the best tradition of fiction, it produces a new kind of truth.