Though This Be Madness, There Is Method In’t

After sixteen years of work, Surjit Hans’ mission of translating all of Shakespeare into Punjabi is nigh an end. 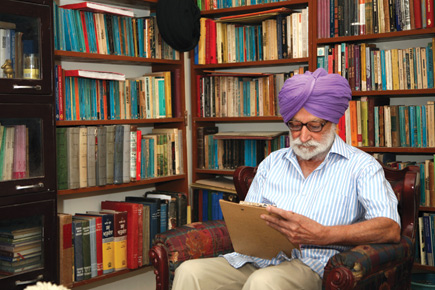 After sixteen years of work, Surjit Hans’ mission of translating all of Shakespeare into Punjabi is nigh an end.


It is still mid-morning when I land up to meet Surjit Hans at his Phase XI Mohali residence. The numbered linearity is an imposition from neighbouring Chandigarh, which has managed to stamp a certain sense of order on the disorderly rambunctiousness of Punjab. As the traffic makes evident, this is not an order that has seeped into the spirit of its residents.

Hans meets me at the door in a vest and lungi, book in hand, and ushers me into a large room. Even before I can look around or take a seat, he turns to me, “Don’t ask for juice, I don’t keep any, I can’t offer you tea or coffee because there is no one around to make it. Just make things easy for me and accept a drink.” The beer is already lying chilled in the refrigerator awaiting my arrival. As he walks to the kitchen to pour the beer, I flip through a slim hardcover Punjabi book lying on the table—Prem Parishram Patan, his translation of Love’s Labour Lost. His 79 years sit lightly on him. By the time I leave late in the afternoon, we have made serious incursions into his stock of bourbon after having run through half a dozen bottles of beer.

Back in Delhi a few days later, I read these lines from his translation of Hamlet:

(This heavy-headed revel east and west/ Makes us traduced and tax’d of other nations; They clepe us drunkards, and with swinish phrase/ Soil our addition; and indeed it takes /From our achievements, though perform’d at height, The pith and marrow of our attribute)

The translation follows the original line by line—you want to locate line 20, Act II, scene (i), in the Arden edition of Hamlet, all you have to do is look at the corresponding line in the translation. The iambic pentameter of Shakespeare has given way to the chaupai in Punjabi, but what matters is that these lines are almost as resonant in Punjabi as they are in the original English. They work well when read aloud, as Shakespeare is meant to be, and there is little here that a Punjabi can’t take to heart. Indeed, the heavy-headed revelry ‘takes from our achievements, though performed at height’.

For Hans, it is hardly a surprise that much of Shakespeare does resonate so in Punjab. “For the English, Shakespeare is something sacred,” he tells me, “They are incapable of a natural response. Our response, on the other hand, is not born of ritual admiration. The plots make sense to us, you want to read King John, think of the story of Aurangzeb. Take the Two Noble Kinsmen, and the plot is no different from any Hindustani film. Two cousins fight over the same woman. One claims he has the right to her hand because he loves her more, the other says she is his because he saw her first. They both die fighting.”

Hans doesn’t have to say it, but even as we speak, somewhere in a Punjab village, a similar story may well be playing itself out. There are other correspondences that may be mapped too. “We share an attitude with the England of Shakespeare’s times—it extends to matters such as wine, women, wealth and even sex. The psychology of death is similar.” There are differences as well. For one, Hans is quick to point out, Punjabis lack the idea of courtesy that is so central to English culture.

Hans was 63 when he first started work on translating Shakespeare into Punjabi. As many as 27 of the plays are already in print, brought out by the Publication Bureau of Punjabi University, Patiala. Four are at their proofs stage, and that leaves six to go. Perhaps no other Indian language can boast of a similar achievement—a consistent and academically sound translation of the entire Shakespeare corpus.

When he began work on his translations, he was already a well-known figure in Punjab, retired from Guru Nanak Dev University in Amritsar, where he had once been head of the department of history, having done extensive work on Sikh literary sources and in particular the Janamsakhis, the tales that surround the birth and life of Guru Nanak, the faith’s founder.

Hans was one among a group of academicians who brought historical rigour to the study of Sikhism. In doing so, these scholars aroused the ire of many who believed there were elements of the faith not open to scrutiny. Even today, a mere glance at websites run by the Khalistani remnants who survive in the UK and Canada will throw up references to an alleged ‘anti-Sikhism’ school. Hans still figures prominently on the list.
Hans summed up the controversy in a piece he had written about the renowned historian of Sikhism, Hew McLeod, a New Zealander who died earlier this year: ‘The medieval structure of understanding expected miracles, auguries, ghosts, fantastic creatures and unnatural events to appear any moment. Bertrand Russell has remarked on the change of mental structures. Medieval man believed in miracles even when they did not happen; we will not believe a miracle even if it did happen. Sikh theology does not believe in miracles. The ideal is to keep spiritual power under wraps. Guru Tegh Bahadur preferred martyrdom to any show of miraculous power. Guru Ram Rai was sidelined precisely for that. A large number of pious Sikhs, ignoring Sikh theology, have been offended by McLeod for his scepticism about the miraculous wonders of Guru Nanak. The anti-McLeod faction of Sikh intellectuals has thrived more on popular psychology than on scholarship.’

How, I ask him, did Shakespeare figure in all this? He answers with a straight face: “Self improvement and to give myself something to do.” He then adds with a laugh, “I began at 63, with a mature, not senile approach to Shakespeare.”

He started with the bard’s tragedies, the plays that have daunted many a high school and college student down the ages. “No, it was not difficult—aukha te koi kam nahi honda (no work is difficult)—but one of the most common problems is that even in English many words no longer mean what they meant in his times. ‘Lawn’ for Shakespeare was a piece of linen and an ‘engine’ was a scheme, a method.”

He has preferred to stay with the original meaning even though some would question it. ‘To be or not to be’ for him remains ‘jina ki nahin jina’ as it was for Shakespeare without the existential angst that later centuries have added. Of course, existential angst would not carry much weight in Punjabi in any case. So that’s just as well.

“It was the jokes,” he says, “that were difficult to handle. I often had to find substitutes. Shakespeare thaira badmash si (was a rogue). Take an instance where he uses the word ‘meddler’—it is a fruit eaten as it begins to rot and he draws a comparison with the female organ. Bada haramzada si, ki karoge (he was quite a bastard, what can one do)? Thankfully, I had my own storehouse of anecdotes which I could draw upon and I was not hampered by academic niceties. There is a place in The Noble Kinsmen where a doctor tells a wooer who suffers from fits, ‘And when your fit comes, fit her home’. Now in Punjabi nothing works better than ‘jadon fit paindi hai, odon fit kar dain’.”

That is perhaps far truer to the spirit of Shakespeare than anything that can be conjured up by a more pedantic approach. For Hans, self-consciousness about language is a barrier.

“I studied till class ten in a Punjab village. The village rustic is not self-conscious about his language. Self-consciousness comes from knowing another paradigm. For the villager, language is play, it is his to toy with. The educated, on the other hand, fear it. Published vocabulary is much more limited than a villager’s vocabulary. You can see the same thing in Shakespeare, his language is far richer than a modern dictionary.”

At the same time, he says he has not been afraid to reach out to Sanskrit for help wherever needed. There are words in common usage in Punjabi whose etymology makes them richer. Take, for instance, he says, the word pallia, to look after—it also means flesh. The play on words this makes possible is best illustrated by a word in common Punjabi usage, yab (noise, racket). Well, he says, and the twinkle is back in his eyes, yab is actually a description of the act of sex, the association with noise obvious enough and of great use in translating Shakespeare who abounds in such double entendres. This, he says, certainly counts as self-improvement. A folk language, he adds, is not sufficient for writing erotica, which requires a language where much can be expressed without sounding offensive. “I believe,” he says, seeking to provoke prudes the very way he once provoked the pious, “I can now write some excellent pornography in Punjabi.”

Pornography apart, the years of translation have left him slightly disillusioned with Shakespeare, and his iconoclasm comes to the fore once again as he explains, “Ullu de pathhe nu anvain dang te chadhaiya hai, plot te labda nahin hai (that owl-taught oaf has unnecessarily been put up on a pedestal, he hardly has any semblance of a plot).” He believes colonialism and the work of men such as William Hazlitt, the nineteenth century essayist who wrote the first comprehensive study of Shakespeare, came together to make him the icon he is today.

Self-improvement, he admits, more seriously, is not the only reason he took up the translation. “English da khaira chhudana hai (we have to break the shackles of English),” he says. The hegemony of ideas, and his years as a prominent Leftist in Punjab surface as he says this, has come to us through English—ideas such as globalisation and liberalisation. The young in Punjab need a vocabulary that rids them of this hold. His objection to the language, he qualifies, is not literary but political.

(You taught me language; and my profit on’t/ Is I know how to curse. The red plague rid you/ For learning me your language!)

It will take him another two to three years before he is done with Shakespeare. It is then, he feels, at the age of 82, that he could take up something more challenging—the translation of Adam Smith and Darwin into Punjabi.

For a while we discuss the difficulty of coming up with an entirely new technical vocabulary in Punjabi. Then, as I finally get up to leave, the bourbon dropping at an alarming rate, I tell him we would need to send a photographer to capture him at work, translating the 1,000 words a day that have added up over the years. The photographer is welcome, he says, eyes atwinkle again, “None can ravish me, I am so willing!”

I have to go back and check the reference. It is from a 1608 play, The Faithful Shepherdess, a collaboration between two of Shakespeare’s contemporaries, Francis Beaumont and John Fletcher. Befittingly, Hans’ learning sits lightly on him. And true to form, when our photographer, unfortunately a teetotaler, makes his way to Hans’ home a few weeks later, there is a bottle of whisky awaiting him.