They Are Not Exactly Comics

They are political books. Just that everything isn’t merely spelt out, it’s also sketched. And as Indian graphic novels get more and more ambitious, they’re busy re-imagining history, Ambedkar, The Emergency, Jurassic Hyderabad and a lot more. 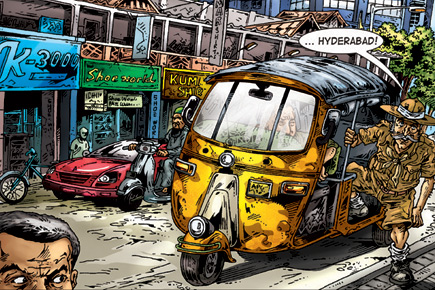 
About the Dandi March, we know. But the Mahad Satyagraha? It draws a blank, though this watershed event in Mahad, Maharashtra, exposes India’s freedom schisms. In 1927, 3,000 satyagrahis were striding towards a public lake for a sip of water, led by a tall bespectacled scholar with MA, PhD, MSc and DSc degrees. As his followers were attacked, the scholar, Dr BR Ambedkar, shouted: “Don’t strike back!”

Though Gandhian, it was a satyagraha that pitched Mahatma Gandhi versus Dr Ambedkar. The Dalit satyagrahis were assaulted by Hindus, not Whites. Despite the 1923 British legislation allowing ‘untouchables’ to use public water bodies, Dalits were (and are) denied this right. As this schizophrenic Swaraj movement built up, Gandhiji asked Indians to burn clothes made in Manchester, while the Dalit Declaration of Independence of Dr Ambedkar burnt the Manusmriti, which was written in ancient India.

The above isn’t from a chapter of a history book. These are scenes from a soon-to-be published graphic novel that captures caste fault lines. Some 2,400 years after The Ramayan, Dr Ambedkar stares out of the pages of Bhimayana—as a Dalit-prophet who’s faced equally enduring ‘experiences of untouchability’.

S Anand, founder of the imprint Navayana, says, “Ambedkar’s struggles are erased from public memory.” Though a tall national leader, economist, barrister and orator, Dr Ambedkar is only seen in two distant dimensions— as a statue and as the author of our Constitution. To aesthetically resurrect this prophet, Navayana approached award-winning Pardhan Gond artists Durgabai and Subhas Vyam in 2008. It wanted them to illustrate Waiting for a Visa, Ambedkar’s Diary of Dalithood.

Injustice is an Adivasi issue too. “The artists were angered by the story,” says Anand. But when he shared his comic collection with them, they protested: “Don’t stifle us.” They re-envisioned Ambedkar in Gond-pointillism, dotting a Buddha-orange face, outlining Dalit-blue spectacles, filling specks-and-lines on an iconic raised hand. He’s set in an animistic Gond landscape where the train is a snake and tank is a fish (Anand scribbled text on its fins). In Mahad, Ambedkar’s mikes become surreal water sprinklers. As the unlettered artists interpreted caste politics, co-authors Srividya Natarajan and Anand, “re-edited 40 per cent of the text to suit the art”. Though unfinished, Bhimayana has lofty admirers. The legendary art-theorist John Berger wrote the foreword. A blurb by the great graphic non-fictionist Joe Sacco says, ‘By boldly using the Pardhan Gond tradition, Bhimayana conveys why caste and Ambedkar matter in India today.’

Slam-dunking readers face first into the past, by collapsing fact and fiction into ‘faction’, some Indian graphic novelists are drawing out history’s shadowy faces and facets with paint, ink, brushes and PhotoShop. In their hands, hindsight is a sharp-edged etching tool, which prevents these ‘comics’ from turning into coloured textbooks. Situated in a hibernaculam of history, the Hyderabad Graphic Novel Project (HGNP) is trying to fill in 400 years of a sketchy Deccani past with thrilling colour panels.

The Pao Collective’s anthology, will include Orijit Sen’s Kabir in charcoal imagery, Vishwajyoti Ghosh’s Lahore Reporting in pen and ink, and an 18th century Lucknow-Gothic story by Iram Ghurfan and Ikroop Sandhu. This effort will reach readers by the end of 2010.

Mainstream publishers also have graphic novels in their catalogues. The mood of the 19 muzzled months of India’s Emergency was recently evoked graphically by Delhi Calm, a book that took a relook at this expunged era with murky-brown brush-strokes. Its sepia-stained art drags you onto the capital’s hushed streets on 26 June 1975, ‘a day when Delhi hangs to its holder like a fused bulb’. “This is not Emergency for dummies,” insists author-artist Vishwajyoti Ghosh. At five back then, he was too young to understand why the State’s iron fist slammed down on civil liberties. He only recalls volatile arguments about politics, rising prices and dwindling salaries “suddenly happening in whispers, behind drawn curtains and closed windows”. Connecting his brushstrokes from The Emergency to life today, Ghosh says, “We now have an auto-censor fit into our systems.” Ask banished Indian artist MF Husain.

The move from T-shirts to a graphic novel was only a swap of protest media for Orijit Sen, an NID graduate who co-founded the ethical boutique The People Tree, in Delhi. He authored one of India’s first graphic novels, River of Stories, in 1994. “This anti-Narmada Dam Project comic actually got published with government funds,” he says with a laugh. A craving for black coffee, hot debate and a dog-eared collection of comics unites Sen with fellow graphic novelists. Their political degrees? Those they’ve got from the University of Life. Consider this quick scan of their day jobs in Delhi, Kolkata and Hyderabad: hoteliering, health care, publishing and advertising.

The arc of desi-political-graphica is inspired by Art Spiegelman’s Pulitzer prize winning work on the Holocaust, Maus, Marjane Satrapi’s award-winning Persepolis about life under Iran’s Islamic Revolution, and Joe Sacco’s illustrated-reportage in Palestine, which air-drops readers into the intifada. With eyes slit wide open by images in Maus and Persepolis, HGNP’s 31-year old Jasraman Grewal has teamed up with 30-year-old Jaideep Undurti. “Hyderabad is a 0.0 point on a Cartesian plane for us,” says Grewal. Though neither was born here, they claim their psyche’s been Hyderabadised. “The architecture of the city holds the blueprint of how a human mind will develop,” explains Undurti.

Somehow, this city’s minars, Irani cafés and congested gallis (bylanes) led them to ferret out facts about Marco Polo’s first sight of the Koh-i-Noor, studded in the turban of a Kakatiya queen, and surrealist-painter Rene Magritte’s revelations in La Golconde. They’ve recently published a sampler of their work online, the Late Cretaceous Incident, which adventurously ushers you into the era of Deccanausouras Rex. One look and you’re relieved. These first-time writers aren’t novelists, pulling out the lint of their own life to be stuffed between covers. “Our lives in a book would be even less wanted than a Swahili-to-Telugu dictionary,” quips Grewal, who’s busymining the unlucky history of the Hope Diamond, believed to be from Golconda.

Unlike them, Ghosh stared into a blackout. Today, even 35 years on, the heavy dark cover shrouding The Emergency can’t be lifted. Estimates of arrests, sterilisations and demolitions from 1975–77 that exist contradict each other. Won’t-be-censored newspapers printed blank pages. Janardhan Thakur’s book, All the Prime Minister’s Men, describes a Mephistophelean cabinet led by a prime minister with an insecurity streak. More recently, Ramachandra Guha’s tome India After Gandhi, even-handedly but briefly traced this period. But the grand cover-up continues.

Last week, in the Rajya Sabha, the BJP’s Ravi Shankar Prasad called the Union Carbide factory “an illegitimate gift of The Emergency”. Widely opposed, permission for the factory was granted in October 1975, and within nine years a noxious gas leak from this factory caused the world’s worst industrial disaster.   To portray this dark time in “sepia, a visual shortcut for memory, added a staid controlled feel”, says Ghosh,  who has specialised in applied art. For verve, he blended ideas with burnt sienna, chrome yellow and a judicious drop of black.

In Delhi Calm, stars of the hit film Bobby wonder about attending ‘the Prophet’s’ rally (alluding to Jayprakash Narayan’s first public meeting that united the Left, Right and Congress dissidents).

“By instructing Doordarshan to screen Bobby, VC Shukla, information and broadcasting minister, used a cherubic Rishi Kapoor and 16-year-old Dimple to keep people home and away from the rally,” says journalist Paranjoy Guha Thakurta. “I could have been a banker or economist, but The Emergency, which prevented elections even at hostel level, made me decide to be a journalist,” says Guha (he’s just written a report titled Paid News Corrupting Indian Democracy).

Graphic novelists are looking further back in history too. Sen, for example, is trying to translate Kabir’s verse into visuals. In his Delhi-based studio, sitting in front of an Apple Mac with his face lit up by charcoal-shaded spreads, he says: “Every frame of a comic is like a jump-cut that forces readers to imaginatively read between them.”

Stirred by the power of Kabir’s poetry, Sen is using “its rhyme as an editing device to shift the narrative between Gurgaon and Banaras”. As for this desi-political-graphica phenomenon, says Sen, “We’re at the stage right now where cinema was when it began. Who knew there would be war movies and Westerns?”