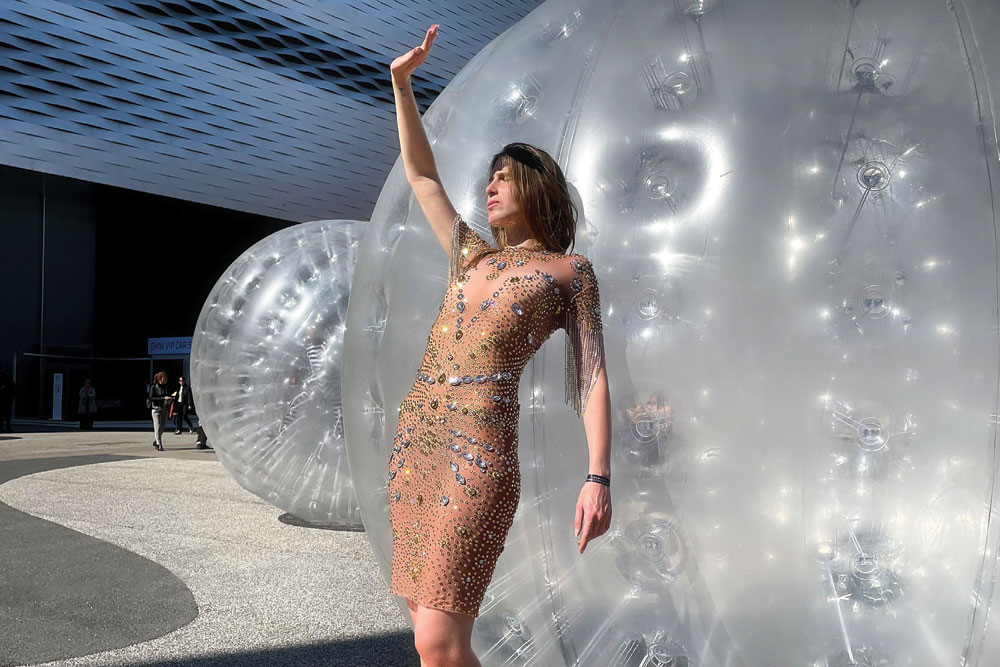 
Art Basel began half a century ago in a small Swiss city that has now metamorphosed into a major cultural centre within the region. This year (September 24th to September 26th) it was also the first major art fair post the lockdowns. It’s a sort of litmus test to judge the wellbeing of the global art market. The joy of returning to a real-life art fair after almost two years, where one could wander aimlessly, avoid people and studiously ignore the usual suspects was enough incentive to brave the mandatory Covid protocols of being fully vaccinated (yes, finally the Swiss relented and gave Covishield the green signal); else a recent negative test plus the presence of enough antibodies was mandated.


Perhaps the most telling change at the fair was the alteration in the tone and tenor. The snobbish vanguard galleries seem to have discovered a welcome humility and transparency, perhaps for the first time, while still dispensing tired obtuse humbug statements that art ‘experts’ spill to unsuspecting collectors and art aficionados alike. While few of us have pretended to enjoy digital experiences on the fly, nothing quite beats the haughty arrogance of in-person fairs, the forced neurosis of attending the must-do boring art parties coupled with indifferent wines and impoverished first-world small plates and others. The digital experience versus the in-person art fair is akin to retail therapy, and still packs that elusive allure despite the risks in a pandemic world. Missing in action was the typical Swiss handshake, and the mandatory air kiss was considered sheer blasphemy. Just in case you were allergic to dust, animals, men and women in black, immediate medication was imperative. The art world doesn’t take kindly to sneezing within its hallowed portals.

As you make your way to the entrance at Messeplatz you are seduced by the eye-popping performance by artist Monster Chetwynd of giant transparent zorbs filled with men and women in sequined leotards who create an elaborate poetic absurdity, a perfect antidote to the orderly hordes in black lining up at the fair entrance. Many of the 272 galleries that constituted the commercial part of the fair—save a few notable exceptions—showcased the same ‘never before’ exhibited pieces of the same old artists or the historical works of the same chosen few. Braving recent odds, the Indian art ecosystem was valiantly represented by galleries Chemould Prescott Road from Mumbai and Experimenter from Kolkata with director Shireen Gandhy and founders Priyanka and Prateek Raja in attendance.

In a world ravaged by Covid there was but a tiny fraction of work that alluded to the past two years in any meaningful way. But I particularly liked The Pause, a series of photographic works by Nadav Kander who commented, “The pandemic actually showed us how out of balance we are with nature and how we cannot continue with the habits we formed”

In a world ravaged by Covid there was but a tiny fraction of work that alluded to the past two years in any meaningful way. But I particularly liked The Pause, a series of photographic works from Nadav Kander who commented, “the pandemic actually showed us how out of balance we are with nature and how we cannot continue with the habits we formed.” The images are composed of quaint figurines he played with as a child, set against barren minimalist landscapes invented in his own London studio. The works were also well priced and sold at $9000 at the fair.

American artist Sheila Hicks’ textile work was priced at $600, 000 and Cindy Sherman’s portrait tapestry did get due attention. I have always enjoyed the glorious irreverence of Gilbert & George and their Art for All philosophy and was happy to see how every potential subject is matter for their art.

The main draw was the Unlimited sector curated by Giovanni Carmine, which made a welcome return with 62 large-scale projects broadening the sector’s intellectual range with conceptual works. To encounter such art in the flesh, at the scale it deserves, was a real joy. Some of the noticeable works included my favourite, The Senses (Sight, Taste and Hearing) by Francesco Clemente, an enormous tapestry in three parts in engagement with contemporary Indian visual culture. The work is a product of a collaboration with billboard painters in Chennai over a decade.

An AIDS painting from 1991 by the artist group General Idea also reminded us that Covid-19 is not the world’s first pandemic. The work made as a fundraiser for the first Art Against AIDS benefit in 1987 was perhaps one of the first examples of what we now call a ‘viral campaign’. Another mammoth work was Pictures at an Exhibition, 2018/2021 by David Hockney who in his practice has employed the Polaroid camera, Xerox, fax machine, Photoshop and the iPhone and iPad. This photographic drawing combining three-dimensional photography and modelling software is printed to life size. The viewer becomes nearly a part of the art.

A lot has been said about the art world’s focus on non-White artists as a current fad, but to see and our own Jitish Kallat’s Palindrome / Anagram Painting, being given the pride of place felt good. Taking the form of speculative abstraction, the works are an assembly of signs and imagery that evoke botanical, oceanic, celestial and geological formations to evoke evolution and entropy. As in a palindrome the painting can be read in multiple directions like an anagram. Another particularly relevant work was Destruction, by Japanese artist Tadashi Kawamata depicting vast panoramas of devastation caused by humans.

Another mammoth work was Pictures at an Exhibition, 2018/2021 by the iconic English painter David Hockney who in his practice has employed the Polaroid camera, Xerox, fax machine, Photoshop and the iPhone and iPad. This photographic drawing combining three-dimensional photography and modelling software is printed to life size. The viewer becomes nearly a part of the art

But the real happy coincidence at Basel this year was the much delayed opening of Foundation Beyler’s Close Up, a new exhibition of portraits and self-portraits tracing the evolution of portraiture from 1870 to the present through the works of nine female artists from Berthe Morisot to Elizabeth Peyton, including Frida Kahlo, Marlene Dumas and Cindy Sherman.Coming face to face with some of Frida Kahlo’s self-portraits, which turned her into a global icon was worth the trip itself.

Even though the pace at Art Basel 2021 was less frenzied and the parties less manic it is still intimidating to attend an art fair as the brain and eyes struggle to process thousands of works, where some are coherent but many nonsensical in a pandemic world. A quote attributed to John Baldessari, the conceptual artist who passed away recently sums it up best, “An artist going into an art fair is like a kid walking in on his parents having sex, you know it happens, but you never want to see it.”