The World Comes to Sankar

At 75, a Bengali writer who loves to claim his books have never travelled beyond Burdwan grabs international attention 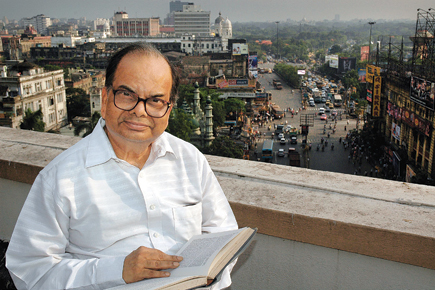 
When Mani Sankar Mukerji, or Sankar, as Bengal knows him, was researching his 1962 novel Chowringhee, a chance encounter with the excise collector opened the doors to all of Kolkata’s hotels and bars. “I heard you are writing a book about a hotel. You can’t afford to go to hotels or bars, and I can’t let you write an imperfect book,” the collector saheb told him. For a year, Sankar became ‘an inspector’, and gathered, as he says, “unbelievable material” for his bestselling novel from the city’s most notorious bars.

Forty-seven years later—and two years after the English translation of the book—Sankar is being rediscovered. At the recently-concluded London Book Fair, for instance, he was quite the rage. Writers like Vikram Seth offered to sit at his feet for photographs. The Guardian and Sunday Times, among other media publications, queued up for interviews. And people turned up in hordes to hear him speak of cities and literature. Chowringhee, now out in the UK in an Atlantic Books hardcover, is also being translated into French (by publisher Gallimard, which has Marcel Proust and 22 other Nobel laureates in its stable—“You won’t be lonely, the chief editor told me,” says Sankar) and Italian. Queries for translations into other international languages, too, are pouring in.

For someone who modestly claims that his 80 novels haven’t travelled beyond Burdwan (a West Bengal district bordering Bangladesh), this attention has been “too good to be true; too much for me to expect”. And you understand why once he takes you through his life’s journey from a chaprasi to a corporate honcho, from Bongaon to Bondel Road in Kolkata’s posh Ballygunge, where he now lives. Sankar’s two-and-a-half-year-old granddaughter walks in several times, demanding to show ‘dadu’ her favourite toy. He smiles at her indulgently, before turning back to narrate some gritty detail or the other about his humble beginnings.

Sankar was born in December 1933 in Bongaon, once part of Jessore in East Bengal. Soon after, his father, a lawyer, moved his family to Howrah. Though they had travelled only 48 miles from Bongaon, Sankar remembers being branded an East Bengali (or bangal, as opposed to a West Bengali or ghoti). Hence, he was also the target of several jokes—over the course of a decade, for instance, at least 200 dilapidated houses were pointed out to him as the high court. The popular perception then was that East Bengalis, mostly hailing from villages, weren’t used to city architecture and so could never tell the difference between the prestigious high court and other buildings.

Preposterous that—and Sankar decided to take revenge by giving ghotis an insider’s view of the real high court! Thus appeared his first novel, Koto Ajanare, in 1955. Sankar had been initiated into the high court by another ‘chance encounter’ with the last English barrister of Calcutta, Noel Frederick Barwell, who took him in as a clerk.

Barwell’s offer, however, came not before Sankar underwent many hardships. Tragedy befell Sankar’s family when his father passed away in 1947. Sankar, then barely 14, was left to fend for his family of eight. “I did all kinds of jobs, roaming the streets, hawking, cleaning, teaching, waiting on tables, to get by.” But the story Sankar loves to tell, with a glint in his eyes, is of the time he sold Lifebuoy to paan shopowners. “My apologies to Lever,” he chuckles.

“I was poor,” admits Sankar, “but like all Bengali intellectuals, oversensitive about my status.” So, when the literary czars at Desh, a popular Bengali magazine where his first novel was being serialised, wanted him to sign a book deal with their publishing house, he refused, and chose a publisher of his own. “My well-wishers thought I was finished… I was branded a one-book wonder,” he recalls. “The pressure on me was immense, I had to break that tag.”

Chowringhee, first published by Dey’s Publishing, arrived seven years later. By and by, Sankar moved into the corporate world, first as a PRO with the Railways, then on to Philips, Dunlop and the RPG Group. But the writer in him didn’t stop creating, leading at times to antagonistic life experiences. “A manager is expected to get things done through others. A writer is a lonely person; he suffers in isolation.” His corporate experience led to three remarkable novels, Seemabadha, Jana Aranya (both made into films by Satyajit Ray) and Asha Akhanka.

So, how did he straddle two disparate worlds? “When I became tired of being a corporate manager, I would go back to my writing for relaxation and vice-versa.” But Sankar admits it’s difficult. His run-rate—80 novels, a travelogue and a biography of Swami Vivekananda—is slow by contemporary Bengali standards, he says with a smile. “But when you have two professions, you live a dog’s life. And whole-time writing is a luxury Bengal can’t shower on us.”

Did he always have literary aspirations? “No,” Sankar nods vehemently, “but I had some incredible experiences.” And, it’s fair to say there’s a story lurking in every nook and cranny of his mind. He mentions how the words of a neighbour at Bongaon—“God has created villages and men have created cities”—has never been far from his mind. The man in question: Bibhuti Bhushan Bandopadhyay, whose Pather Panchali is undeniably one of the best novels on rural Bengal. “Left to myself,” says Sankar, “I would probably have been a chronicler of villages. But then, my family moved to the city’s west bank. Since cities are full of imperfections, they’re ideal for short story writers and novelists because we thrive on imperfections.”

Through the years, Sankar would get to know Kolkata intimately—how people in this city live, how they love, how they lie and how they die—as his readers are well aware.

Sankar is popular with his audience, even though critics carp that he isn’t a deeper explorer of human relationships. What clicks with many is the sense of optimism in his stories, the constant hope amidst despair.

At 75, Sankar is now working on a biography of Aurobindo—Achena Aurobindo.  He says he also wouldn’t mind writing his own autobiography some day, time permitting. “I have never had the luxury or the time to stand and stare. My life has been a strange hamper of neglect, success, unexpected success… and it’s been enjoyable,” he says.

And yes, most of all, along the way, Sankar has been able to “shelter my Bengali arrogance”. The world has come to him.