The Wizard of Jazz

Self-taught Indian American musician Vijay Iyer is wowing the world today. But he started playing the piano only to annoy his sister. 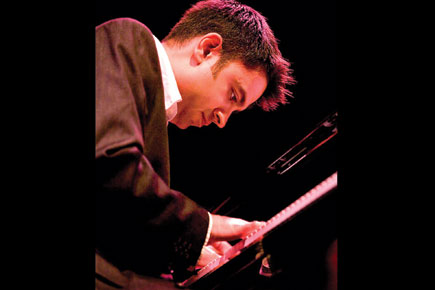 Self-taught Indian American musician Vijay Iyer is wowing the world today. But he started playing the piano only to annoy his sister.


When Indian American jazz musician Vijay Iyer was growing up in California, he was often dazzled by the percussion of Indian musicians who came to perform there. The rhythm seemed to him “flurries of activity that were ordered and yet so mysterious”. Iyer involuntarily gravitated towards this mystery and, over the years, taught himself to play the piano, seeking to fathom the depths of that elusive sound. Then, in 1991, he heard jazz composer Julius Hemphill play in New Haven, Connecticut. That, says Iyer, changed the way he felt about music and life.

Today, the 38-year-old Iyer has been acclaimed as one of the best contemporary jazz musicians in America. Chicago Tribune said of him, ‘There can be no doubt that pianist-composer Iyer stands among the most daringly original jazz artists of the under-40 generation.’ The Village Voice has described him as ‘the most commanding pianist and composer to emerge in recent years’. The New Yorker called him one of ‘today’s most important pianists… extravagantly gifted’, and the LA Weekly put him down as ‘a boundless and deeply important young star’.

At the heart of this recognition is Iyer’s wizardry on the piano and unique interpretation of jazz. “When you look at the history of jazz, everybody who made significant contributions through their music never really saw it as a ‘kind’ of music. Anybody who could shed that preconception of what jazz is—what it should or shouldn’t be—and just approach it as a human endeavour, I think, would find something to resonate with here,” he says in a YouTube clip that previews his latest album, Historicity.

One of the best-reviewed jazz albums of 2009, Historicity features the trio of pianist Iyer, bassist Stephan Crump and drummer Marcus Gilmore. When approached by German record label ACT to do a trio album, Iyer said they had to work quickly. So, rather than writing new material, which usually takes him a long time to develop, Iyer decided to try doing several renditions of other people’s music— “a strategy that is itself part of the jazz tradition,” he says.

While one glimpses jazz renditions of Bernstein’s Somewhere, Andrew Hill’s Smoke Stack and M.I.A’s Galang, among others, the music in the album, says Iyer,  was “left a lot to spontaneity and the chemistry of the moment. So we were able to surprise ourselves”.

The real inspiration, though, came from an understanding of the fact that everyone is really shaped by their past—their historicity—that we live in a historical context that informs everything we do. “History becomes something we can hear all around us, like music,” says Iyer.

Shaping his own future were the dreams of his parents, who have Tamil roots, who arrived in the US in 1964, mainly because of new opportunities. There was a wave of immigrants from India around then, because of a change in US law. “They were among that first major wave of immigrants—the pioneers, the ones who ‘discovered’ America,” says Iyer. While Iyer’s father got a PhD in pharmaceutical chemistry and worked for drug companies, his mother got an MBA and worked in corporate management.  But neither was musically inclined.

Born in Rochester, New York, Iyer started playing piano by ear when he was 5 or 6.  “I wasn’t really serious about it. It was my sister’s instrument, and I suspect that initially it was just my way of annoying her.”  He started taking (Western) violin lessons,  making that his first “official” instrument.  “At some point when I was little, my sister and I improvised on the piano together, and it was a revelatory experience—playing collectively in real time, feeling the instrument respond, building the sound together.  So maybe that day started it all.”

Along the way was a long list of inspirations, with jazz pianist and composer Thelonious Monk on top. The others, in no particular order, are John and Alice Coltrane, Duke Ellington, Andrew Hill, Jimi Hendrix, Nina Simone, Roscoe Mitchell and, of course, Julius Hemphill.

These days, he practises and listens to music as much as he can, also juggling the “interesting challenge” of giving more solo concerts and his job as a faculty member at the School of Improvisational Music at New York University. Plus, there are projects like a collaboration with poet Mike Ladd and young veterans of the US’ wars in Iraq and Afghanistan.  And Tirtha, a trio with Indian musicians, Carnatic guitarist-composer Prasanna and tabla player Nitin Mitta.

Iyer’s also booked to perform all over the world, sans India, till May 2010. It’s been more than a decade since he visited India, he says, and is waiting for the right opportunity to perform here. Anyone listening?