The Unending Trial of Asha Bhosle

…and how Fate couldn’t have chosen a sterner adversary 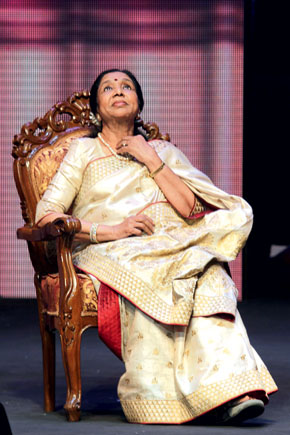 …and how Fate couldn’t have chosen a sterner adversary

That’s what Asha Bhosle told her friend, actress Poonam Dhillon, a few days after the singer’s daughter, Varsha, shot herself in her Peddar Road apartment in Mumbai on 8 October. Dhillon recalls she could hear in Bhosle’s voice “a mother speaking”. The next mo­ment, Asha collected herself, putting up a brave front. “But I must not be weak,” she reminded herself. “I shouldn’t cry in front of my grandchildren. I have to keep the flock together.”

For Bhosle, family always came first. Ironically, though, it is from family, an idea on which she built her entire life, that she received as much sorrow and grief as love and longing. It is equally ironic that for both Asha and her daugh­ter, marriage was not a smooth ride.

Varsha Bhosle, a columnist who wrote for several publications, said on one occasion that Asha Bhosle was not merely a mother but her “entire family”. Naturally, her Aai has been a subject of many of her articles. Hours after news of Varsha’s suicide began trending on social media, Rediff.com dug out of Gentleman magazine’s archives Varsha’s moving tribute to Asha Bhosle. Published in the magazine’s September 1993 issue, it is a must-read for anyone looking for an in­sight into the Bhosle-Mangeshkar clan. Varsha describes an early scene at the Bhosle household. Asha Bhosle, then a rising singer pregnant with her third child, walks out of her in-laws’ house after years of suffering. Refusing to be a victim, Asha Bhosle goes back to her mother’s place. Varsha writes that Asha Bhosle starts working ‘twice as hard since she has to rebuild from scratch, and there is one more mouth to feed’. Over the following decades, the sing­er tirelessly works towards making her own house, the story of which, if ever fictionalised, could be titled A House for Ms Bhosle. The consequence of being a working mother was that Asha Bhosle could never spare time for her growing kids, including Varsha.

‘I never had enough of her,’ rues Varsha. Once she asked her mother: “Aai, you had the security of your mother, your sisters—what was the big rush to set up your own house? Couldn’t you have giv­en us more time?” Asha Bhosle replied, “Never again did I want to be at the mer­cy of anyone else. It would have been equally harmful for you three. You had to grow up in your own home, and with the freedom I alone could sanction.”

Singer. Mother. Grandmother. Fighter. Survivor. Asha Bhosle, 79, is all that rolled into one. As senior journal­ist Ambarish Mishra, who has known her intimately for over two decades, says, “All of Ashatai is made of steel ex­cept her velvet vocal chords.” Mishra, a music aficionado, has followed Bhosle’s career like a devotee. As a correspondent for The Times of India, he has written about her on numerous occasions, relentlessly driving home the point that she has led a tough life. But here, he speaks in his personal capacity, having once land­ed the coveted opportunity to write a book on her. Unfortunately, the project didn’t materialise.

“She is a courageous woman who held life by the scruff of its neck and said, ‘Look, I am not going to let you mess around with me.’ She is at nobody’s mercy,” says Mishra. “She is a fiercely independent person and had often had to pay a price for that because as we all know, Indian society doesn’t like such independent people.”

In 2008, when the singer turned 75, Mishra’s report in The Times of India read, ‘Asha’s trek to stardom has been long and arduous. Hers was a double-decker di­lemma. When she debuted in Chunariya (under Hansraj Behl’s baton) in 1948, she found herself ranged against biggies such as Shamshad Begum, Rajkumari and Geeta Dutt.’

And: ‘On the other hand, Lata Mangeshkar (Asha Bhosle’s elder sister) loomed large on filmdom’s skyline.’

Growing up in the famous Mangeshkar family, which had its roots in Marathi theatre and music, Asha was hardly noticed among her four sib­lings. She has often mentioned how dif­ficult her childhood years were. Having lost their father, Dinanath Mangeshkar, early, the kids had to fend for themselves. When Asha was around 15, she eloped with her neighbour, Ganpatrao Bhosle, a ration inspector. This was against the wishes of her family, especially her moth­er. This chapter of her life marked the beginning of the first round of trouble. “Once Asha was married, her husband did not want her to have anything to do with us,” says Lata Mangeshkar in Lata Mangeshkar… In Her Own Voice, a book by Nasreen Munni Kabir. “She wasn’t al­lowed to see us or write to us. This was the situation for years. Ganpatrao Bhosle used to take Asha to various music direc­tors and make her audition for them. He believed that she would earn him lots of money and wanted to control her. Asha suffered a lot during those years.”

Traumatised, Bhosle left her husband in 1960. Before long, the single parent with three kids had come to grips with her failed marriage. By then, she was al­ready a well-known playback singer, be­coming composer OP Nayyar’s muse. She recorded some of her biggest triumphs under his nurturing gaze, including Naya Daur, Phagun, Howrah Bridge and Kashmir Ki Kali. Subsequently, she teamed up with RD Burman, whom she married in 1980, to produce an extraordi­nary body of work. The soundtracks of films like Teesri Manzil, Caravan, Yaadon Ki Baaraat, Ijaazat and Saagar are cult. Also among her great works is Umrao Jaan, where Khayyam tested her and brought out her best.

“By the 1960s, she had started singing for all the main leads,” says Ambarish Mishra. “She sang for Vyjayanthimala in Naya Daur, for Suchitra Sen in Bambai Ka Baboo and for Waheeda Rehman in Sahib Biwi Aur Ghulam.”

It was around this time that Bhosle would face another challenge of her ca­reer, the comparisons with elder sister Lata Mangeshkar. Some of this famous ri­valry was mirrored in Sai Paranjpye’s 1998 film Saaz. Mangeshkar was like a tree under which Bhosle couldn’t flour­ish, a shadow she couldn’t grow out of. The sisters live in the same building—Prabhu Kunj on Peddar Road. They are said to have their morning tea together and their doors are always open for each other. Yet, talk of their rivalry does not go away. There still are rumours, and even some books, suggesting Mangeshkar sti­fled Bhosle’s career using her clout. Bhosle herself said in an interview with Rajeev Masand on CNN-IBN: “Didi could have helped me but she didn’t. Probably, with her help I could have risen earlier than I did.”

Mangeshkar once told radio announc­er Ameen Sayani, “Asha’s husband was the reason she and I didn’t speak for some years. He used to instruct her not to talk to me during duets.”

Yet, by and large, the two have acted with grace in public. And there are some who find the rivalry theory exaggerated. Composer Shamir Tandon, who has col­laborated with both, says, “Ashatai took a different route from didi. Her style was different, her way of approaching things was different. The rivalry is media im­posed. They were never competing against each other.”

Mishra too doesn’t have patience for those who are judgmental about the sis­ters. “The business of portraying Latadidi as a villain doesn’t go down well with me,” he says. “I want to make it very clear; if somebody insists that didi is a villain in Ashatai’s life, then that person should have personally suffered her ‘villainy’. You haven’t suffered and so haven’t I. So let’s not talk about it. I don’t know why but there is a new tendency of pitting them against each other for comparison’s sake. Maybe it’s part of a larger gameplan of deconstructing Latadidi. But to say that didi has been overbearing on Ashatai is preposterous­—and it does disservice to their careers.”

In Mishra’s view, the disparity lies not in their style of singing but their person­alities. Their personalities even shape their music, believes Mishra. “Ashatai befriends anyone easily. She can break into a hearty guffaw. She has encouraged her kids to call her tai. Latadidi is the opposite. She is careful about her public image and that’s how she is. Their singing is an extension of who and what they are.”

Tandon offers an interesting perspec­tive: “Lata didi enjoys a goddess-like sta­tus. She is pious and you cannot ever touch her. Ashatai is human. That’s why people point out flaws in her, that’s why critics get away saying that she can only do racy numbers. She is prone to scruti­ny as much as any other artiste. She doesn’t take herself seriously, maybe that’s why she is taken for granted at times. She gives off vibes that she is one of us, not above criticism.”

One fundamental difference between the sisters is that while Mangeshkar has rarely taken risks with songs or their ren­dering, Bhosle has experimented. In her younger days, like Mohammed Rafi, she changed her style for the star who was to lip-sync it on screen.

“She was the first singer to use English words in Hindi songs, simple words like ‘love’ or ‘sorry.’ Those days songs were sung mostly in the classical style, with lyrics written in the Hindustani tradi­tion,” points out Tandon.

Tandon also singles out Bhosle’s I-can-do-it attitude. “Once, she had to sing a very high note. When I told her, ‘Tai, you used to touch the high key when you were young,’ she fumed, ‘I still can. I am a true Mangeshkar Maratha. I will do it.’ And she did it.” This spirit also helps her negotiate the traumas of her life.

Bhosle cooks to take her mind off her troubles. It is a stress-buster, a way of diverting her mind.  “She is a great cook and host,” says Poonam Dhillon. “She knows I like prawns and fish and always makes sure these are there on the dining table [when I visit]. Once, her son Anand said, ‘Every time [Dhillon] comes home you make the same thing. Can you change the menu for once?’”

Her five grandchildren are her other solace. “She drops them to school and to their karate and dance classes and cooks for them,” says Tandon. “And she cannot live without her saris and gajras like any typical Maharashtrian lady.” She is very close to her son Anand, her ‘conscience keeper’ in Mishra’s words.

Success has come to her at a cost and she values it, says Tandon. “She likes to keep the mood light. Laughter and hap­piness is her way of dealing with trage­dies. She will deal with this loss with as much grit and determination as she has the other setbacks in her life. She is an op­timist. She is asha, hope,” says Tandon.

Dhillon says Asha is not one to wallow in self-pity. “She doesn’t pretend life has been easy. All the hardships have only made her strong. They taught her to… live life to the fullest.”

Dhillon, a member of her close coterie, sees the tears behind the smiles, but Asha is not one to cry on somebody’s shoulder. Dhillon first met Asha as a teenager and has seen her in happier times with RD Burman, hanging out with them at their Santa Cruz terrace flat.

“She is like a soldier. She will continue to fight but she will never take anybody’s help. Her problems are her own and she prefers dealing with them herself.”