Something in him has changed. In place of the jovial boy is a dark brooding man. But Hrithik Roshan continues to see life as a beautiful journey. 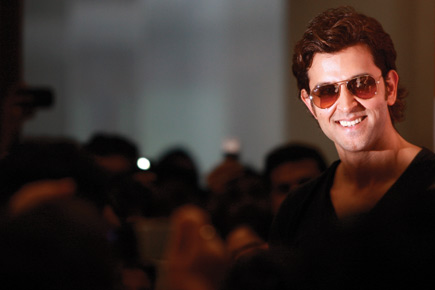 Something in him has changed. In place of the jovial boy is a dark brooding man. But Hrithik Roshan continues to see life as a beautiful journey.


He reached for it like a desperate man, clutching at straws. That was Hrithik Roshan’s reaction when he first heard the script of Kites. “I jumped at it, on my crutches,” he says. For five dark months in 2008, Hrithik grappled with crippling knee pain. On long, sleepless nights, the 36-year-old brooded over whether he should quit acting. “Science had given up on my knee. I was heartbroken. Kites pulled me up.”

Hrithik’s labour of love, Kites, released on 21 May to lukewarm reviews and mixed audiences. On public forums like Twitter and Facebook, viewers ranted against the film’s haphazard execution. On the Friday it opened, the star defended his film on Twitter, posting, ‘To all the people who didn’t like Kites n stated that with honesty n love—I’m PROUD to have u as my fans.’  Hrithik also sent ‘understanding’ to those who hated the movie with a vengeance.

The star was quoted saying that if he couldn’t “dance or jump around”, he didn’t want to be an actor. Surely there is more to acting than that? “Yes,” he says, “In fact, I’m playing a paralysed man in Guzaarish (directed by Sanjay Leela Bhansali). I don’t think you get the scope of my knee problem. I couldn’t get up from my chair without the help of my hands. How could I look like a fit, strong character? I would have had to compromise on the spirit of my roles, even my walk. I didn’t want to act if I didn’t have the spirit.”

Hrithik Roshan has always been passionate about acting. There have been no walk-on parts for the sake of friendship. After his first brush with stardom, he hasn’t signed films in a frenzy just to prove something to his audience. As a film journalist, you interview Shah Rukh Khan and Salman Khan perhaps twice a year. Akshay Kumar does five movies a year and that much pre-publicity. The last three Christmas seasons, there have been journalists at Aamir Khan’s door.

Hrithik, in comparison, has had nearly two-year gaps between his films (he has done only 15 in the lead role since Kaho Naa Pyaar Hai in 2000, and the figure would have been much smaller if it were not for the blitz that followed his extraordinary debut). Meanwhile, Ranbir Kapoor has caught on Hrithik’s heels. At the time of filing this story, Hrithik has about 224,000 followers on Twitter, somewhat modest by the standards of his contemporaries. And there are regular complaints that he does not tweet enough.

Is Hrithik a reluctant superstar? “Superstardom is a waste of time,” he says, “There’s no truth in that. When your ego fills up, your creativity is switched off. I follow my instincts and look at where it’s got me.”

In 2008, before the release of Jodhaa Akbar, when we met at his Juhu home, he wore a sunny attitude. He was just back from shooting a commercial in Goa. At the time of Krrish in 2006, he gamely joked about being a superhero while a grey Persian cat walked gingerly around us. This interview, though, is going to be different.

I’m ushered into a room with an overpowering painting of his wife Sussanne and him, his green eyes staring at you from the frame. ‘Baba’ has gone for a haircut, say his staff. Hrithik eventually walks in wearing a black T-shirt. The mood is somewhat sombre.

He has been a subject of intense speculations—an affair with Kites co-star Barbara Mori, Sussanne walking out on him, a fall-out with his father that caused him to leave home, wild partying, alcohol, drugs, his disapproval of his sister Sunaina’s remarrying. Didn’t it worry him, the damage such rumours could do to his image? After all, he perhaps has the largest fan base among children in the country. “In fact, this is the best lesson I could teach children—don’t react. Live with dignity. Don’t get provoked. After all, on a macro level, it’s things like these that cause wars.”

Hrithik says the drugs and partying allegations stuck to him because of the wild, dishevelled appearance he cultivated for Guzaarish. His hair was a crazy, unruly mop, his face hidden behind a beard. Does he miss that look? It’s a teasing question, looking for some humour in a guy who once sportingly showed a flash of his secret buzz cut (for Lakshya) from beneath a baseball cap. But this Hrithik is more serious, he doesn’t take the bait. “I miss every character. I feel lost that I may never meet that guy again. For seven months, I looked through the eyes of a dying man. Nothing matters. There’s so much pain and suffering; you have to spread love.”

Hrithik knows pain. His sister Sunaina fought a protracted battle with cancer and has said that her younger brother helped her pull through. His knee problem has persisted for a few years. “One day, the 20,000 remedies I’d tried converged on my knee. It’s like God felt I’d paid my price,” he says with a smile. Can he play with his kids now—four-year-old Hrehaan and two-year-old Hridhaan? “I have to warm up my knee; then I can play Spiderman. I have my hands full. Two boys can do a lot of damage. But they have such pure energy; they connect to the child in me.”

As a boy, Hrithik was extremely shy. There is an incident that his uncle and music composer Rajesh Roshan told a film magazine. Back in 1979, Amitabh Bachchan was in a studio to record the song Mere paas aao for the film Mr Natwarlal when his eyes fell on five-year-old Hrithik in the chorus. “What an angelic child,” Bachchan is said to have commented in his baritone, walking up to the boy. “I got so frightened, I ran all the way home,” says Hrithik grinning.

He had an uneven childhood. A film industry child, he attended birthday parties with Farhan Akhtar, Karan Johar and Uday Chopra, went to school in the same car as Abhishek Bachchan and stood in as Ranbir Kapoor’s babysitter. “Ranbir’s peed on me,” he had once told me, laughing, “Our parents went on holiday together and I used to carry him around. He used to cry a lot.”

But with his father’s patchy career, Hrithik also saw failure from very close. So he knows the value of striving. As a terribly shy child with a stammer, he practised his speech in front of a mirror. When he wanted to develop a physique, he took tips from Salman and worked hard on the goal. He assisted his dad on Karan Arjun and Koyla. It set the base for one of the most enduring friendships between any two A-list stars—Shah Rukh Khan and Hrithik. In a recent interview, Shah Rukh introspected over how he never felt as insecure as he did when Hrithik became a sensation with Kaho Naa Pyaar Hai. Hrithik says, “There was no reason for the insecurity. Shah Rukh was vulnerable then and people were rude and disrespectful to a man who had entertained us for ten years before I came on. Things didn’t change inside me. I couldn’t stop liking my best friend. Now we can laugh about that.”

With Kites, he believes he is poised for a turn in his career, ready for big risks. The film’s US version has been edited by director Brett Ratner (Rush Hour series, X-Men: The Last Stand). There is Hollywood buzz around Hrithik after reviews like that of The New York Times film critic Jeannette Catsoulis, who wrote, ‘Mr. Roshan requires viewing uncut: writhing on the dance floor or just gazing into space, the man was made to drive women crazy, one movie at a time.’ Back home, as Rakesh Roshan works on the sequel to Krrish, Hrithik is shooting Zoya Akhtar’s road movie Zindagi Milegi Na Dobara with Farhan and Abhay Deol, and he has Guzaarish lined up for release later this year. Also, he is a prospect in Shekhar Kapur’s futuristic water politics story Paani. “I was supposed to be launched by Shekhar 12 years ago in Ta Ra Rum Pum with Preity (Zinta),” he says. Last year, Hrithik made the unusual choice of playing the role of the narcissistic, opportunistic star Zaffar Khan in Luck By Chance. “People asked me why I wanted to do this negative character. I’m an actor. You have to be negative sometimes,” he says.

The actor describes himself as naïve, a dreamer. A man whom fame cannot change. “I hear the roars and shrieks when I go on stage to perform, but I can’t fill my ego up with that. I see it as a pat on my back and I move on.”