These are the the brilliant craftsmen our maestros swear by 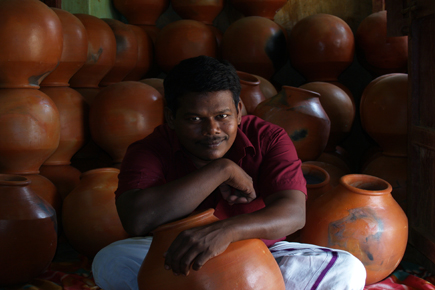 A paean to the brilliant craftsmen our musical maestros swear by


You need to navigate your way through sitars of all shapes and sizes at Rikhi Ram and Sons, located in the heart of Delhi’s bustling Shaheed Bhagat Singh Market. As one waits patiently in what seems like a maze of musical orchestration (sans sound, that is), one can’t help but notice the umpteen pictures of the Beatles, Pandit Ravi Shankar, Pandit Jasraj, Rajan Sajan Mishra and others adorning the walls. The common factor in each picture is the presence of  the shop’s owners, the late Pandit Rikhi Ram and his son Bishan Dass, completely at ease in the company of all these maestros.

“My grandfather Pandit Rikhi Ram had first founded the shop in 1920 in the Anarkali Bazaar of Lahore. However, after Partition, he shifted to Delhi and set up shop here,” says Sanjay Sharma, who now manages the store.

The Sharmas bear an intimate relationship with the families of Pandit Ravi Shankar and Shiv Kumar Sharma, the world’s leading exponents of the sitar and santoor, respectively, that goes back nearly a hundred years. When Sanjay first asked Pandit Ravi Shankar about his first meeting with his grandfather, this is what the sitar maestro had to say: “I was playing at a concert when I suddenly saw this tall man in a kurti. He came up to me and did pranaam. Although he used to interact regularly with the likes of Bade Ghulam Ali Sahab and Onkar Nath, he introduced himself so humbly.”

With such greats of classical music as regular visitors, it is little wonder that Sanjay found the inspiration to learn music as well. “I think I got my tools perhaps when I started walking,” chuckles this 40-year-old.

What sets Sanjay apart from the rest in this trade is his irrepressible urge to push boundaries and experiment with materials. He is credited with the invention of the studio sitar that he made for Pandit Ravi Shankar. “Two years back, Panditji suffered from double pneumonia and became very weak,” he recounts, “Hence I wanted to make a sitar that wouldn’t stress him out.” The result was a shorter, 40 inches long sitar that could be played on a raised platform.

In a sure sign that the bond will endure, Sanjay is now working with Pandit Shiv Kumar Sharma’s son, Rahul, to develop innovative versions of the santoor and thus have strings tugged anew. “After all,” he says, “we have to make lives of musicians easier.”

As you walk past the giggling school children and scores of cows that stand vigil at the entrance of Sohan Ganj, Ram Gali in North Delhi, you can hear the faint strains of the flute emanating from a house in the middle of the alley. A climb to the first floor brings one face-to-face with Harsh Wardhan, acclaimed flutist and creator of the bansuri for Pandit Hariprasad Chaurasia, the world’s top exponent of this wind instrument.

Making flutes for Pandit Chaurasia has been one of the biggest thrills of Harsh Wardhan’s career, and it shows in his enthusiasm. “I first met him at a concert in 1973.  He showed me his flute and I told him candidly that it was out of tune. He was really impressed when I tuned it properly,” remembers Harsh Wardhan. Since then, the maestro has only been using flutes created by this master craftsman.

As one browses through the photographs of Harsh Wardhan with Pandit Chaurasia, one can see the easy camaraderie reflected in their demeanour. Even so, the relationship is closer than you would think. “My daughter is married into his family,” says the master craftsman by way of elaboration, “In one of these pictures, you can see my granddaughter playing in his lap. We are one big loving unit.”

Harsh Wardhan is truly a man of many talents. It is not just north Indian bansuris that resonate pleasantly under his touch, his expert supervision makes Carnatic flutes hit the perfect notes as well. He recently crafted an 8-hole flute for Shashank Subramaniam, the musical prodigy who shot to fame at the young age of 12 with a stunning flute performance at the prestigious Music Academy in Chennai.

That’s not all. Few people know it, but Harsh Wardhan’s flutes have also been used in the Oscar award-winning film Slumdog Millionaire. Naveen Kumar, who plays the flute in the Oscar-awarded music director AR Rahman’s troupe regularly, buys his instruments from him. And Harsh Wardhan’s contribution has not gone unnoticed through all the celebratory clatter. He shows a touching SMS that Naveen Kumar had sent soon after the film won its  Golden Globe award: ‘Harshji, your flutes are very nice. Thank you and god bless you.’

His flutes are as extraordinary as the music they produce. But what  makes them different? “Flute toh har gali mein mil jaata hai (flutes are available in every alley). But those who don’t play the flute can never make it properly.”

Hemen & Company has become a landmark of sorts on Rash Behari Avenue in south Kolkata. The shop, which is famous for its sarods, was first established by the late Hemendra Chandra Sen a couple of months after Indian Independence. “My father was a music enthusiast and had learnt sitar under the tutelage of the great Ustad Alauddin Khan. But he lost everything during the Partition. When he migrated from Comilla, now in Bangladesh, he opened this shop,” says Hemendra’s son Ratan Sen, who now manages the business.

As the shop’s fame grew, top-notch classical musicians like Ali Akbar Khan, Ustad Amjad Ali Khan, Pandit Bhimsen Joshi and Nikhil Banerjee came to trust Hemen & Co for its splendid instruments. And the Sens did all it took to justify the esteem in which their craftsmanship was held. That required an instinctive and intimate grasp of classical music, its special nuances, its reach for perfection, and also anything beyond which was permissible within the broad structure of the superlative as far as instrumental performances went. So, Ratan followed his father and picked up the finer aspects of musical performances from the maestros directly.

He believes that it is this special knowledge of the sarod and sitar that distinguishes his craftsmanship from that of other instrument makers. “There is a lot of research involved,” he explains, “and even today, I constantly try to upgrade and improve the instruments that are made here.”

The materials used at Hemen & Co are different from the rest, and this adds a unique touch to each instrument. For instance, the wood that is used is very old and weathered—about 100 to 150 years old. Ratan has to expend considerable energy on scouting around for such wood, which becomes available only on occasions that old mansions are knocked down. The instruments he makes are fashioned out of vintage door and window frames or shutters, even cupboards. “Old wood gives an entirely different character to musical instruments. Old wood is priceless,” he says.

While visits by maestros are a fairly regular affair at the shop, what stands out in Ratan’s memory is the visit by George Harrison in 1986. “He was a very jovial and down-to-earth person. The road in front was blocked by a sea of humans. The police had a tough time controlling the crowds,” he remembers, with a laugh. Ratan’s son, Shunamrjit, now keeps the family tradition alive. “He’s learning the sarod and is very good at it,” says Ratan with evident pride.

Once you reach Tollygunj in south Kolkata, you don’t need to ask where the Rhythm Tabla Shop is located. All one needs to do is follow the steady stream of foreigners down the narrow alley to a three-storied building where the shop is housed. At the ground floor, you are greeted by an unassuming gentleman who introduces himself as Mukta Das, owner of the shop.

Though Mukta harbours utmost respect for them all, his favourite remains Ustad Zakir Hussain. The foundation of this beautiful relationship was first set in 1995, when the famed exponent of the tabla came to perform at the Sangeet Research Academy in Kolkata. Pandit Samir Saha of the academy had been extremely impressed with Mukta’s work and asked Ustad Zakir Hussain if he would like to play with the new tabla-bayan set crafted by Mukta. “Why not? They are excellent,” came the reply. From then on, Mukta has been making tablas on a regular basis for his favourite client.

Tabla-making is deeply entwined in Mukta’s DNA. It has been his family business for longer than you’d imagine. He traces his lineage to 10 generations of tabla makers who used to practice this craft in the bustling town of Ranaghat, about three hours away from Kolkata.

At the tender age of ten, Mukta was taken under the wing of the renowned tabla maker Narayan Das. After having been trained in the nuances of the craft, Mukta finally opened his own shop in Behala, Kolkata in 1997.

So what is it that makes Mukta Das’ tablas so special? “Maybe I understand the needs of each tabla player better than others,” he says. The use of unique materials adds to the mystique; he uses the hide of goats sacrificed at the Kali temple at Kalighat. “I can’t divulge the rest, as they are trade secrets,” grins Mukta.

This is one bond that has transcended generations. It all started when Chennai-based percussionist TR Harihara Sharma went searching for a potter who could innovate on the existing ghatam. This quest landed him in the small town of Manamadurai in Sivaganga district of Tamil Nadu. Sharma’s search ended at potter Ulaka Velalar’s house. Not only were the potter and his son Vellaichamy blessed with exceptional skills, they also had a thorough knowledge of Carnatic music. This endearing relationship was taken to another level when Sharma’s son, Thetakudi Harihara Vinayakram, popularly called Vikku Vinayakram, emerged as a child prodigy in Carnatic music. When Vellaichamy passed away, the mantle passed on to his son Kesavan and grandson UVK Ramesh.

Vikku Maharaj’s global success has brought Ramesh a deep sense of satisfaction. “In the past, the ghatam was just an accompaniment in Carnatic music. It was Vikku who made it an independent musical form,” he points out. Today, Ramesh is a busy man, making ghatams for as many as 150 musicians, including MS Karthik, Subrahmanyam and Vaikkom Gopala Krishnan. The saga of the generations continues as Vikku Maharaj’s son, Umashankar, too buys his musical instruments from him.

Ramesh feels blessed to have been born in Manamadurai as the clay available here makes the perfect ghatam. “There are four different types of clay available here. Each variety of clay gets its representation in each pot, and that ensures the creation of different sounds from different parts of the instrument. The process is a Herculean task that lasts for a week,’’ he says.

Though he is glad for the global recognition of the instrument, he feels sad that his own countrymen do not accord it quite the same respect. “Ghatam makers need protection, promotion and patronage. We have a cooperative here, and I hope the government would at least empower this body to help with the finances and basic infrastructure.”