A group of lawyers pays tribute to the thousands of mothers in India who suffer untold pain and humiliation at childbirth, even death at times. 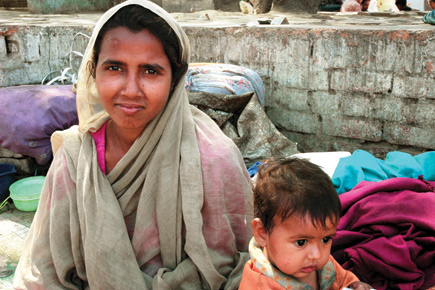 A group of lawyers pays tribute to the thousands of mothers in India who suffer untold pain and humiliation at childbirth, even death at times.


For the young lawyers of the Human Rights Law Network (HRLN), a Friday evening opening at the beautiful Galerie Romain Rolland at New Delhi’s Alliance Francaise far exceeded their expectations. It was their debut photo exhibition. HRLN founder and one of India’s leading human rights lawyers, Colin Gonsalves, admitted this was his first time introducing one. That a fairly big crowd showed up made his day. Reality, we know, is hard to sell in India. Fantasy has a readier market. So when a gallery puts up damning snapshots of how India treats its mothers-to-be, for hundreds of thousands of whom pregnancy is as good as a death warrant, expecting a big audience is ambitious.

The week-long exhibition, titled Mera Haq, is a testimony told in 20 frames of survival, of precious lives lost, of a government with blood on its hands. Shot by young lawyers and social activists fighting to raise citizen voices and make them count in India’s courtrooms, the photographs capture stories from remote villages in Central India to the slums of New Delhi. And to keep the focus firmly on the photographs, the exhibition makes no mention of the photographers.

When HRLN’s Marta Kasztelan met Anchara for the first time, in Faridabad, she was only a few hours old. She was born two months premature. Her mother, Shanti Devi, didn’t  make it through the delivery. Anchara’s photograph taken on that day—of her cradled by her 11-year-old brother, Deepak, who only hours earlier had lost his mother, is the opening image of the exhibition. It is exceptional for the multiple tragedies it captures even as it declares a miracle birth. The tragedy is, Shanti Devi’s story in anything but exceptional in India. Consider this: 117,ooo women die of pregnancy-related issues in India every year. A scandalous body count, faceless and without a voice.

Calling it a “tribute to the forgotten people”, Jameen Kaur, who heads the Reproductive Rights unit at HRLN, said she hoped the photographs would find space in homes and work places.

Perhaps, if we look at them again and again, we might just see.