For all their posturing and weighty pretences, the Indian elite’s life of letters is still strangely beholden to the British 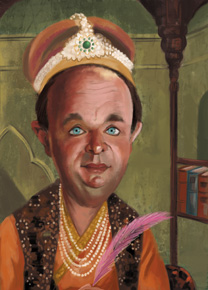 For all their posturing and weighty pretences, the Indian elite’s life of letters is still strangely beholden to the British


In February 1934, the young Claude Levi-Strauss took a ship from Marseilles to Santos. At the end of the journey, a journey mirroring so many made over the past 400 years from the First World to the Third, he arrived at an observation that seems obvious only once it is stated: ‘Travel is usually thought of as displacement in space. This is an inadequate conception. A journey occurs simultaneously in space, in time and in the social hierarchy.’

The British travelling to pre-Independence India were an extreme example. Younger sons with limited means of getting ahead in the UK, would land up in India and presume to lord over hundreds or thousands of Indians. The relation between the two countries has changed dramatically since, but the effects of journey remain.

There is still a vast expat community that enjoys some of the benefits of such travel from the West to India. In many professions, the journey does not offer much—a doctor or an engineer from the West would not overawe his counterpart here—but there remain professions where the advantages are enormous, especially those related to the written word, a reflection of the fact that English mediates our own social hierarchy.

This is most notably so in the case of a foreign correspondent. What would be a reasonable salary in London is outrageous in Delhi. A residence in Golf Links or a farmhouse in Mehrauli is perhaps not the best beginning to an Indian sojourn, especially when you add to this a lack of knowledge of a local language and easy access to the people who frequent the Niira Radia tapes, but it has its comforts.

The money, important as it is, is not the only factor determining the journey up the social hierarchy. Not all foreign correspondents are equal; there is a hierarchy even among them, which has much to do with our perception of the world. The importance of their country of origin is only one factor, a factor that would explain why those from the US matter but does nothing to explain the pre-eminence of British journalists long after their country has ceased to matter globally.

They remain inheritors of a Raj that still lingers. It even allows some of them to cap their tenure with an India book. Who else would have the temerity to sum up a continent after a two- or three-year stay confined mostly to Delhi? The problem with such books is that long before they have been written, the Levi-Strauss effect has already undone the reasonably intelligent, mid-level journalist who first landed in India (these are generalisations, but it feels good to be dishing them out rather than be subjected to them).

Despite such obvious drawbacks, the success of the genre abroad is easily explained; such a book is first read and reviewed abroad by a group of peers, who if they have seen India (China or Africa), have indeed seen the foreign correspondent’s India (China or Africa) and so only end up applauding a reflection of their own vision. The reviews become a testament to the virtues of the book in the minds of readers who have never seen India.

The real question then is not why the genre exists abroad, but why we value it here. Recently, after the Radia tapes, I found myself at a book launch facing a rather sceptical British journalist, who argued the BBC would never have tolerated such behaviour but this is India after all and here we should excuse far more. In the course of the conversation, it occurred to me that this was the first book launch in Delhi where I did not have to scrounge for food; the waiters were constantly hanging around.

They were only reflecting a perception of the White man they hold in common with our critics and publishers. Our ability to fawn extends well beyond the foreign correspondent. Our publishers need the stamp of British approval. All you need to do is compare the advances paid out to books submitted locally with books that first got accepted in the UK. Or, for that matter, look what happens to sales of a book after it wins the Booker; somehow, the Pulitzer counts for nothing.

This constant need for British approval allows writers from the UK to produce and sell books that should be junked in India. In the course of this year, we in India were subjected to an overdose of publicity for Jad Adams’ book on Gandhi, The Naked Ambition. This insightful writer has suggested, ‘When Gandhi was tormented by sexual thoughts, perhaps his impacted colon was pressing on his prostate gland and stimulating him sexually. This would explain why some diets, by reducing his constipation, would help him feel less sexual.’ Here is constipation as a prompt for priapism. Why instead did the world wait another 60 years for Viagra? Why was this so fascinating to us that we had to give space to reviews of the book?

Earlier in 2010, we had a visitor from Britain at a literary festival in Jaipur. Geoff Dyer in 2009 had written a book called Jeff in Venice, Death in Varanasi, which many reviewers in India found deeply insightful. I wonder if they read the same book that I did, for these same reviewers thought nothing of Elizabeth Gilbert’s Eat, Pray, Love, which inflicted much the same trauma on India. But then, Geoff Dyer is a ‘serious British author’, so he can treat us to the fictional version of the foreign correspondent’s India. The traffic in Varanasi is described in detail, as are the cows and the ghats and the deliverance Varanasi provides.

I did wonder what prompted Dyer’s invitation to Jaipur in the first place, and in considering the answer, I could only think of the organisers of the festival. Click on the festival website and the first name that comes up is William Dalrymple: ‘the author of seven acclaimed works of history and travel, including The City of Djinns, which won the Young British Writer of the Year Prize and the Thomas Cook Travel Book Award; the bestselling From the Holy Mountain; White Mughals, which won Britain’s most prestigious history prize, the Wolfson, and The Last Mughal, which won the Duff Cooper Memorial Prize. He divides his time between New Delhi and London, and is a contributor to The New York Review of Books, The New Yorker, The New Statesman and The Guardian. He published Nine Lives: In Search of the Sacred in Modern India to great acclaim in October 2009, and the book went straight to the top of the Indian bestseller list. He is a director of the DSC Jaipur Literature Festival.’

I have been told that Dalrymple is a personable man, and in my own encounters with him I have indeed found him so, but what is of interest in this context is not Dalrymple the man, but Dalrymple the phenomenon. How did a White man, young, irreverent and likeable in his first and by far most readable India book, The City of Djinns, become the pompous arbiter of literary merit in India?

I think the answer lies in the description cited above. This director of an Indian literary festival does not consider it important to mention an Indian prize he may have received or an Indian publication he may have written for. His eyes are trained on the recognition that Britain’s literary world offers (even if there is the hint that commercial success in India has started mattering), and in that recognition lies his strength.

If Jaipur matters as a festival, it is because of the writers from Britain it attracts. When I talked this piece over with a top publisher at one of India’s leading publishing houses, the person, seeking anonymity ‘to protect the interests of the authors at the publishing house’ said: “Indian publishers and writers are peripheral to the enterprise. The list of authors that I send year after year is casually ignored—and that, I believe, is the case with most Indian publishers.”

Indeed, the authors who made Jaipur a celebrity event are men like Ian McEwan. In our literary culture, obsessed with Britain, a great writer from Europe can visit Delhi and fail to find mention on what pass for the literary pages of our magazines and newspapers, but a man like McEwan would be fawned over. Because a McEwan attracts attention, the festival does too, and as a result the same Indian authors who are peripheral to the enterprise seek its endorsement.

A recent newspaper report quoted Sanjoy K Roy, managing director, Teamwork Productions, organiser of the Jaipur Literary Festival, as saying: “After the success of the Jaipur Literary Festival, we wanted to do something down South. Kerala has so much green to sell to an international audience. It will be a beautiful location, on a hilltop. In Jaipur, we have seen the palaces and romance, in Kerala, there will be the beaches and Ayurveda.” This is literary tourism, with Dalrymple nothing more than the principal tour guide for writers arriving in India.

With no other means of arriving at literary excellence, we have mistaken the guide for the real thing. It is not for nothing that over the recent past, Dalrymple has been in conversation with authors as diverse as Tishani Doshi (though a romance linking Wales and Gujarat is perhaps a fit setting for him) and Sonia Faleiro (what could Dalrymple have to contribute to the Bar Girls of Bombay?; on the evidence of the evening, not much). Symbols matter, and if Dalrymple appears central to our literary culture, it says something far more damaging about us than about him.