They say this quaint little town by the Cauvery bears a curse upon it. Every year, tonnes of sand would blow in and bury the exquisite temples of the region. Exploring the myth behind the phenomenon 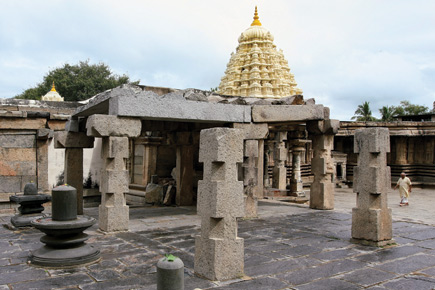 They say this quaint little town by the Cauvery bears a curse upon it. Exploring the myth behind the phenomenon


The sands of Talkad throw up a fascinating history, replete with a curse that the erstwhile Mysore royal family acknowledges even today. The story of how several metres of sand came to be deposited here, burying the town’s exquisite temples dating back to AD 350, is an enthralling mix of history, mythology and geology. And this week, this sleepy little town on the banks of the Cauvery will come alive, with nearly a million devotees expected to throng its excavated temples to ward off a curse that befell the region and its rulers.

Legend has it that a woman, pursued by the Mysore Maharaja’s army, cursed that the bustling town of Talkad would be covered by sand and destroyed and that the royal family of Mysore would go abegging for heirs. And to ward off the ill-effects of the curse, devotees from Karnataka, Tamil Nadu and Kerala perform the Panchalinga darshan once every four to 14 years, to appease the five forms of Lord Shiva.

Mahalinga Swamy, a priest at one of the main temples, says the date for this darshan is arrived at by a complex calculation. “The first day should fall on a new moon day in the Hindu Kartika month. It should be a Monday and the sun sign should be Scorpio. Such a combination occurs every four to 14 years. The last darshan was in 2006 and the previous one in 1993. We are lucky to have it twice in such a short span in this century. The darshan begins on 16 November and goes on till the third week of the month,’’ he says.

Talkad,  which is 185 km from Bangalore, has a rich history dating back to 350 AD. It has several temples with architecture from different periods, beginning with the Gangas who ruled from 350-1050 AD. They  were overthrown by the Cholas in the 11th century. In the 12th century, the Hoysalas captured it. It was later ruled by Vijayanagar kings and the Mysore maharajas. The Chalukyas and Rashtrakutas have also left their stamp on the local temple architecture. The town has as many as 30 temples buried under tonnes of sand. Over the years, the state government and the Archaeological Survey of India (ASI) have constructed retaining walls to prevent sand from covering the temples.

“Of course, there is at least three to five feet of sand that we have to take out. But this is minuscule compared to the previous years when there was at least 30 feet of sand that had to be removed and temples excavated. After every darshan, we would see within months, sand particles blowing in and burying the temples,’’ says an official supervising operations.

But the question is: how did the temples get buried under nearly 20-30 metres of sand? It’s something that excites scientists as much as it does rationalists, keen to prove the curse  theory wrong.

This is what folklore says. During the reign of the Vijaynagar kings, the governor of Srirangapatna, Sri Rangaraya, came down with a mysterious illness and was advised to offer prayers to Lord Vaideshwara at Talkad. In his absence, his wife Alamelamma, was in charge. When the condition of her husband deteriorated, she decided to visit him at Talkad. Meanwhile, Raja Wodeyar, the then Mysore maharaja, received complaints that she had been hoarding temple jewellery, including a nose ornament that had caught his fancy. He asked her to hand it over. When she refused, an infuriated Wodeyar declared war and reached the banks of Talkad. Seeing him, Alamelamma, crossed over to village Maalangi on the other bank, threw all her jewels in the river, and jumped in after cursing him thus:

Roughly translated from Kannada, it means: “May Talkad turn into a barren expanse / May Maalangi turn into an unfathomable whirlpool / May the Mysore Maharajas not have children for all time to eternity.”

The curse dates back to 1610. Sand has enveloped the temples here ever since and the Mysore royal family has acknowledged that they have been victims of the curse for 20 generations. The village too has been eroded due to the constant shifting of the river. “It is popular belief that praying here keeps the curse in check,’’ says educationist Panduranga Shetty and his group of elderly visitors as they trudge up the sand dunes barefeet for a sneak preview of the darshan.

Panchalinga darshan is the ritual of visiting the five Shiva lingas. The five temples where devotees worship these are Sri Vaideshwara, Sri Pathaleshwara, Sri Maruleshwara, Sri Arakeshwara and Sri Mallikarjuneshwara.

KN Ganeshaiah, who has studied the phenomenon, says the curse defies logic and argues that the Talkad phenomenon represents an ecological disaster. While doing a study for the school of ecology and conservation at Bangalore-based University of Agriculture Sciences, Ganeshaiah concluded that the three syndromes of the curse were already visible during that period and the curse had been intelligently moulded by someone with a vested interest. Symptoms of an ecological disaster were already noticed in the early 1600s and used to peddle the myth.

There is historical evidence since the late 18th century that every year, eight to 10 feet of sand has been accumulating in Talkad, forcing its residents to move northwards. In the early 19th century, Sir M Visvesvaraya, a celebrated engineer who later served as the dewan of Mysore, planted eucalyptus saplings to arrest the spread of sand. Though it did help, in the 1980s the state government and the ASI decided to construct retaining walls around all the temples that were excavated. The town has over 30 temples under the dunes and is an archaeologists’ delight. The ASI has recently completed the excavation of the huge Keerti Narayana temple complex which was under metres of sand.

There are other explanations, too. The eastward flowing Cauvery takes an unusually sharp turn at Talkad, one reason for the vast quantity of sand washing up on the banks. It is further carried by wind even as the seasonal floods push the sand dunes inland. In the past too, the river has shifted course for several kilometres in the local area around Talkad.

Then, there’s the earthquake factor. “The temples sank due to an earthquake fault that passes this point. Sinking of the ground led to floodwaters depositing loads of sand and clay. Even now, the region continues to register tectonic movement and quakes of small and moderate magnitude,’’ says KS Valdiya of the Jawaharlal Nehru Centre for Advanced Scientific Research, Bangalore.

Importantly, Ganeshaiah says, geographical upheavals have been occurring for millennia, while sandification is a few hundred years old. It was triggered by development work, when in 1336, Madhav Mantri, a Vijayanagar governor, dammed the Cauvery and built a water channel.

As for the curse of the Mysore royal family, despite most kings having a dozen or so wives, no rightful heirs were born. When they were, they died before marriage. Ten of the 19 rulers were forced to adopt children. But male heirs eluded even the adopted princes as the adoptions were genetically close, leading to consanguineous marriages and inbreeding. This caused homozygotic depression, says the scientist.

So, is the curse a myth? At least the devout don’t think so, as they cling on to the belief and head for the dunes. And they point to an event as recent as last month, when the current descendent, Srikanta Dutta Narasimharaja  Wodeyar, dropped enough hints that he was contemplating the adoption of a son.