The Last Days of Freedom 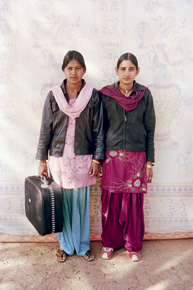 
I have photographed in rural Rajasthan since 1999, in villages and homes, among families who have treated me as their own. Although I chose to work independently, over the years I developed a friendship with various non-governmental organisations, including Urmul Setu Sansthan in Lunkaransar.

They have a bare bones campus at the edge of a busy National Highway: simple white blocks laid out in sandy soil that contain offices, homes for the staff, a communal dining hall, a weaving and dyeing workshop, various halls that house temporary schools and community meetings, and a small guest house that I knew I could stay in whenever I was passing through, where I was asked to pay only whatever I could afford at the time. The stark setting placed into relief the various individuals inhabiting the campus, drawn there either by a larger motivation or personal circumstance. The overarching utopian idea at Urmul remained gram sewa—service of the village.

As part of their various programmes, Urmul would organise balika shivirs—or study camps for girls—where in the course of six months, girls who had never attended school would be brought up to the level of a class five student. Somewhat related to the shivirs, every few years they also organised a balika mela—a fair for girls—attended by about 1,500 adolescent girls from about a hundred odd villages spread across Lunkaransar, Chhattargarh, Churu, Nagaur and Ganganagar in Rajasthan.

I decided to set up a photo stall for anyone to come in, have a portrait taken, and later receive a silver gelatin print of it. The stall was in a tent. We had a few basic props and backdrops that were sourced from a local photo studio and cloth shop on a very limited budget: lengths of white, grey and black cloth stitched together, a bench, a stool, two chairs, a bowl of plastic flowers with an ornate stand, a mirror and comb for those who wished to look at themselves before being photographed. Later, the girls themselves brought in many of the more interesting props such as a paper peacock, a magazine and hats made of old newspapers. The light was the broad, even light of a desert sky filtered through the cloth roof of the tent. It was all fairly minimal, and since it can get windy out in a maidan in the desert, everything kept getting blown around or periodically struck down.

Girls came in and decided how and with whom they would like to be photographed—best friends, new friends, sisters, the odd younger brother who had tagged along, teachers, the whole class, the local girl scouts, even a few grandmothers. First they would come by and look, so we often had an audience of onlookers prompting and commenting. Then, one girl would usually propose to her friend, or group of friends, that they get their picture taken too. After a little khus phus or whispered confabulation, someone would come forward boldly to put down names on the list. We would start to discuss where and how the picture would be taken: which backdrop, what props to use, if any. The whole scene was co-directed by me and those in the picture, as well as everyone around us—the girls would try out a few ideas, others would throw out suggestions, wisecracks and jokes, we’d all collapse with laughter, I’d yell at everyone to get serious, then suddenly someone would come up with an ingenious idea. No one asked why someone might wish to be photographed a certain way. I did not ask why the girls wished to pose three in a row blessing their audience, or wearing paper hats like crowns.

In 2010, after a fairly long gap, a balika mela was held once more. This one was smaller in scale. I was invited to participate again. I decided to exhibit the earlier balika mela pictures in a tent at the fair. Many of the girls who wandered in were surprised to recognise themselves and their friends. Most were married now, some were mothers, others were teachers, or in college studying nursing or midwifery, or (more rarely) commerce or mathematics in the hope of becoming a patwari.

And though I hadn’t planned to, upon popular demand, I made more portraits, this time in colour. While the earlier pictures had perhaps been more about relationships and mysterious, improvised gestures, constituting a small theatre of the vernacular—possible references including those drawn from religious calendars, Bollywood posters or local photo studios—the later colour portraits became more about the idiosyncratic fashion on display. In our cities, as elsewhere, everything is increasingly branded and starting to look fairly homogenous. Here, however, I found hearts stitched onto shirts, leather jackets over traditional salwar kameezes, fiercely knotted scarves instead of dupattas, handknitted sweaters and hand-embroidered jeans.

Unexpectedly, this unique sense of self, and the desire to express it through an imaginative fashion sensibility, exists in the adult context. Rajasthan is well known for its feudal and patriarchal past—and present. Every morning when I opened the local Hindi newspapers, I would find some sort of news item about a woman jumping into a tank, falling into a well, slipping into a water reservoir, or being found dead after drinking poison or hanging herself off the local khejri tree. Other times, it was a cooking accident involving kerosene. The deaths were usually labelled ‘accidents’, often remaining uninvestigated and unsolved. Frequently, the woman in question would be described as ‘mentally’ unsound. One year, when I went to visit a friend with cerebral malaria who was being treated at a government hospital in Barmer, I met a girl with over 80 per cent burns. Her name was Looni. She told me her in-laws had set her on fire, but she could not bear testimony against them because her father-in-law was a constable, and she was scared that if she died her husband and influential in-laws would then neglect her children. She did manage to get to a larger, better-equipped hospital in Jodhpur for further treatment, but she died there. Later, when I spoke to the world-weary supervisor of the burns ward at the Barmer hospital, he showed me pages from his register. There was a steady stream of women coming in every month.

Over the following years, I revisited the hospital and other public health sub-centres; I attempted to follow particular cases, met the police regarding individual cases and discussed what I found with local activists. I also realised how complicated each case was, particularly in a place where there is such a pervasive sense of fear, and where there are real reasons not to speak out publicly. Even today, the flow of alarming reports continues unabated, particularly in the vernacular press. The girls mentioned in the stories are usually married, and that is seen as their defining identity. I wondered if the balika melas were so popular because they offered a few days of fun in the last years of relative freedom, before the girls got married and moved to their husbands’ and in-laws’ homes…

The girls who come to the fair have an urge to know [of the outside world]. Those who stepped into my photo tent also wished to portray themselves as they are, or as they see themselves, or to invent new selves for the camera. Their attempts may have been tentative or bold, but this book may be seen as a catalogue of that desire.

I think of Urma and Halima, two girls who belong to the nomadic Jogi community, one that has few rights, that survives precariously on the fringes of villages and small towns and may almost be said to exist outside society as we know it, without access to land, regular employment, schools, healthcare or recourse to law. Urma and Halima came into the tent and sat down very straight on the white plastic chair and the black metal stool, flanking the plastic flower arrangement on its gleaming stand. They looked at the camera with poise and confidence, not unlike the Maharanis of a hundred years ago. This book is for them.

Ballika Mela by Gauri Gill, published by Edition Patrick Frey, will be released in Delhi in September 2012. With 72 black-and-white plates and 32 colour reproductions, essays by Gill herself and Manju Saran (in English and Hindi), the book is a record of Gill’s photo studio set up to take portraits of the predominantly female adolescents who attended the fair in remote and rural western Rajasthan