The Interpretation of Tweets

What the Twitter feeds of Bollywood personalities say about them 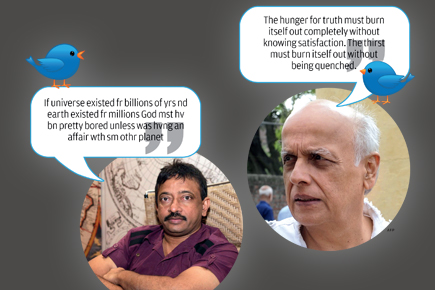 What the Twitter feeds of Bollywood personalities say about them


There are three people in every Bollywood person—the star as he actually is, the star as he thinks he is, and the star as he wants you to think he is. These three selves could overlap but it is also possible that they exist independently. For example, one of your correspondent’s rare interactions with a film star was a 20-minute interview with John Abraham at a Juhu hotel. It was peppered with bytes of John talking about John as John, with him mouthing lines like “John’s fans know…”, “John’s critics are…”, “They wonder why John does not do this…” Every time the first pronoun ‘I’ cried out for release, John swatted it aside with a John, and you frantically looked around to see if there was a John hiding behind the curtain.

In a Bollywood personality, image and reality are conjoined, but you can still get an insight into what lies behind the projection through a perusal of his words—for which Twitter is a readymade tool. This is true only for Twitter handles which the star operates himself. If he has outsourced it to a normal human being, all you will get are updates on being stuck in traffic or irrelevant promotions of insipid movies.

That disclaimer done, let’s begin with a filmmaker who likes to project himself as abnormal but from whose tweets you can gather the exact opposite. Many of Ram Gopal Varma’s tweets go like this:

It is every man’s right to be an iconoclast and announce it. But it is also true that talk is cheap and character comes through when it’s tested. So, you wonder, how is it that when he had a run-in with his producer and actor after the well-deserved debacle of Department, Varma’s Voltaires and Ayn Rands went for a walk, with pedestrian pettiness taking their place? His tweet: ‘Whatever else happening to Department I am supremley happy tht I don’t nd 2 see the faces of Sanjay dutt nd Dharam uberoi fr rest of my life’. There were more like this. Or, why is it that when he tweets of superstars, the impression you unfailingly get is of him lathering them with butter?

» ‘Just watched Bbhuddah and am. angry with bacchan that hes such a chootiyaa not to do films like this nd am such a lund not to realize this.’

» ‘I think from now on the only way Salman khan can ever hope to have a flop is if he ever does a film with me!’

Unlike Varma, Mahesh Bhatt is not a suck up artiste posing as a nihilist. Sure, he plugs actors and crewmates who star in movies made by his production house, but that’s straightforward business. Where this filmmaker gets interesting is in the neverending aphorisms he doles out. Like these:

Don’t be guilty about being befuddled. To understand Bhatt, you must go into his past. He was once a follower of Rajneesh, and it was not armchair pop spirituality. He was a full-timer who gave it up. Like all extremists, he then turned to the other end—claiming that materialism was the only truth. He also still needed to follow someone, and that was UG Krishnamurthy, a self-styled anti-guru but who in Bhatt’s biography of him comes across as exactly that, a guru. From Bhatt’s tweets, you can see that his own yearning for gurudom persists. Can there be any other explanation for this need to thrust one-liners so relentlessly upon the world? It’s a condition associated with spiritualism—proselytise by being cryptic.

When it comes to the three Khans, alas, there is little to dig out from their words because you just don’t know if they are the ones whose words they are. Take two tweets made by Salman (@beingSalmanKhan) after speculation arose that he would be bidding for the Deccan Chargers T20 team. They went like this in quick succession:

That reeks of attitude, right? The sort of thing that got him court cases and also made him a superstar. So you almost believe that Salman does his own tweets. And then suddenly, you get this: ‘ Omg ! Jst heard priyanka chopra’s english track 3 times bak to bak , called in my city. Its fab, outstanding ! SALAAM miss chopra .’ Do supermen say ‘OMG’? Isn’t that too girly in tone? And how is it that he stays in hibernation and suddenly awakens with enough Twit-energy to write a micro novel on Sarabjit Singh just as promotions for his film Ek Tha Tiger start?

Shah Rukh Khan’s tweets (@iamsrk) do look like he is doing them himself, but there’s really not much in them except how nice a person he is. Once in a while, he deigns to do a question-and-answer session with his followers—again, to re-emphasise how nice a person he is. The image, it appears, has completely taken over. The best insight you get from his handle comes from what he did to the account itself. Some time ago, he dropped out of Twitter and later explained that it was because he was getting abuse from strangers. It is not something people of his stardom are used to, but then Twitter is a great leveller—king and ugly commoner all walk the same road. And it said something of his authentic self again when he returned to Twitter, despite the abuse, in good time to promote his home production Ra.One. So here’s the deal—there is no reason for him to suffer such abuse, but when it comes to his career, he will still do it. This, incidentally, is the First Law of Bollywood: the density of the ego must depend on circumstance.

The less said about Aamir Khan the better, because he says very little. He was a pioneer of social networking for filmstars when he started a blog some years ago. But he too is mercenary now, dropping in only when he has something to promote, like a Satyamev Jayate.

The one person who tweets from the heart has to be Amitabh Bachchan. This is a man whose image and reality display no dissonance. He is perhaps past that age; perhaps he has outgrown stardom. But there is still something peculiar about his Twitter persona. He is the only person we know of who numbers his tweets. So T1 was his first, and right now, he is in the T870s. How does one read this? That stories of his discipline are not only true, he is a manic expressive? It also perhaps indicates an eye to posterity—an online memoir of sorts. In any case, there is some mild Obsessive Compulsive Disorder at work there.

Stray exceptions aside, tweets by actresses are vacuous. The most spunk on display was when Sonam Kapoor ganged up with her I Hate Luv Storys director Punit Malhotra to mock Shobha De after a terrible review. But even then, Sonam’s contribution was ‘hahahaha’ to Malhotra’s calling De an ‘old fossil’. Otherwise, when it comes to actresses, Twitter is a fairy world of pretty women talking pretty things. Where the milk of good natured glee and human kindness flow from every pore and is returned in full measure. There’s a PhD there for any researcher who does a comparative study of the number of Priyanka Chopra’s thank yous. This was her during the Barfi release period:

» ‘And Kolkata it is!! Thank u xaviers college for making team #Barfixaviarian!! Had toooo much fun!’

» Thank u everyone for so much love affection and appreciation for#Barfi and #inmycity !I’m so overwhelmed..this weekend was my toughest exam’

» ‘Gotta thank Anurag sir for seeing jhilmil in me..rk ileana 4 being the most amazin coactors!Congrats Team Barfi!So proud to b a part of this – Priyanka Chopra’

» ‘Also thank u @iamsrk for lending me all ur my name is Khan research, u gave me perspective on Jhilmil..owe u another one..love always’

Even a hint of plain old bitchiness by any actress would help, but we have no such luck. All you can do is pray for them to goof up. Like Bipasha Basu when she thought it was cute to display a photo of two girls tying her shoe laces and then sat bewildered as child labour accusations came hurtling. Her hurried defence was that it was her sister and friend tying the laces, and that she, in turn, often tied their laces too. Well, if you are a believer, believe.

The joker on Twitter is Shirish Kunder. This filmmaker is a father of a thousand bad puns: ‘ An #Apple in court keeps the Samsung away.’ But from his Twitter handle, you also know that he can bleed. He is currently going through a metamorphosis. It was just a year ago that he was taking digs at Shah Rukh Khan in public over Ra.One. After a slap from Shah Rukh and a patch-up sponsored by wife Farah Khan, it took the filmmaker just under a year to tweet an apology: ‘I’ll always regret one thing that I feel very guilty about. I sincerely apologize for my tweet on Ra.One @iamsrk’. It soon became known why. Akshay Kumar had just pulled the plug on Shirish Kunder. Every director needs a star if he hopes to survive, and the tweet was little more than a wail in 140 characters.