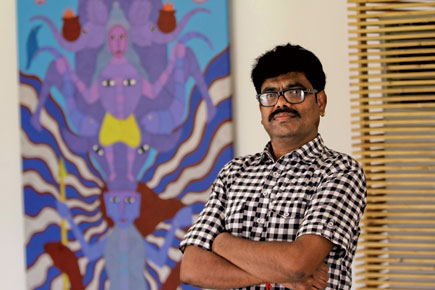 Paris-based gallerist, curator and art collector Hervé Perdriolle undertook a valiant India adventure in the mid-1990s. He came looking for India’s Jean-Michel Basquiat, the American- African graffiti artist who emerged from the streets to exhibit his supreme talent in some of New York’s best- known galleries, shaking up the art world of 1980s America as an unstoppable wild child. And, when Perdriolle discovered the exuberant paintings of the Gond artist Jangarh Singh Shyam (1960–2001), with their delineation of leaping tigers, ancient deities and radiant peacocks, Perdriolle knew that he had nailed his Indian Basquiat, ‘in spite of no formal resemblance between the works of both the artists’. Jangarh Singh Shyam’s ascent from the forests of Mandla district in Madhya Pradesh to become the most renowned Gond artist, followed by his tragic end (he committed suicide during a residency in Japan) could be compared to the life and legend of Basquiat himself (who died of a drug overdose)—their similar artistic trajectory eerily supported by the coincidence that both Jangarh Singh Shyam and Basquiat were born in the early 1960s.

Today, the inspiring genius of Jangarh Singh Shyam has left in its wake a second generation of highly gifted Gond artists. These artists have found their own voice within the ritualistic practice of the Gond art tradition and are getting recognised more by their signatures than just the art form of their communities. Their presence in the urban milieu is arguably gaining prominence. Private art collectors, gallery owners, online auctions and even airports are gradually waking up to the allure of traditional art rendered in modern-day aesthetics—artworks which do not reflect in their works what some would call a predictable ‘crafts museum mentality’. While not one Indian tribal artist has managed to trump the record set by Jangarh Singh Shyam, whose Landscape with Spider fetched Rs 14.5 lakh at a 2010 Sotheby’s auction, a number of contemporary Gond artists have seen a significant appreciation in the value of their paintings. Ask any urban art gallery owner today to identify some of the most interesting vernacular artists who swiftly find patrons, and names such as Venkat Raman Singh Shyam, Bhajju Shyam, Mayank Shyam, Durga Bai, Dilip Shyam, Narmada Prasad Tekam, Kalam Patua, Manisha Jha, and Ram Singh Urveti would invariably be mentioned. Barring Manisha Jha (Madhubani artist) and Kalam Patua (Kalighat painting), all the other artists are linked by one common factor: they are also practitioners of Gond art, paintings that use signature patterns like dots or lines, and portray the life and philosophy of this tribal community. And the formidable figure of Jangarh Singh Shyam is ever- present in their lives.

When Bhajju Shyam, 44, left his native village of Patangarh in Madhya Pradesh to seek employment in Bhopal at the age of 16, he did not foresee even a glimmer of a future as an artist, in spite of having an uncle in Jangarh Singh Shyam. He found employment as a watchman and later as a labourer to make ends meet. It was only when he was offered the role of an apprentice by his uncle—who at the time was working at Bharat Bhavan, Bhopal’s prestigious multi-art complex founded by the eminent Indian artist Jagdish Swaminathan—that he found his calling as a Gond art painter who could infuse new energy into an art form so widely practised by the residents of his village. With the towering figure of his uncle as mentor, “under whose supervision not one artist could copy or imitate a line from another artist,” according to Bhajju, he went on to participate in many exhibitions and workshops outside Bhopal and even won a state consultation award for Best Indigenous artist in 2001, after which he was invited by designer Rajeev Sethi in London to paint a fresco in an Indian restaurant. London took his breath away and this first trip outside his country unleashed in Bhajju an unprecedented creative force which he channelled into his delightful travelogue, The London Jungle Book, published by Chennai-based Tara Books. This visual treat invites readers to partake of the excitement of discovering a whole new world through Bhajju’s eyes. So, ‘The busy King’s Cross station of the London Tube becomes a serpentine King of the Underworld, Big Ben a giant omniscient rooster, and London’s female workforce—women who seem to Shyam to do most of the work “and happily”—multi-handed goddesses,’ as described on the website Brain Pickings.com. Today The London Jungle Book has been translated into Italian, Dutch, French and German, and Bhajju has lost count of the number of countries he has visited as an ambassador of Gond art.

With 10 illustrated books to his credit, Bhajju’s chief concern is to protect the primary source of his inspiration—the village bards who recite the enchanting origin myths from which Gond art derives much of its visual heft. “I want to train kids in the art of oral storytelling with the help of the remaining four or five bards in my native village,” he says. He is in Delhi to discuss the details of an upcoming exhibition in the United States and meet interested parties for his story-telling project. Comfortably attired in black-and-white checks teamed with black trousers and a pair of small but thick copper balis, he cuts a fine blend of the bucolic and the urban. He briskly shows us around the expansive Ojas Art Gallery, pointing out his books and artworks from the recently concluded group exhibition on Gond art ‘Satrangi: A Gond Expression’—which was also taken to the Jaipur Literature Festival in Colorado this September.

Bhajju works with many private gallery owners today. “Private patrons, with their motive to earn money, have done a lot more to bolster new tribal art in this country. We have become more popular. I personally haven’t got much from my own state. I couldn’t even get a job in Bharat Bhavan.” He attributes his real breakthrough to his launch by Tara Books. His canvases are sold anywhere in the range of Rs 6–10 lakh outside the country, and from Rs 3–4 lakh within India. Many art connoisseurs consider him another Jangarh Singh Shyam in the making.

Venkat Raman Singh Shyam, 45, is yet another Gond artist who is sought after internationally, having done numerous exhibitions in Europe, US and Australia along with regular shows in Delhi, Mumbai, Bengaluru and Kolkata. His artworks, which have always tried to negotiate mythic depictions of nature and animal imagery with present-day events, are part of the permanent collection of Los Angeles County Museum of Art and the National Gallery of Canada. One particular work, titled Udta Haathi, fetched £25,000 at an art gallery in London recently. He sells his work anywhere within the range of Rs 2–3 lakh in India. However Venkat, who was discovered by Jangarh as a child, is not happy with the way Gond artists are identified only by the name of their community: “Why should there be a difference between the amount that we get and what the other modern contemporary artists get? Ours is not Gond art. It is very much contemporary art. Can you ever call The London Jungle Book Gond art? Kala toh kala hoti hai (art is art after all).” In order to drive home this sentiment, Venkat Raman Singh Shyam is releasing a book next April called Finding a Way. Autobiographical in nature, the book will contain 170 paintings by him and also pay homage to modernists like Picasso, Dali and Raza. The book, he says, is a bid to debunk categories like ‘Gond art’ and ‘tribal art’ as they do not do justice to the vision and ingenuity of any artist.

Among the youngest in the second generation of Gond artists to have carved a distinct space for himself is Jangarh Singh Shyam’s son Mayank Shyam. At 28, he has already held group shows alongside big names like Subodh Gupta and Husain, and held his first exhibition at Kolkata’s CIMA art gallery at the age of 19. Being born and raised in a city has had its effect on him, for even though he dutifully pays homage to his rural Gondi motifs, his canvases show a marked tendency towards abstraction, a sense of isolation an urban resident might easily recognise. At a Sotheby’s auction in 2007, one of his works sold for Rs 2.5 lakh. But Mayank isn’t too bothered about prices like any newbie artist full of idealism and hope. “I am too busy figuring out where all I can show my works and which places can work out an exhibition for me,” says Mayank who hopes to travel outside his country one day.

Things are no longer the way they were at Bharat Bhavan in Bhopal. In the days of Swaminathan, who is credited with discovering Jangarh Shyam, many tribal art exhibitions used to take place. Now, while there is a tribal art gallery at the complex, it is mainly focused on rotating its permanent tribal art collection. Ram Singh Urveti, 45-year-old Gond artist who was on his way to discuss the details of an upcoming exhibition at the Mumbai International airport, tells Open in a telephonic interview, “After Swaminathan’s death, exhibitions on tribal art became infrequent. There has hardly been any major exhibition at Bharat Bhavan on new Gond art in recent years.”

The focus has shifted from Bhopal to Delhi. Tulika Kedia, who runs India’s first fair trade tribal art gallery, Must Art Gallery, in Delhi’s upscale Panchsheel Park, says she was struck by the powerful liveliness of Gond art, which inspired her to invest in an exclusive tribal art gallery. With an enviable collection of around 20,000 artworks collected over a period of seven years, Kedia has been turning in a steady profit that helps her keep adding to her already-vast collection. Apart from online auction houses like Saffron art, she says, “A large chunk of my clients are Indian corporate buyers who adorn their homes or offices, and builders doing up malls.” Kedia intends to open a tribal art museum showcasing Gond and Baiga art at Singinawa Jungle Lodge at the Kanha National Park in Madhya Pradesh this month to reach high-end travellers.

Gita Wolf, publisher of Tara Books, which interweaves traditional art forms in almost all its publications, says that most tribal artists are still victims of an unequal relationship in the absence of a fair and established way to negotiate prices. They also do not have access to good design inputs. Instead, she feels, vernacular artists make wonderful teachers and they can easily be roped in for the purpose of art education in schools, thereby directly reaching a younger audience. Bhajju Shyam, according to her, is the most innovative Gond artist in India now. She too has pondered why Gond art is more visible than other tribal art forms. “I think the art form is very conceptual and full of ideas. You give it to the Gonds and they take it elsewhere. They are able to bring visual metaphors to anything.” She adds, after ruminating for a few seconds, “There is something very special in their approach.”