The Eye of the Beholder

Dharavi housewives go behind the lens to open up their worlds 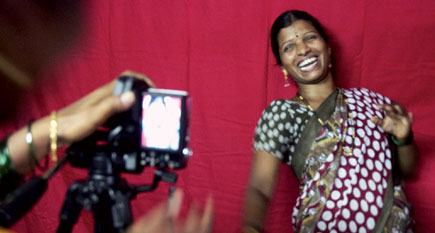 Dharavi housewives go behind the lens to open up their worlds

The aperture: the eye of the camera that deals in fractions: f/1.8 (blurred background), f/16 (background in reasonable focus). The aperture revealed both the worlds within and without to 36-year-old Anuradha Jogalamallu. When, as part of a photography workshop, she started taking photographs in her neighbourhood, she felt free, a feeling as exhilarating as it was strange.

Point-and-shoot camera in hand, glass bangles clinking, the homemaker explored her surroundings for the first time. Sure, she would step out for household purchases, or to lighten her husband Venkatesh’s load of bags, or for small rituals. But she was mostly at home. For Anuradha, her house was a shell where she raised two daughters and a son, sending the girls to junior college and the boy to high school. But if it cocooned her and kept her safe, home had also alienated her from a social life. She realised this when the camera opened its aperture to her.

“I’d never been outdoors [for any length of time] since marriage,” she says. It was Ganeshotsav 2013, the city’s most popular festival, followed by Navratri, and the outdoors was welcoming of photographers. At home, though, her mother-in-law was sceptical of the pursuit. “My saas told me, ‘Do anything you want, it’s not like anyone will give a damn about you.’ I went out nonetheless, and when I told her I was doing photography, she smiled,” Jogalamallu says, smiling herself.

She seemed elated to see her work featured in a limited-edition photobook titled Ladies Only: Stories For All, brought out at an exhibition at Art Loft, an upscale eatery and gallery in tony Bandra, worlds apart from Dharavi, the shantytown—the largest in Asia—that she calls home. She attended the opening of the exhibition, which featured her work along with that of her four homemaker neighbours, and discussed her conservative environment.

The photos in the book range from gritty photographs of people against shanty-studded backgrounds and sensitive non-kitschy portraits of the five photo-enthusiasts, to reflective studies of household objects hung on walls, and of ornaments in daily use arranged on a flat surface, which served as explorations of female identity. Many photographs feature the children of Dharavi, negotiating its congested and polluted spaces with the matter-of-factness only children can muster.

In one photograph, a schoolboy hangs from the top bar of a public swing while a few girls next to him strain to reach up, reluctant to jump. It’s a perfectly timed shot that provokes questions about the kind of conditioning that makes girls keep their feet planted on the ground.

Another photograph features a papad-maker in Dharavi sitting by her drying products as she examines the imitation jewellery offered to her by an itinerant peddler. It is taken from above, and the angle contributes to the photograph’s empathetic—but not maudlin—statement. Together, the photos offer an insider’s view of Dharavi, calm and uncontrived, decongesting the place of its Slumdog Millionaire-style mythologisation.

Visitors to the art gallery range from artsy Bombayites to foreign expats, all of whom seem taken by the women’s back stories. If photography’s cause is to freeze time and bridge distances between people, the exhibition was deeply heartening.

The five participants used Canon and Nikon point-and-shoot cameras—the most basic models—for four precious hours a week, five weeks in all. They were tutored in camera operation, taught “how to use the zoom, what is background and how to replay photos”, says Jogalamallu. But the women were not primed with aesthetic value judgements. “[The tutors] had us take photographs the way we wanted,” says Shobha Sonawane, 32. “When someone tells you, ‘Don’t take photos like that’, you make a mistake.” Sonawane’s story defies stereotype. She is a homemaker with a class nine education who uses Facebook chat to contact her husband. Sonawane’s husband Tushar has a blue-collar job in Dubai that keeps him away for 11 months a year. Her husband took the Dubai job because it gave a huge upgrade to his four-figure salary—he now makes Rs 60,000 a month, sending most of it to Shobha.

The long-distance relationship has its baggage and tensions, which were compounded by her pursuit of photography, if only for five weeks. “When he was leaving, I told him, ‘Trust this bindi on my forehead; if you want, I’ll not even go outdoors’.” She confined herself to her house. The result: “I felt locked up.” He was jittery about her going out for photography. “I told him: ‘At least shut up for two days a week’. Then he came home [on annual leave] and said, ‘Take my picture as well’.” He has acknowledged her as the family photographer for festive occasions.

Sonawane speaks as bluntly as anyone who’s seen a new world open up for her. “I grew up in a conservative family. They found the perfect match and got me married into a conservative family,” she says. “I was stuck at home.” Her daughter had attended an art workshop with an artists’ collective called Art Room that had a project in Dharavi. It was soon to conduct a photography workshop for the children’s parents. Sonawane’s daughter put her name forward. “I shouted at her then,” Sonawane says. But, however grudgingly, she went over and picked up a camera.

One exhibition and a photobook later, photography for Sonawane is still about meeting people rather than art. She sees photography as a marker of important occasions and does not plan to take it up regularly. You might call her a dilettante. Nevertheless, it was a transformative experience. “I feel I can do something for myself. That hope has awakened through this process.”

The project was the brainchild of Aqui Thami, a member of Art Room. Though not an artist herself—she has a Masters in Social Work—she was one of many who regularly hold art workshops for children in Dharavi. During one such workshop this year, Thami struck up conversations with participating children, some of whom spoke of their mothers being cloistered. “One kid told me that her momma never goes out of Dharavi. I saw they had hardly any time left after household chores and kids—it was very discomforting. They needed something to have fun with, to go out, to make friends.”

Thami went back to Dharavi with a Mumbai-based photographer of British origin, Joanna Wingate, to conduct a workshop for parents. After the experience, Thami says, she understands that “for someone to step out of home and take one picture takes so much energy, and taking that picture changes that person so much.”

One of the photographers, 27-year-old Nirmala Narayane, says: “My husband has set aside Rs 10,000 for a new camera. He says, ‘Now that you know how, you take the pictures.’”