The Descent of Man

Rameshwar Broota’s examination of the male anatomy poses questions about vulnerability and brutality, the ravages of age and time, and the very essence of existence 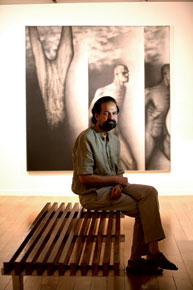 Rameshwar Broota’s examination of the male anatomy poses questions about vulnerability and brutality, the ravages of age and time, and the very essence of existence

We were never meant to know the truth behind the final work made by Jonas, the protagonist in Albert Camus’ story The Artist at Work. Mired by a string of successive achievements, and reluctantly in possession of an ever-expanding circle of invasive onlookers, Jonas finds himself shorn of the privacy he urgently needs in order to paint. Finally isolating himself in a dark, dingy attic, desperate to escape the cruelty of his omniscient audience, he starts to work on a canvas again. Deciding it is finished, he descends a ladder to return to the world, then faints. Camus eventually reveals to the reader the content of this masterpiece— a blank canvas with a word that reads uncertainly in translation as either ‘solidary’ or ‘solitary’. This contingent ambiguity links the story to the overarching title of the 1957 collection in which it had been anthologised, Exile and the Kingdom, and, in a curious, backhanded, circuitous way, serves as an excellent metaphor for Visions of Interiority: Interrogating the Male Body, the ongoing retrospective at the Kiran Nadar Museum of Art (KNMA) that marks 50 years of Rameshwar Broota’s artistic practice.

The nexus between Camus and Broota isn’t founded simply on the affinities between his solitary subjects and the figure of the self-exiled Jonas, it extends to the trope of the corporeal being of the artist inflected and infected by the psychological. After having subjected his body to solitary confinement, Jonas faints. A similarly dramatic incident seized Broota when he first began to withdraw into his own body, using it not as muse but subject, during the beginnings of his experimentation with the inherently aggressive technique of excavating the figure from a paint-layered canvas with the sharp edge of a blade; one he came upon by chance, in 1978, when he used a knife to erase a daub of paint he had mistakenly applied to a canvas. ‘The Archaeology of Experience,’ is what art historian Ella Datta has termed this process that is unique and integral to Broota’s practice since the early 80s, annotating it as a kind of ‘yogic sadhana’, a ‘mystical search for the nature of truth in tune with his meditative nature’.

Broota stood near a mirror one day, and began to intensely paint his form, ‘from morning to evening’. The nature of his technique required that it be performed within two to three days after the many layers—typically silver, ochre, burnt umber, modified tones of black—had been applied while they were still wet. Broota proceeded to extract the figure by scratching the blade into the textured layers, relentlessly lacerating stratums of paint to arrive at the revelation that realistical- ly mimicked his form. When he slept the first night, he woke up shaken by a violent dream. The gestures of his wakeful life had trespassed into his dreams. “It was as if I was scraping my own body,” he says in an interview.

It is within this cusp between the artist’s inner life and its corporeal manifestation that Broota’s figurative beings are animated. Where Michelangelo illustrates the creation of Adam by picturing a bearded god, held aloft by a vehicular unit of angels, about to touch the clay-moulded fingers of his masterpiece that has possibly already had life breathed in, Broota posits the Darwinian theory of man’s descent; seemingly superimposing onto his male figure all the mutative stages of his evolution, so that the singular moment of signification is in fact the product of lineage. Like Adam, fashioned in God’s image and likeness, the male figures in Broota’s Man series are primordially naked, but unlike the first occupant of Eden, they are not born innocent, and are obsessively devoid of female company.

After the satirical Ape series of the 70s, excellent excerpts from which punctuate the non-linear retrospective, Broota’s artistic inclinations moved away from social critique towards an interrogation of the self; a progression from the exterior to the interior, from the narrative-minded to the more autobiographical. The feminine, with its suggestion of sensuality, is an absent other. “I cannot see the female figure injured,” Broota says in defence of his dogged refusal to represent the female body. “I cannot inflict the same violence on her. My wife says I’m more of a feminist than she is.” But excuses aside, Broota’s most vehement explanation for persistently interrogating and excavating the male figure is a humble one. He has “not said enough about man”.

Broota’s interrogation of the male figure assumes the form of the X-Ray; it is developed as a meditative imaging of man’s skeletal structure. It is also impelled by what art critic Richard Bartholomew referred to as ‘plastic surgery’ when he exposed the affinities between the work of Jeram Patel, Himmat Shah, Ambadas, and Jagmohan Chopra in whose hands ‘art was a sharp instrument’. ‘They want to cut, to make an incision, to make the surface open up. They want to draw blood, and to cure, if they must cure something or the other, by a process of cleansing… They burn, carve, blister, emboss; they allow viscosity to create its own meander, space to suggest its own structures. They are concerned with what you can view, and not with what you will value. And though their images are related to the past experiences of man, experiences which have made man what he is today, they also anticipate in a metaphorical sense and physical sense the shape of things to come,’ he posits in an essay titled ‘Plastic Surgery and X-ray in Recent Indian Painting’.

When the essay appeared, in 1964, Broota had just graduated from Delhi College of Art, taking up the role of head of the department of art, Triveni Kala Sangam, a position he still holds 50 years later. Bartholomew saw Broota as a member of a new generation of printmakers that emerged in the mid-60s, along with his then wife Shobha Broota, Paneer Selvam, and members of Group 8, including Anupam Sud, Paramjeet Singh, Jyoti Bhatt and Lulu Shaw; he even has a photograph of a young, bearded and lanky Broota seated beside a bespectacled Sud in printmaker Kanwal Krishna’s art classroom in Modern School, New Delhi. But despite being an active contributor to the larger thematic being explored by this avowedly new generation, Broota seemed to prefer being a loner. Even during his encounters with the Delhi Shilpi Chakra, he sought to absorb rather than actively participate. “I was a listener,” he says. “What’s there to discuss in painting? You absorb what you see, there’s nothing to really talk about.” Artists like Jagmohan Chopra, Rajesh Mehra, K Khosa, and art critic Keshav Malik were among his friends.

Broota’s earliest work in the retrospective is his 1963 Self Portrait that reveals a 22-year-old man with a cursive moustache and evasive eyes. The title of a 1969 painting perhaps exposes his own artistic dilemma about which direction to proceed in. What To Do, a 70 inch by 100 inch triptych featuring three variations of the same emaciated male body, possibly a labourer, seems wedged between his evolving Ape series and his emerging inclination towards the nakedness of the flesh. He chose the satirical path, and his paintings in the early 70s were sardonic depictions of the ever-widening gap between the haves and the have-nots. Anatomy of that Old Story (1970) is the most literal exposition of this humanist endeavour, featuring a bikini-clad ape grinning fiendishly over the prospect of a full plate as two scrawny figures on the right, caricatured versions of Khosa and Broota, are aghast; in fact Broota’s painted counterpart is hungry to the bone. In his own words, the Gorilla or Ape series “tried to depict a pre-human reality typified by a terrifying brutality.” However, towards the late 70s, his focus began to shift towards the interior, and his figures assumed both solidity and solitariness, the monochromatic effect served to minimise distractions, so that after the archeological excavation facilitated by the nicking of the blade, what emerged was fragile, flickering light; the possibility of a soul. Monumentality of scale was integral to Broota’s continuing interrogation of the male body. Pointing at Runners, a 1982 work that was among collector Kiran Nadar’s very first purchases, Broota admits to thinking of his subjects according to size. “This subject demands scale,” he says. “If it was 40 inches by 40 inches, it wouldn’t have the same effect.” It explains why his total output is limited to 300 paintings. In his more recent work, the intensity of scale is most prominent as the large canvases depict not whole bodies as much as abstracted parts, surface wounds, perforated skin, stigmata. They are traces “suggestive of man”, of what is “left behind” or “disappeared”, “fossilised space.” They represent, according to Broota, “man and his fate, like his existence when civilisation is wiped out.” They hint at suffering and pain while simultaneously proffering the possibility of ecstasy. The solitariness of man is compounded in this synecdochic process of isolating a fragment of the body.

Visions of Interiority: Interrogating the Male Body restricts itself to Broota’s paintings, omitting both his photographic oeuvre and his experiments with filmmaking, and allowing for a greater study of his meditative exploration of male corporeality; its repulsiveness, its lure, its yielding to weight, its evocation of brutality, its messy cartography of veins, its inner being reflected as light. They prove what the late Malik wrote in 2011: ‘It is himself that, in truth, Rameshwar Broota remakes. He has been forever making and remaking himself in an effort to surpass himself.’

(Rosalyn D ’Mello, former editor-in-chief of Blouin ArtInfo India, is a Delhi-based freelance writer. Visions of Interiority: Interrogating the Male Body, Rameshwar Broota: A Retrospective (1963–2013) is on view at the Kiran Nadar Museum of Art, Saket, until 20 December 2014)