The Curator Must Play Critic

How large and comprehensive should a retrospective be? Three current shows, on the works of KK Hebbar, Krishna Reddy and SH Raza, offer answers 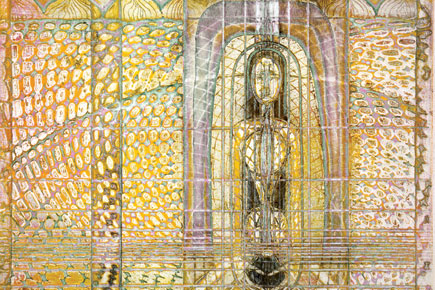 How large and comprehensive should a retrospective be? Three current shows, on the works of KK Hebbar, Krishna Reddy and SH Raza, offer answers


For an artist, a retrospective is not merely a curated account of a lifetime spent in the pursuit of artistic practice; it is much more than the sum total of all the works selected for display. A retrospective is a grand, ambitious gesture; an attempt at immortality; an articulation of an inherent desire to leave behind an artistic legacy. It is an act of looking back at the past, an act of introspection; an examination of all the influences that have impacted the artist’s oeuvre, the various phases that have transformed his art. Even if posthumously curated, a retrospective remains a trial where the artist’s soul is bared for spectators to make what they will of his work, where the work must bear testimony to the artist’s tryst with art.

How, then, must one measure the success of a retrospective? The range and quantity of works that form the exhibition cannot be the only indicators of a good show. Expanse is one thing; analysis another. And more often than not, the curator’s natural impulse veers towards cramming the gallery space with an exhausting number of works. The effect can be tiresome instead of overwhelming, and the display often fails to do justice to the artist’s contribution to the world of art.

Such is the case with An Artist’s Quest, the KK Hebbar retrospective showing at the National Gallery of Modern Art (NGMA). The curators, the artist’s daughters Rekha Rao and Ranjani Prasanna, manage to avoid some of the mistakes made by Hebbar himself in 1968 when he was about 29 and had held a retrospective of 62 paintings. Art critic Richard Bartholomew, who had reviewed the show for Thought, was unhappy about the selection, which he felt was too one-sided. ‘In this so-called retrospective we have 46 works from this decade and out of this 18 are from 1968. There are only 13 paintings of the early period representing the works of the first 11 years,’ he wrote. ‘The result is that we meet a Hebbar known to this generation of artists and the art-conscious public. One would have liked to see more of the [Amrita] Sher-Gil kind of Hebbar, for instance…’

Hebbar’s older works, especially those done in the 1950s, are pregnant with promise and feature a distinctive style. The line drawings in particular are meticulous and confident in their precision and style. And it is to the curators’ credit that this early phase of Hebbar’s work gains prominence through the selection. The line drawings made as part of the Silappadhikaram (The Story of An Anklet) series in 1954 splendidly illustrate the eponymous epic Tamil poem by Illango Adigal. Some of the early paintings too, like Cattle Mart, a well executed gouache on paper done in 1944, captures the essence of Hebbar’s early concern with depicting scenes from rural life in the same vein as Sher-Gil. But Hebbar’s later work comes across as mediocre, especially the semi-abstract works like Energy, Jal, and Cosmos which are too literal in their conceptual framework. One doesn’t really get a sense of the phases in Hebbar’s oeuvre, his decision to move away from the obviously figural and his engrossment with organic life forms, as it were. One wonders if there was much anguish over the decision to include Hebbar’s portraits. Compared to some of his contemporaries like Biren De and even Husain or Gujral who were excellent portraitists, Hebbar comes across as amateur. While his portraits hint at his proclivity for experimenting with different styles of painting, they make one question Badri Narayan’s declaration of Hebbar as ‘an excellent portraitist’, which is included in a thin pamphlet accompanying the show. The portrait of Nehru done in 1960, for instance, is plain tacky and amateurish. So is the portrait of SA Krishnan, which is essentially a floating head emerging from a background of colourful splotches. Two of the other portraits (Portrait of a Foreigner, 1946, and Portrait of Dr Shivnama Karanth, 1986) are actually unfinished, and one wonders if Hebbar himself would have ever chosen to display them.

Overall, the verdict one is compelled to reach after spending time in the zigzag maze that is the New Wing of the NGMA is the same that Bartholomew arrived at after the 1968 retrospective. ‘To judge from the repertoire in this exhibition, Hebbar’s contribution to contemporary Indian painting is nothing more or less than a brilliant assessment of the golden mean of being ‘contemporary’, and thus in the picture all the time,’ Bartholomew wrote in his review. This is not to deny Hebbar’s relevance; his experiments with symbols and abstractions, his skill in terms of line, his search for an Indian aesthetic. But while we get a sense of the sweep of Hebbar’s artistic oeuvre, we catch only fleeting glimpses of its depth. The curators seem to absolve themselves of the need to give us any sense of perspective, and abstain from placing Hebbar’s work in the context of his contemporaries or engaging critically with the question of his relevance in the history of modern Indian art.

Which leads us to ask the same questions that Bartholomew had asked the art fraternity then, and for which we have yet to receive answers. How large and comprehensive should a retrospective be? And how much work should there be to substantiate an event as being retrospective in nature?

The Embodied Image, the Krishna Reddy retrospective on view at the Indira Gandhi National Centre for the Arts (IGNCA), on the other hand, impresses upon the viewer the exquisite range and intensity of Reddy’s talent. Fortunately, the curator, Roobina Karode, has resisted the urge to inundate the gallery space and has focused instead on featuring works that are representative of Reddy’s genius and technique. Besides prints, the exhibition also includes some of Reddy’s earlier work in other media, like ink on paper, woodcuts, watercolours, and a few of his sculptures. Neatly and judiciously arranged, the exhibition is friendly and intimate and easy to walk through. The few zinc and copper plates on display beside the impressions they were used to make, and the section featuring photographs of Reddy either at work or in workshops with his students, and the printmaking apparatus that the photographs surround give the spectator some idea of the intricacies involved in the process of printmaking.

Still, the Reddy show is by no means an example of thoughtful curation. In fact, the sense of revelation one experiences when confronted with a Reddy print can almost distract one from some shortcomings on the part of the curator. For instance, there ought to have been some kind of commentary or some kind of curatorial intervention running parallel to the display; something to that effect would have enhanced the overall experience of the show. Sure, there was a banner at the entrance annotating Reddy’s life as an artist, but few visitors actually cared to engage with the barrage of text that had been crammed onto it. There were no indications either of the phases or transitions in Reddy’s life, and if it weren’t for the brochure that was kept at the entrance that few visitors cared to read, or the film being screened in another room to which no real directions were given, the lay visitor would have had no indication of Reddy’s enormous contribution that revolutionised printmaking—the technique of viscosity printing that allows numerous colours to be printed at one time on a single plate. In fact, what the show failed to do was place Reddy within the context of printmaking in India, which, like photography, never received the kind of respect that was reserved for painting because of its inherent reproducibility. Despite the stepsisterly treatment, India produced such brilliant printmakers as Kanwal Krishna and his wife Devayani, and Jagmohan Chopra, who, in 1968, founded Group 8 as a collective for Indian printmakers. This omission on the part of the curator is grievous, in this reviewer’s opinion, because it isolates Reddy’s work from its context and even understates the genius of his vision, technique and artistic pursuit.

The Raza show at the Lalit Kala Akademi and at Vadehra Art Gallery, on the other hand, achieves the opposite end. It overstates, to a certain extent, the consistency of Raza’s artistic practice. Curated by Ashok Vajpeyi, the show, though not slated as a retrospective, contains new and old work by the legendary painter who, after decades spent in Paris, returned to India some months ago. This is his first solo show since his return and is fittingly titled Punaraagman (Homecoming). Nothing seems to have changed though for Raza, who continues, in his new work, to flog his pet theme: the Bindu. Four long banners from the ceiling to the floor graced visitors right at the entrance to the Lalit Kala Akademi, each containing an unapologetic apology. ‘I have no apology for my repetition of the form of the Bindu. With repetition you can gain energy and intensity—as it is gained through the Japmal, or the repetition of the word, or a syllable, until you achieve a state of elevated consciousness,’ read one banner. ‘My earlier Bindus were not vibrating, they were dense and solid, as pure form. Later the Bindu appeared as concentric circles of energy expanding. Still later they began moving through Space as the sun moves across the sky,’ read another.

Raza’s new work is sloppy and doesn’t have the intensity of matter and spirit that his earlier work did. In fact, it makes one wonder if his pursuit of the Bindu through this repetition is perhaps a convenient way of playing safe and avoiding risk. Perhaps the repetition is a risk in itself, a giant ‘fuck you’ in the face of reviewers like this one, who is audacious enough to demand new work from the octogenarian, or irreverent enough to expect at least a certain standard of consistency or effect despite the repetition, or even on account of it. It is as if Raza is spiritually as engaged with the philosophy of the Bindu and concept of Purusha-Prakriti  as he always was, but his flesh, weakened by age, can no longer illustrate his excitement. One feels something akin to pity when you contrast the intensity and brilliance of the earlier paintings on display with their brand new counterparts. The sight of Raza staggering across the gallery on his wheelchair, body relenting to the dictates of age, forces you to think about the slipping away of time.

It makes you wonder how long before the body caves in, how long before auction houses make money out of mortality, how long before Raza becomes so legendary that the bulk of his work isn’t allowed to be touched by negative critique. Perhaps that’s already happened. In India, art continues to flourish, both good art and bad art, economic downslides notwithstanding. However, we have plenty of practitioners of art and too few critics to lend perspective. Given the situation, the curator has to function not merely as someone who selects and arranges works for display, or who ideates on behalf of gallerists. The curator must serve as critic too, and thus mediate and encourage a persistent dialogue between the artist and society.