The Colour of Life

The Russian artist Zurab Tsereteli hobnobbed with Picasso and Chagall in the 60s. He’s now painting flowers in Moscow. Shaikh Ayaz asks him why 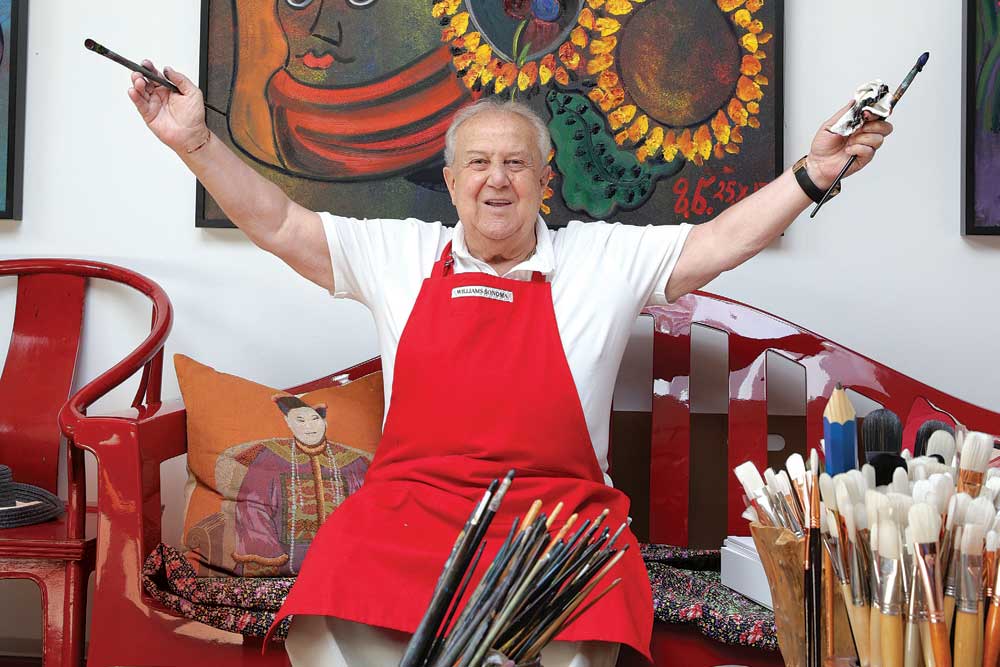 ONE RECENT summer morning in Moscow, dressed in a woollen jacket with a red silk scarf thrown neatly over his neck—more a style statement than to ward off the Russian chill— Zurab Tsereteli is waiting to receive Naina Yeltsina. Boris Yeltsin’s widow, Yeltsina is here to unveil Tsereteli’s bust of the Russian Federation’s first president. Amidst light, essentially ceremonial security cover, she finally arrives. Tsereteli and she meet and hug like old friends (which they are). The bust of Boris Yeltsin is one in a long line of Russian historical figures that have obsessed Tsereteli for decades now. Hobnobbing with the Russian and European elite is just another day of work for the famous sculptor, but what he enjoys the most is getting back to the privacy of his Prechistenka studio to “just paint.”

Among the first things any visitor sees in Moscow are force-of-nature sculptures in pedestrian-packed public squares. Some, like one statue of Peter the Great, rise out of the river and loom over the horizon. They all have a common provenance—the flamboyant 84-year-old Russian artist. Born in Tbilisi, Georgia, Tsereteli is the much-envied public performer of Putin’s Russia who loves to attract attention for both the right and wrong reasons. Highly prolific and equally criticised, with a private museum in Georgia, a gallery in Russia and studios in Paris, New York, Tbilisi and of course Moscow, he is a superstar of Russian modern art. Millennial Russians, however, likely know him best as a sculptor whose monumental bronze and copper showpieces adorn cities like Moscow and New York.

By his own admission, Tsereteli is a slave to the arts—and “to women”, as he likes to joke. “He’s drawing all the time. Sometimes, in a conversation, you may feel like he’s focused more on sketching than what you are saying. But don’t get fooled by that. He’s listening to everything you are saying,” says Vasili Tsereteli, his grandson and director of Moscow Museum of Modern Art who acts as our translator. Tsereteli speaks only Russian and Georgian and seems to get easily distracted. “Not distracted,” he corrects us. “I am attracted by beauty. They can be women, nature, paintings of Picasso, Chagall, Van Gogh and Matisse or just the clear blue skies on a beautiful day,” he says, as we sit at the Russian Academy of Arts’ cafe for our first chat after a brief introduction at the Yeltsina launch. According to his European dealer Stephan Stoyanov, Tsereteli is a typical Georgian man. “Women are the major draw for any Georgian man. These men are colourful and have an insatiable lust for life.”

That statement rings true when you look at Tsereteli’s paintings. His works, both as old as the 1960s and as recent as 2018, are a riot of colours. “Life is nothing without colour. You can’t paint if you don’t have a feel for colour. It’s a pure waste to teach someone how to feel,” he says. Women occupy centrestage on his larger-than-life canvasses, but so do musicians, troubadours and circus performers. While his friend Pablo Picasso’s late period was flushed with female sexuality and curvaceous lovers, Tsereteli’s women, with their enlarged hands, are the very opposite. Are they virtuous farm girls? Perhaps. They even appear to express a sense of piety.

“I am like a conductor who composes from all musical instruments. You can’t say that I will only play violin and not guitar, piano and drums” – Zurab Tsereteli

Aside from celebrating female beauty, music has fuelled hundreds of his paintings over the years. In childhood, a young Tsereteli dreamt of being a singer, as it was common for Georgian men to have good voices. When he conducts his weekly Master Class with children in Moscow, he switches on the radio and paints to the tune of Georgian music. “It’s a sight to see,” says grandson Vasili. “It’s like a ballet with the brushes. He’s dancing and the kids are enjoying every moment of being in his company.” Tsereteli declares that the Fauvist vibrancy of his over 10,000 paintings (at last count) is both an ode to his sunshine hometown of Tbilisi and to Henri Matisse and Marc Chagall. “Colour for me is a celebration of life,” he says, offering Matisse’s ‘I feel through colour’ refrain as his mantra.

Tsereteli flits between a range of mediums, sometimes working side by side on oil, enamel, bronze and copper: balancing sculpture and still life on one hand and painting from live subjects and memory on another. He says it’s all about realising that feverish creativity and idea that keeps you up at night. Comparing his palette to symphonic orchestra, the artist says, “I am like a conductor who composes from all musical instruments. You can’t say that I will only play violin and not guitar, piano and drums.”

INITIALLY JUST A painter, Tsereteli’s horizons broadened after moving to Paris in the 1960s. Born into a poor family, he says in Soviet times all the action was in Europe, not to forget the widespread resistance to freedom of art and expression. “When my grandfather first came to Moscow,” Vasili says, “he didn’t own even one proper pair of shoes. He wore one black and one blue and thank God, nobody noticed!” As a student, the academy-trained Tsereteli challenged the stubborn Soviet slogan ‘Art for the people’ with his own ‘Art for art’s sake’. Tsereteli recalls, “As a young artist, major movements were taking place in Paris and that’s where we all wanted to be.” Paris happened to him by accident. Tsereteli’s wife Inessa Andronikashvili traces her roots to a Byzantine royal family. She had an aunt in Paris whose husband worked for President Charles de Gaulle as a translator. When Andronikashvili got an invitation to travel to Paris once, the Soviet government barred her. So, she sent her husband instead.

“Paris was a turning point,” Tsereteli says, sounding nostalgic of the time he spent at that mecca of art. Before going to Paris, he was just a painter, working on sketches and oil. But socialising with Picasso and Chagall, he learnt that “an artist is essentially free.” In Paris, he found liberation—and his voice.

“Life is nothing without colour. You can’t paint if you don’t have a feel for colour. It’s a pure waste to teach someone how to feel” – Zurab Tsereteli

“Picasso was a major influence,” he says. “Picasso taught me that an artist can do anything. He can sculpt, paint; he can do ceramics; he can be inspired equally by Rembrandt and African masks. He’s a free bird.” Chagall, a fellow Russian, was another of his mentors in Paris. Dreamy and lyrical, Tsereteli’s oils from the 1970s bear a Chagallian stamp. Tsereteli visited the elder artist often. Nobody was allowed inside Chagall’s sanctum sanctorum, but a curious Tsereteli did manage to break the cordon. What he saw in that studio amazed him. “I am still haunted by Chagall’s palette and paints that I saw that day. It was like a stroke of sunshine,” he says.

Tsereteli paints mostly from memory, remembering how one of his teachers Vasili Shukhaev made him stand with his back to the model and paint. “My teacher used to say that when you paint from a live model, you copy. But when painting from memory and imagination, you capture the soul.” The only time Tsereteli relies on models is when he’s painting flowers—a theme that he never tires of. “I am always testing my colours on flowers. In Moscow, we have no sun. I don’t want my paintings to be grey. Flowers give me the chance to be among colours and to constantly create new ones.”

A devoted Charlie Chaplin fan, he likes to depict the Tramp across a variety of mediums, his favourite being oil and sculpture. “That man was a paradox. There was something sad about him, and yet, I can’t think of any artist who gave so much joy to humanity.”

Back at the Russian Academy of Arts, which also houses the Zurab Tsereteli art gallery, we are literally dwarfed by one of the artist’s enormous sculptures called The Apple. Viewers can walk through the spatial structure. A philosophical parable on Adam and Eve and the Biblical story of creation, it’s dotted by human pain and progress. A snake coils at the feet of Eve, symbolic of fertility. Tsereteli studied Indian temples for this sculpture. To Indian eyes, the mating couples of The Apple instantly point to the Kamasutra.

What drives Zurab Tsereteli, I ask? One word: “Love.”

Later, at the end of a long day of socialising and painting, he presides over the dining table of his museum- like home. Dressed in a cocktail jacket, globular rings crowning his fingers, Tsereteli raises a toast. “There are many beautiful women here. Let’s drink to them,” he declares, nodding impishly at a woman guest.