The Call of the Camera

When Rajesh Jala made one documentary on the son of a militant and another on children who stole shrouds for a living, he didn’t expect the films to transform their lives, least of all his own 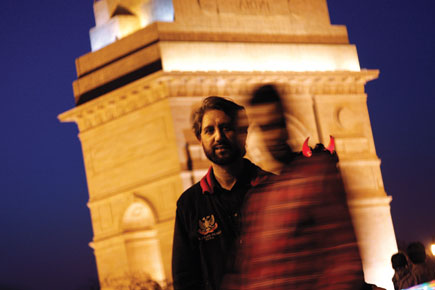 When Rajesh Jala made one documentary on the son of a militant and another on children who stole shrouds for a living, he didn’t expect the films to transform their lives, least of all his own


In May 2004, Rajesh Jala was walking along Srinagar’s Dal Lake with a camera when he saw a little kid scooping water out of a boat. Jala began to photograph him. The kid, seeing his journo jacket and long hair, mistook him for a foreigner and started speaking in broken English—only to be surprised when Jala replied in Kashmiri.

The kid asked whether Jala wanted a ride. Surprised that someone so young could handle the boat, he was thinking it over when another boy came running and warned him against it. The kid had drowned a customer a few days ago, he said. Jala turned a little cautious, but some instinct made him accept the offer. Thus did they embark on what turned out to be a long boat ride. Arif, the kid, was a very good boatman, it turned out.

Jala, a Kashimiri Pandit, had grown up without a mother, and, uprooted from Kashmir in the mid-1990s, he had lived with several Kashmiri families in a cramped hall in a Delhi refugee camp, constantly yearning for his father. Something about Arif struck a chord. The kid was his family’s sole breadwinner, and when Jala met Arif’s mother Farida, he was instantly drawn to their story. “Farida had been kidnapped as a 12-year-old by a militant, and then gave birth to his first child two years later,” says Jala, “Today, in her thirties, she is the mother of five children.”

Jala just knew he had to make a documentary on the family. “It was very difficult for me to come to terms with her story, but I was selfishly involved in my film. I could understand her misery, but did not allow myself to contemplate her misery.” His effort, Floating Lamp of  the Shadow Valley, came out in 2006.

Later the same year, Jala wanted to make a film on Varanasi but did not know how to go about it. He was there for a month, and began visiting cremation grounds. On the second or third day, he saw a little boy snatching a shroud off a corpse and going to his gang of friends. Intrigued, Jala followed the group. There were seven of them—Ravi, Gagan, Sunil, Yogi, Kapil, Manish and Ashish. He struck up a conversation, and became friends with them. He realised that the children regularly stole shrouds and sold them. They fed their families this way. The story of another documentary was staring at him.

Manikarnika Ghat is Varanasi’s busiest cremation ground, with over 100 bodies cremated daily. It is especially hot here in the summer, when temperatures rise to nearly 50º Celsius. “I kept wondering if I would be able to shoot there,” he says, “Then I thought, if these little kids are earning their livelihood here and surviving this place, then why can’t I just shoot this film?” Jala’s Children of the Pyre came out in 2008.

There is nothing to connect the seven boys of Varanasi with Arif of Kashmir, except that the real life sequel to their lives has been similar—the films changed the future of all of them. After the screenings and many awards that the films fetched, none of the eight children are doing what they were when Jala met them.

Jala says he got involved with their future once he began questioning his own motives. During a conversation, Yogi, one of the shroud thieves, had told him that he wanted to escape the cremation ground but his parents forced him to earn money this way. “That echoed in my mind. I realised that these kids needed help,” he says. Also, he felt guilty of having taken advantage of them. “I had this big dream of being a filmmaker since I was 12. When I first met these children, I had a purely selfish reason to make the film. I wanted to make a film that would have an interesting story to engage audiences with, that would also fetch me some money, awards and critical acclaim… But in both cases, especially when I was making Children of the Pyre over 18 months, I developed a deep bond with them. I initially thought that when I sell this film, I would give a certain portion of the profits to these kids. But I wasn’t sure whether anyone would buy a film of this kind.”

Jala’s friendship with the kids grew stronger once he realised how completely they had put their faith in him. They began to give him missed calls when he would get back to Delhi. On calling them back, they would ask him when he would return to meet them, and request him to bring along some clothes or sweets. Though he was giving them some money for their participation in the film, he wondered whether he was exploiting them. “Justifying my actions wasn’t easy. It was okay to give them the little money I was, but eventually, I knew that I was the one gaining the most from the film. So I had to answer that question of my conscience.”

Arif today goes to a private school and has a tutor to guide him. “I assured his mother that I would help them on the condition that he would stop rowing the boat,” says Jala. The boy was miserable at being told he couldn’t row anymore, but Jala says it was important to ensure his future. “Besides, the boat was also in very bad condition, so they couldn’t pull it anymore.” Some friends of Jala who saw the movie donated money to the family. One lady from the US gave $550 in 2007, which ensured that their entire expenses were taken care of for the year. “A publisher friend of mine is now taking care of Arif’s school and tutor fees for a year. But it is complex, giving the family money—the father would snatch it away. Immediately after I had made the film, I opened a bank account in Farida’s name. I direct people to that account when they want to offer help. Last summer, they received two big cheques after a screening in Chennai.”

Children of the Pyre also did well for its subjects. Thanks to its release, in 2009, Plan International, an organisation working to relieve children of poverty, launched the Bhagirathi Project to transform the lives of 300 children working in different ghats of Varanasi, including these seven kids. They don’t give money, but empower them with skills.

Jala was grateful, but didn’t feel it was enough for the seven children. “My immediate concern was to stop these kids from going to the cremation ground. Bhagirathi Project did not yield that result because the kids were still going to there for their livelihood. So I had to find some money that would help them run their families some other way.”

Jala himself is not rich. To make Children of the Pyre, for example, he had to use the money he’d saved to buy a flat. The Best Documentary Award at the Montreal World Film Festival in 2008 came as vindication. After that, whenever the film would be screened anywhere in the world, he would get an overwhelming response, and people would come asking for ways to help these kids. After a screening in New York, a man called Kevin contacted him and offered to educate the Varanasi children. Three of them had crossed that age when they’d want to study, but there was hope for the other four. Kevin found a boarding school in Sarnath run by an Italian man, and the four children have been admitted. As for the elder three, Jala is trying to help out in other ways. “We sent them for English-speaking courses, but they didn’t do well there either. They are not disciplined kids. Their lives can get on track only if I have a more active role in Varanasi. One plan is now to give them driver’s training, and then we could perhaps arrange the capital investment to get them auto rickshaws through a loan, which they could then repay on their own. It’s not final, but I don’t see any other way out. Except for Gagan—I am very keen to see him as a dancer, but it’s all about his own commitment.”

In Children of the Pyre, one of the younger kids, Sunil, says, “I don’t love my father.” That is also what Arif says in Floating Lamp of the Shadow Valley. Jala says such moments make him look back at his own dark times. “Working with these children brought back memories of growing up in Kashmir without a mother and an absentee father. In some ways, we were all in the same boat, in different circumstances and at different times. Perhaps this made it easy for me to relate to the kids.”

Whenever Children of the Pyre is screened, Jala says he is typically asked if the experience has changed him. “Considering all the struggles that I have gone through in my childhood and youth, the experience of working with these children has made me very conscious of complaining. I do complain, but now my thoughts immediately go to these kids and their struggles. I am not saying that both these films have changed my life, but… Earlier, I would look back at my childhood and pity myself for having been through hell.

Now when I try to do that, which is rare, I realise my agony as a child pales in comparison with theirs. In a way, therefore, these two films are the beginning of what I am.”