Sing Back in Anger

Rap is the new language of dissent among youngsters in Shillong 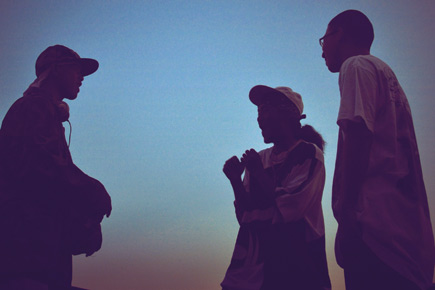 Rap is the new language of dissent among youngsters in Shillong


It’s fitting that I run into Andrew Lyndem and Ratul Hajong on the streets of Laitumkhrah. After dark. When the air is filled with the hurried bustle of after-office shoppers and the languid, restless torpor of youngsters. There isn’t much by way of entertainment in Shillong, and on autumn evenings like these, the youth claim the outside as their own—spilling onto pavements, clustering around aloo-muri vendors, standing below yellow-light lamp posts that cast long shadows into the night. It’s fitting because the duo, who are part of a loose conglomeration of artists called Cryptographic Street Poets (CSP), are musicians who draw their inspiration from the town’s sidewalks. “This is where we hang out,” says Andrew aka P.O.E.M. (Prophet of Esoterical Metaphors), all of 19, and the only bespectacled rapper in town. “We’ve lived around this area all our lives.”

Ratul aka Grey Jaw Ripper, is a year older, and dressed to look the gangsta’ part—loose trousers and tee, long silver chain and pea cap over bandana. He has been rapping for three years, and admits he cares for little else. “We’re not considered very cool, though,” he says. “People in Shillong are mostly into death metal or rock. No one gives a damn about underground rap.” Underground rap, Andrew explains, is unlike the commercial hip-hop stuff that revolves mostly around love, sex and luxury goods. “We sing about life, and politics. And that’s another reason why the youth here don’t think we’re cool. They find politics boring.”

In a place still haunted by the turbulence of the past—all through the 1970s and the following three decades, Shillong saw violent ethnic conflicts, curfews and riots—there is a surprising, and disappointing, lack of widespread political interest or ideological passion. Across age groups, the focus seems to be not on the famously nefarious ways of a massively corrupt state government, but mostly (as with everywhere else?) on the relentless pursuit of the good life. Shillong’s quiet, winding roads throb with anarchic traffic, and are flanked by endless high-rise buildings in mid-construction. Old Assam-style houses in many neighbourhoods are being torn down to make way for soulless apartment blocks. It is a town wracked by colic change, and the voices of dissent and questioning that such an atmosphere must inevitably nurture, spring from a most unusual, yet not unlikely, corner—rap music.

So far, Shillong’s musical legacy hasn’t extended beyond being vastly derivative—comprising artistes doing covers and generic big city pub-favourites—and its status as ‘music capital’ of the country can only be viewed as flawed and misconstrued. While music as entertainment has its obvious enjoyments, it is music that is achingly empty of context, with lyrics and sounds that derive not the remotest inspiration from a particular time and place. Admittedly, a few have tried and succeeded—The Ceremony, with their brilliant (and only) album, Scary Truth, in the mid-1990s, who lost two of their young band members in a drowning accident, and Snow White, an 80s-style rock group who sing beautiful, allegorical songs in Khasi, but are limited by language in their audience and reach.

Lately, however, a faint, yet obstinate tremor is emerging from Shillong’s darkened alleyways and makeshift rehearsal rooms, a revolution cupped in the hands of youngsters inspired by sounds born decades ago in America’s rough and troubled urban dwellings.

“We sing about what we see around us,” explains Ratul, “about how difficult and stressful life can be here.” Their songs, produced entirely on their own with “Adobe Audition for recording and mixing, a Rs 200 mic with headphones, Fruity Loops Studio for production, a PC and, not to forget, mad love for music”, are heavy on political commentary both local and universal. Re Introduction, for example, references the current debate on uranium mining in Meghalaya (an activity that will destroy swathes of countryside, while also throwing up immense safety and health issues for workers and inhabitants of surrounding villages): ‘I clawed open Domiasiat/extract uranium with my bare hands/Yellow Cakes be burnin/yeah, I’m screamin like a mad man’.

And Political Love is a sharply caustic ode to corrupt politicians: ‘See I’m tired of the system/we never should have trust ‘em/You lyin’ in our face/tryin’ to steal our birthplace…U hesitate investing if there ain’t no gain/We try to fight against it, u tie us in chains…U play a dirty game/ u claim to bring change/But u still the same/Like the one before u/none of ur speeches ain’t true/Like eroded rural roads always taken as a joke/Folks! The truth is in the spotlight/More than one crore u wasted on air flights.’ Like they say, the music is the message.

As we walk towards Laitumkhrah’s main bazaar, we meet a host of other rappers: Banphira Lamurong aka Lil’ Saint, Shillong’s (the country’s?) only Christian rapper who sings about Jesus, Bankerlang Synrem aka Ebonix, a member of CSP, and Gordon YungSouth, from the band Black Scarf (a reference to the cloth placed over a prisoner’s head before execution). The discussion turns toward religion, and how they feel they cannot sing freely about things like faith and doubt in a town locked within the grip of hard-core Christian morality and norms. “There’s no freedom of speech when it comes to the Church,” says Andrew, “We cannot question anything. It’s a ‘for us or against us’ scenario.” Gordon, a tall Mizo with quiet grace, and, as I find out later, an exquisite sense of musical beat and rhythm, explains how rap is viewed as violent, gangster music about guns and drugs. “People have this misconception… It’s like, if you sing rap, you can’t join the choir.”

On the other side of town, within the mainly Khasi neighbourhood of Mawkhar, the six members of Khasi BloodZ meet for rehearsal. They’re young—the eldest among them no more than 20—and committed enough to have a self-titled album (rated R) releasing later this month. Lamonte Pakyntein aka D-Mon, Donbok Kharkongor aka D-Bok, David Hynniewta aka Davy, Ritik Malngiang aka Big Ri, Jason Carter Kharchandy aka JCL and Pynbeitlang Nialang aka Pyn-B are childhood locality friends. “We’re from the West side,” they reiterate in many of their songs, and living in this part of Shillong gives them a hardened, gritty sensibility, different from that of the others I met at Laitumkhrah. They too sing about life as they see it, about what it means to be ‘Khasi’, and one of their songs titled Ladies of Shillong addresses what they feel is the blatant hypocrisy of the Khasi matrilineal system. “It was inspired by something really bad that happened to a friend of mine who is a girl,” says Lamonte, “and also by my own family and how my father ill-treated my mother. We [Khasis] say we respect women, but there are so many cases where that’s not true.” Their music, generously peppered with local slang and expletives, is smooth and playful, with chilled-out arrangements and crisp, well-layered sounds. Their hang-out joint is a small gated row of shops outside Ritik’s house. “This is where we get our stories from,” he says, “the kind of characters we meet here in the evenings. They’re drunks, wackos, weirdos, but they’re all interesting people.”

The one gripe in common with all these rappers is, to no surprise, the lack of support and a platform for their art. “We barely get any gigs,” says Andrew, and the few venues so far have included the RTI Convention and Illuminations, a charity concert for the blind. “There’s a bigger audience outside Shillong, in Mumbai and Delhi mainly, but there’s no way we can afford to travel on our own.” What has helped greatly is internet accessibility, with most of the artistes putting up their music online on Reverbnation and Facebook. They’re also looking for a basement where they can hang out, compose, rehearse. Metaphorically, it is also a search for a subcultural, alternative space nurtured alongside the mainstream.

Behind Laitumkhrah’s main bazaar, near a shadowy car park, CPS performs at an impromptu ‘session’ aided with beats from a tiny cellphone; in Mawkhar, Khasi BloodZ rap in Ritik’s room, next to a rumpled bed and clothes stand. Around the city, others do the same. Sing back in anger. Throw forth questions. Draw from the world. Put the street into poetry, and, finally, Shillong into their music.