SH Raza: Back to the Bindu 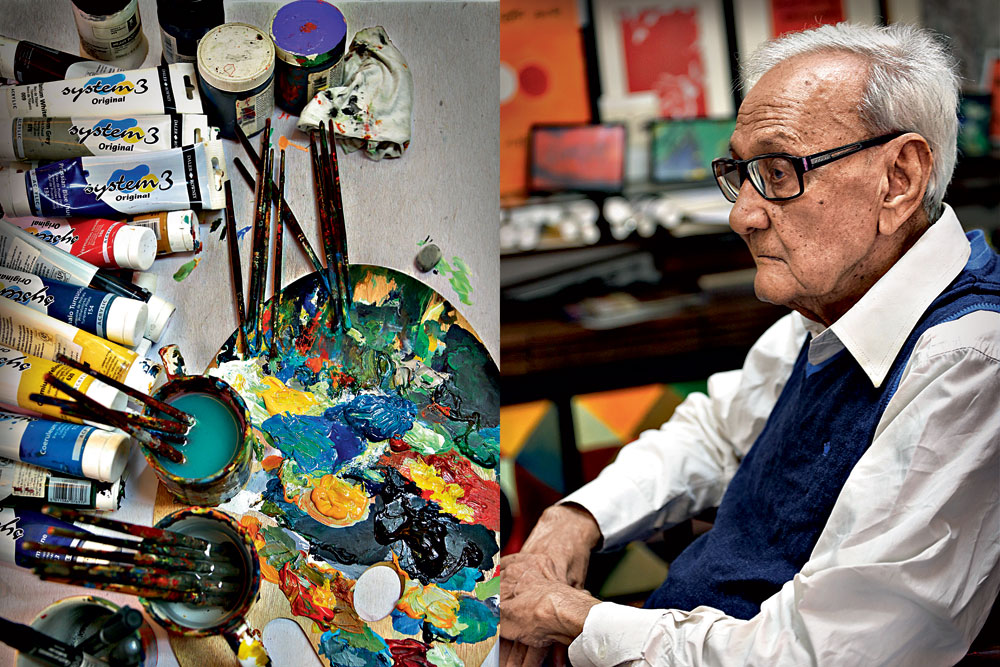 SH RAZA IS most commonly associated with the Bindu, a solitary black cosmic circle once described by the man himself as “the seed of all energy and source of all life”. SH Raza: Traversing Terrains, a major new exhibition on the legendary artist that will run through October in Mumbai, does its best to convey otherwise. “Without shattering the importance of the Bindu, we want to correct people’s understanding of how Raza arrived at the Bindu, what the Bindu is in the course of his own art history, and where it came from,” says Ashvin E Rajagopalan, a co-curator of the show. Neither a full-dress retrospective nor too marginal to be ignored, Traversing Terrains packs in just enough of Raza’s works from his early to later years to give visitors a broad sweep of the late artist’s place in the pantheon of Indian art. Hauntingly, the show serves as a timely tribute to the artist who died this very month two years ago. A founding member of the Bombay Progressive Artists’ Group (PAG) that included FN Souza, MF Husain, VS Gaitonde, Krishen Khanna, Tyeb Mehta and Akbar Padamsee, Raza left India for Paris in the 1950s and returned to his homeland only 60 years later. Though he was deeply attached to the medieval French town of Gorbio, where he had lived for much of his life until the death of his wife and fellow artist Janine Mongillat, his last wish was to be buried in his birthplace Mandla, Madhya Pradesh.

But as co-curator Vaishnavi Ramanathan, who along with Rajagopalan spent two years putting together Traversing Terrains, says, “Bombay was a catalyst for his entire French journey.” Among his earliest-known paintings, the small- sized Bombay watercolours included in this exhibition are a testament to Raza’s keen appreciation of colour from the very beginning of his career. Painted in 1945, an untitled city street scene depicts Bombay as a bustling melting pot even back then. As a student at Sir JJ School of Art, Raza was said to be fond of walking around South Bombay neighbourhoods in search of subject matter. Krishen Khanna, then a banker at Grindlays Bank and his future friend and peer at the PAG, recalls first spotting Raza “sitting in a corner of a street, trying to paint pictures of buildings”.

Never a figurative painter, even his earliest of paintings on display prove his inclination towards landscape. In the Bombay street scenes that he painted with such expressionistic fervour, the figures are reduced to blobs of paint and buildings are blocks of geometry. Rajagopalan says that it would be unfair to evaluate Raza’s early works critically. Call them an apprentice’s first steps, but they are important for people to see, as they are early indicators of his tendency towards abstraction. It is as if even as a young artist he knew that essence was a quality to be aspired to in a work of art. “In these watercolours, he doesn’t go into details. You can see that he was already thinking in form and colour than in figure,” Rajagopalan explains. “He worked with a lot of spontaneity and a furious pace,” Ramanathan adds. “As he captured Bombay, there was a certain thirst in the artist—this young man coming from a small village in Madhya Pradesh and his burst of excitement and first taste of freedom in a big city. These paintings express a lot of restlessness and energy and the twists and turns he took in exploring the city to make new connections.” Records suggest that Raza lived in Bombay between 1943 and 1950 before his departure for Paris, and nobody knew exactly when the prodigal son would return. Finding Bombay ‘very inspiring’, Raza wrote in his autobiography: ‘These seven years of my life and work were a sort of awakening, a realization of the real values involved in painting. The idea of nature, the impact of nature from childhood, was an important element. But in Bombay I realized that a painter should know his language as a writer should know the vocabulary, the grammar and the meaning of words.’ Bombay was a hive of activity when a 21-year-old Raza arrived from Nagpur. Thanks to it, he enjoyed the lifelong friendship of the PAG and the patronage of Jewish émigrés like Rudi von Leyden, Walter Langhammer and Emanuel Schlesinger who were instrumental in introducing the PAG upstarts to European modern art.

THE 1950s WERE an interesting time both in historical terms and personally for Raza. He stayed at a printing shop and explored the city. His interactions with the PAG—which would discuss the Communist Manifesto—fired his imagination. In such a politically charged climate, the PAG, while never a very political group, shared a common approach towards Indian painting, a refreshingly modern outlook. The Bengali art tradition was strong at the time, and in some ways, the PAG was a reaction against staid and old ways. Like his contemporaries, Raza was a man of vision. But hardly did the bright lights of the PAG know that their revolution would pave the way for modern Indian art.

Many artists of the PAG eventually left Bombay in search of greener creative pastures, although they remained thick friends through a regular exchange of letters and paintings. Souza went to London, for example, while Ram Kumar, Akbar Padamsee and Raza found solace in Paris.

Krishen Khanna says, “My big interest was poetry and Raza was impressed with the fact that I knew a lot about poetry, poets and the likes. Despite being from different backgrounds, we connected at a deeper level. He came from the Hindi way of life while my training was more in English, Persian and Urdu. He could recite shlokas. I couldn’t. I said, ‘I can give you shlokas in Persian.’ In fact, when his scholarship ran out in Paris, he gave lessons in Hindi for survival.”

“What was construction in a painting? I never knew” – SH Raza in response to Henri Cartier-Bresson’s observation about his paintings being good but lacking ‘construction’

Traversing Terrains also digs out a 1944 watercolour from Banaras that the artist painted on his travels across India. It is worth nothing that at one point both Ram Kumar and MF Husain were fascinated by the spiritual charms of Banaras, and while Husain chose to return in a week, Ram Kumar, who passed away this April at 94, made the holy city his muse. The result is a stunning body of Banaras landscapes that Kumar produced till the very end of his life. Are Raza and Kumar kindred spirits, and if so, what shape would Raza’s trajectory have taken if he had stayed back in India? “Both had spiritual aspects to their landscapes,” replies Ramanathan. “Their temperament and attitude to art was the same. In terms of their artistic direction, I’d say, they headed in different ways. That was the beauty of the PAG. Every one of them developed their own trajectory.”

IN KASHMIR IN the 1940s, Raza was said to have met the legendary French photographer Henri Cartier-Bresson who, though impressed by the young artist’s work, advised him to study Paul Cézanne. “‘Raza, your paintings are good but they lack construction,’ he said. ‘A painting is like a house. Without a solid foundation, it will fall.’ It was so puzzling! What was construction in a painting? I never knew,” Raza had once remarked. In 1950, Raza left for Paris to study the French masters like Cézanne and other Post-Impressionists. For those keen to understand his Parisian odyssey, Traversing Terrains has displayed a handful of key works from the early Paris period. Rendered in thick impasto, a cross between Van Gogh and Souza, Eglise et Calvaire Breton finds Raza drawn towards Parisian landscapes much the same way as Bombay’s. “He had done eight-ten paintings of a particular church on the outskirts of Paris. It’s a highly Gothic church and looks somewhat like [Chhatrapati Shivaji Terminus],” Rajagopalan surmises.

There is no disputing that it was nostalgia that triggered Raza’s most famous creation. The Bindu emerged from the memory of his schoolteacher in Madhya Pradesh drawing a point on the wall for the wandering young mind to concentrate. A nod to Hindu philosophy, the deep well from which Raza has drawn generously, the Bindu was a turning point for him as an artist. Metaphorically, the Bindu awakened his ‘third eye’. Incidentally, the interpretation of the Bindu differs depending on whom you ask. While Rajagopalan describes it as a “void”, the signature dot could just as well symbolise the cosmos, a centre of all creation, or the sun itself. The Bindu motif can also signify the emptiness of life, and at the same time, the eternal cycle of continuity.

Whatever the interpretation, Raza always imagined the Bindu as black, refashioning the five Vedic elements (earth, sky, water, air and fire) as primary colours. “For him,” says Rajagopalan, “the land is always brown, water blue and the sun is bright red or yellow.” Few modern artists have explored colour as tirelessly as Raza did. “His entire business was colour. The Bindu gave him the excuse for space, colour and geometry, and the whole thing was a manipulation of space,” Khanna argues. “He knew the colour properties so well—the range and tonalities of each colour and how they would flow into one another. It’s a spiritual and experiential thing and you spend an entire lifetime trying to find that out. I can’t think of any other Indian painter who had such a wide colour philosophy.”

The other interesting work at the exhibition is a 1984 painting that the curators claim as the first Bindu to be titled as such by the artist. Rajagopalan invites visitors to pay close attention to Raza’s titles, which are often self-revelatory. “Everything he has done so far, we now know is associated with land and landscape. He literally titles everything that way. We have works called Punjab, Rajasthan, La Terre (earth), Banaras and Saawan (seasons).” After discovering the Bindu, as poet and close friend Ashok Vajpeyi once said, “From landscape, Raza turned to nature itself.”

The impact of Rajput miniatures on Raza’s art is apparent in his paintings of the 1960s onwards. The borders around the canvas, careful division of space and the multiple perspectives of storytelling reveal a clear affinity for miniature paintings and Indian scriptures. “Settled in France, he was reading up a lot on ancient Indian culture. Away from India, he was probably more connected to India than he ever was,” Rajagopalan contends.

As he comes under the spell of American abstractionists like Frank Stella and Mark Rothko around the 1970s, his canvases evolved into flat planes of colour. Out goes the thick impasto and oil as acrylic becomes his sole preoccupation. “Acrylic offered him transparency and fluidity. It was also quicker to work with. Oil is more romantic, in the sense that when he left that impasto style, he also let go of the medium itself,” explains Rajagopalan.

The late-period acrylic Surya Namaskar (1993) merges all of the artist’s Hindu elements to create a memorable Raza moment. Summing up, Rajagopalan says that Raza’s work is at the intersection of poetry and spirituality. In Ashok Vajpeyi’s telling, “Raza’s pictures are colour-creations and colour-memories. They overwhelm without any self-assertion and have the sacredness of prayer and intensity of a scream.” Unlike his contemporaries, Raza never once wavered in his belief of painting as a spiritual experience. From landscape to nature, the modern master turned to the eternal itself, firmly committed to finding spiritual sustenance both in work and life.