Sax and the City

Bombay in the Jazz age 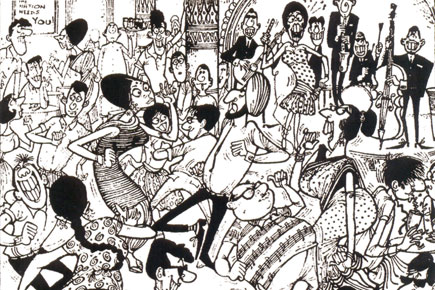 Bombay in the Jazz age


Taj Mahal Foxtrot: The Story of Bombay’s Jazz Age by Naresh Fernandes does what all good books do—provide insights into a city and its trends. The period from 1935 to 1965 was Bombay’s Jazz Age. This was also an important time in other ways. It spanned the home stretch of India’s independence struggle (it’s Nehru by a nose) and its first couple of decades of independence. Major things happened in politics, industry, architecture and culture (“a golden period” as your father told you ad nauseam). The book thus gives us a sense of a Bombay coming into its own.

Jazz was poor man’s music from New Orleans. In India, it was the sahib’s music, initially at least. And yet, it was sometimes the background score to landmark moments in Indian and Bombay history. For example, it was jazz that was playing in the Taj Ballroom the night of 14 August 1947. At midnight, when India became a free country, the bands, led by Micky Correa and Chic Chocolate, played Jana Gana Mana.

Also, jazz did not remain a pastime of the elite for long. Bollywood soon incorporated it in its music, taking the genre to the masses. Among the early birds to see the foot-tapping potential of jazz were actor Bhagwan and composer C Ramchandra. In 1951, the stocky Bhagwan, popular for his minimalist yet rhythmic dance steps, wrote, produced, directed and starred in Albela. Ramchandra composed Shola jo Bhadke, Dil Mera Dhadke. Song and film both became hits. Chic Chocolate even played a cameo in the film. Fernandes says, “I was fascinated by how this music, which was born in the ghettos of New Orleans, became the music of the elite in Asia, and quickly went back to the streets through film music.”

A majority of the visiting musicians would be Black. But they were exempt from prevailing class and race biases and had a merry time in the city. “They faced worse discrimination in the US,” Fernandes says. “In Bombay, on the other hand, they’d be hosted in style by the Taj, with food and a retinue of servants. When Teddy Weatherford, a Black musician, was asked how Colonial Bombay treated them, he replied, ‘They treat us White folk just fine’.”

Girlfriends were not in short supply either, especially from the Anglo-Indian community. Leon Abbey, who brought the first ‘all-Negro’ band to Bombay in 1935, lived up to the musical sex symbol stereotype—flashy clothes, big car, female satellites all around. The book quotes a newspaper account by Ali Rajabally, who reported on Bombay jazz in the 1930s and 1940s: ‘[Abbey] would be foppishly dressed—China silk suit, boski shirt, white buckskin shoes. Silver tie, fuzzy hair glistening with Anzora. At the day’s end you would see him and his bevy majestically gliding down Queen’s Road in the direction of the Taj in his huge silver hued Isotta Fraschini with its hood down.’

While visiting musicians looked forward to Bombay’s two-legged creatures, the four-legged ones caused some unease. Trumpeteer Bill Coleman wrote in his autobiography, ‘One thing I had a hard time getting used to was lizards. They were everywhere, even in the best hotels and houses.’

The book busts the myth that everything was rosy in the past. The rich-poor divide existed even then, as glaring as now. Journalist Dosoo Karaka wrote about the contrast after attending a Leon Abbey show at the Taj: ‘Outside, the world is not so warm; outside, it is moist and sticky; outside the realisation—homeless loiterers of the night, beggar women with half-eaten breasts, poverty on the pavements. It makes me shudder.’

We should be thankful to the book for alerting us to this specimen called Karaka, no longer in this world, unfortunately. Passages from his writings, kinetic and literary, provide a spark to the book. And Fernandes tells us that the man was as interesting as his penmanship. “He was a fascinating fellow to rediscover,” Fernandes says. “He was the editor of a paper called Current. It was a rival to Rusi Karanjia’s Blitz. But it was an anti-Nehru, rightwing tabloid. Dosoo Karaka had started writing books in a way I didn’t realise Indians wrote books. He went to Oxford, where he became the first Indian president of the Oxford Union. He wrote memoirs and social histories. He wrote a critique of Nehru called Nehru, the Lotus Eater of Kashmir. He wrote a book on Gandhi, Morarji Desai and Shivaji. He wrote one of the first Bombay novels, called There Lay the City. He covered World War II, and amid various activities, took trips to Paris to listen to jazz. Lastly, he wondered if he could kiss girls in Bombay without having to marry them.”

In sum, Fernandes says that Bombay of the Jazz Age was a city that was curious, growing in confidence and at least aspiring to be inclusive. “Yes, it was a rarefied city and the poor have never lived well in Bombay. But the goal of the city was to be inclusive. Now, there is a disgusting building coming up at the end of my street with a teaser that says, ‘Are you affluent enough to live here?’.”