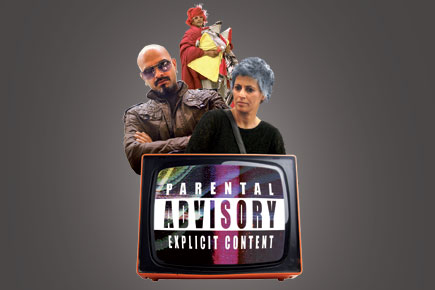 
Sapna Bhavnani, the celebrity hairstylist who was recently a contestant on Bigg Boss 6, doesn’t think she was ever rude on the show. “You are the first person calling me that,” she says, “everyone else said I was telling the truth.” She once told Navjot Singh Sidhu, another contestant, that “he was dead” to her, but says that doesn’t count. “When I told Sidhuji that, I was playing the role of a terrorist. Have you seen a polite terrorist? I didn’t care if someone felt bad, I was there to tell the truth. I told Sidhuji later that I didn’t even know why I apologised to him. I never did anything wrong.”

Her temperament has now made her a household name in India. But someone who became even more famous for his rudeness, which often bordered on the mentally unhinged, was Imam Siddiqui, a relatively obscure fashion designer. Sapna is vocal about her support for him. “The show needed Imam, because everyone else was just pretending. He made them show their real character. Niketan (a model who was also in the show), who pretended to be all calm, almost hit him. And don’t tell me he forced you to hit him. You should be even more calm when life is not going right, right? Imam was important for the show,” she says.

There have been many Imams on reality TV ever since the concept started in India. Every show has at least one person who is abrasive and ends up becoming more famous than the polite others. On Bigg Boss, some of these contestants include Dolly Bindra, Pooja Mishra, Ashmit Patel and Sky (aka Akashdeep Sehgal). There are also shows like MTV Roadies, which have made a virtue of bad behaviour. A cat fight is never discouraged and using expletives is embedded in the format, thanks to the two rude hosts. There is also Splitsvilla, where the girls fight for the boys and bitchiness is the main draw. Then there was Survivor, which was less about fighting and more about the tasks, but still had quite a few run-ins. Even dance-and-song competitions rely on an occasional spat—like the one between Atif Aslam and Asha Bhonsle on Sur Kshetra. Rudeness has made stars of people we never knew.

Rude people never win the show, but they get the TRPs, which ensures that they get most of the screen time. Try and remember the previous year’s contestants and chances are that you will only remember the ones who screamed the loudest. Niret Alva of Miditech, who is the brain behind Survivor India, says the show wasn’t signed on for a second season as there was just not enough masala. “It was only liked by the elite, not the masses. Reality television now offers crazier and crazier people. It’s aimed at the least common denominator. The triggers are scripted, but not the reactions; and so, getting the right kind of people is important. These shows are marketing tools for TV channels.” Survivor India, in fact, had its own resident rude man. Michael Durairaj was a scientist who slammed people and made no qualms about it. He made others cry and sometimes broke down himself. He says that eventually, the image paid off, but it was not really him. “In those surroundings, where you are not even getting enough to eat, you get irritated,” he says, “Later, that image worked, so then I was projected like that. Maybe I should have just been myself, but I panicked and became like that. They manufacture a reality that they think sells. Many fans see me and get angry. I had no clue what reality shows were, but next time I will be more careful.”

Ashmit Patel, who was also branded rude, had famous fights with Dolly Bindra on Bigg Boss. He says he was standing up for the women of the house, who were being harassed by Dolly. “Shows need conflict and some situations are created where you behave a certain way. But I was just helping out the ladies. I reacted to Dolly, that’s all.” Ashmit didn’t win the show, but he did go on to host another one, thanks to all the screen time he got.

Raghu Ram, the brain behind Roadies, probably owes his career to being rude. He says he is not surprised when people come up to him on the street and ask him to slap them. He is almost a cult figure among teenagers and his legend rests on rebuking and abusing contestants. “You have to get your casting right so that there will be conflict. So you cast a homophobe and a homosexual. We don’t coach people to behave in a certain way; it just happens. When everyone’s thought process is different, they will fight. We tell our contestants not to hit or abuse, but we do create situations where people will react. We don’t need to pay stars to act this way, we just select real-life bitchy people. Auditions are also like that, where we get people to react.” He then tells us to get our heads checked if we are watching Bigg Boss.