The director of the British Museum managed to draw 18 million people away from their tellies, enticing them back to the radio. Here’s how 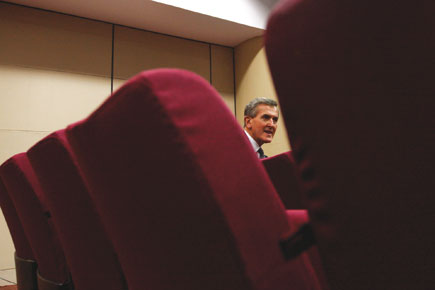 The director of the British Museum managed to draw 18 million people away from their tellies, enticing them back to the radio. Here’s how


Just when you thought radio was dead, Neil MacGregor, director of the British Museum, got 18 million listeners around the globe to tune into a BBC radio series. Broadcast from January to October 2010, A History of the World in 100 Objects, anchored by MacGregor, reconstructs two million years of our human past, featuring everything from flint to credit cards. During his visit to Delhi, Pramila N Phatarphekar spoke to ‘Saint Neil’ about radio, museums and objects that are fading from our lives.

Q The Guardian has dubbed your radio series a broadcasting phenomenon. Your thoughts on the BBC’s Hindi World Service going off air in India?

A This is very sad and regrettable. I really hope they will reverse this decision. India and Britain have linkages that go back centuries.

Q The British Museum has over 8 million objects. From these, how did you choose 100 that would reveal human history?

A We think of the British Museum as a library. We wanted to choose objects with real stories, whose history began after their making.

A The Rosetta Stone. No one knew what impact it would have at the time of its making in 196 BC. But consider its three layers of history. The first, a statement about tax exemptions under the Greek kings in Alexandria. The second is the history of empires competing in Egypt, of the French conquering this land in 1798 and trying to cut off the British route to India. Finally, this stone’s arrival at the British Museum led to the most famous cracking of hieroglyphics that had baffled the world.

Q In Egypt, even as you speak…

A Whoever controls Egypt is of greatest importance to the world. Every country has to decide on how its central power will speak to its citizens. We see this in the Rosetta. The Ashoka Pillar belongs to the same period. The inscriptions reject authoritarian rule and describe Ashoka’s duty to the people. At the same time, Roman Emperor Augustus erects statues of himself to demonstrate imperial power. The Ashokan tradition is still present in Indian politics. Gandhi and Nehru always referred to Ashoka. Nicolae Ceausescu belongs to the Augustus tradition.

Q In an internet and TV era, what made 18 million people tune into a radio series about unseen objects?

A There’s such a difference between looking and listening. As you listen, you imagine. And this makes you grasp an object in a personal way. You make it yours. You are learning from the ear.

Q When you invited people to contribute objects online, did you expect citizen museology would be a runaway success?

We were surprised and delighted to see so many people respond. Almost every family was discovering a world museum right around them.

Q The Archaeological Survey of India has called for the restitution of the Kohinoor and other Indian objects in Britain’s possession. What is the status of these objects?

A Nothing has been communicated to us formally as yet.

Q What is the future of museums?

A We have to take on a more political role, enlarge perceptions. The history we know is of a world gone 20 years ago. This March, we will be showing Afghan treasures. A museum is a secular public space. The purpose of the British Museum is to make sense of the world as it is now. We are glad that Amartya Sen is our trustee. His vision of world culture is singular. He does not suffix world culture with an ‘s’.