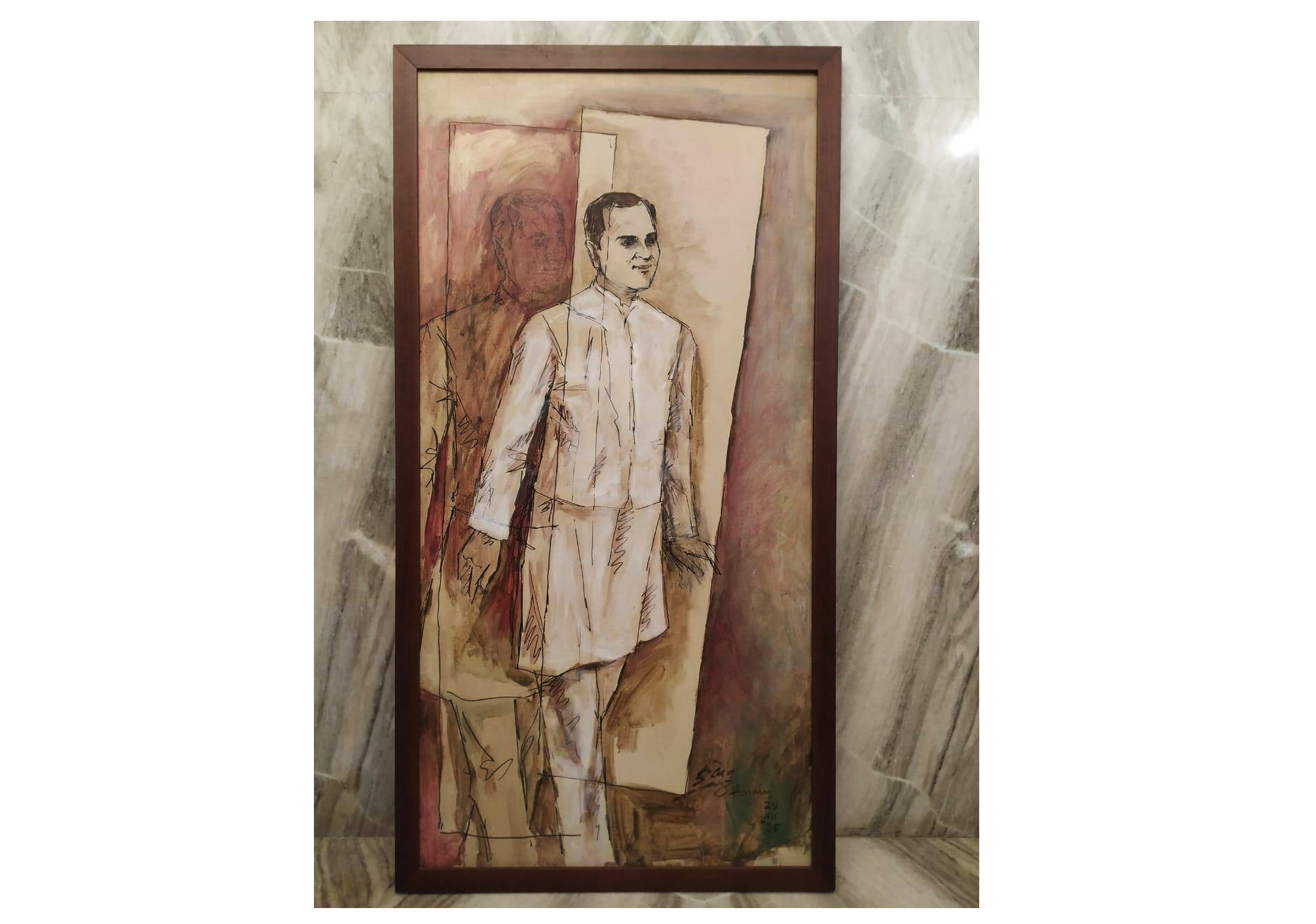 There is something about disgraced Indian businessmen and their art collections. Just ask Nirav Modi and Rana Kapoor. Modi’s portfolio boasted of 68 paintings, including works by masters like VS Gaitonde and Raja Ravi Varma, amongst others. The lot was eventually auctioned off by Saffronart. Kapoor’s art portfolio is modest in comparison, a reported 44 paintings, but just one of these has been enough to cause a furore. An MF Hussain creation, it is not the painting per se, a portrait of the late Prime Minister Rajiv Gandhi that is the subject of scrutiny but rather how it ended up in Kapoor’s possession.

“Thank you for purchasing the portrait of my father…painted by Shri MF Hussain which was presented to him in 1985,” states a letter reportedly written by Priyanka Gandhi to Kapoor and dated June 4th, 2010. Kapoor reportedly paid Rs 2 crore for the painting, a sum Gandhi, the Congress claims, disclosed in her income-tax returns that year. The painting was reportedly gifted to Gandhi in 1985 as part of the Congress party’s centenary celebrations. And therein lies the rub. The ruling party BJP claims that the painting belongs to the Congress party and Gandhi had no locus standi to sell it while Congress claims that she actually inherited it from her father. But even that defence will be unable to stand up to scrutiny.

Ministers, at both the Central and state level, are governed by an exhaustive code of conduct drawn up by the Ministry of Home Affairs. The code covers just about everything from starting private businesses to receiving awards. As far as gifts are concerned, the code of conduct forbids ministers from accepting valuable gifts from ‘close relatives’ as well as ‘any person with whom he may have official dealings.’ Gifts received when travelling out of the country, if less than Rs 5,000 in value, can be retained by the individual. If the value of the gift is more than Rs 5,000, it goes into the Toshakhana (treasure house) which comes under the Ministry of

External Affairs. So whether or not Rajiv Gandhi, who was the Prime Minister in 1985, when presented with the painting, was its rightful owner, remains a grey area.

This is not the first time that gifts received by politicians, while in an official position, have landed them in trouble. Pratibha Patil, the former President of the country, in fact was left red-faced when a right to information (RTI) petition revealed in 2012 that she had taken nearly 150 gifts, received in her capacity as President, to her hometown in Amravati. The RTI response was issued in September of that year while Patil’s tenure had ended in July. The gifts, which included a stone box gifted by the then US President and candle set from 10 Downing Street, were out on display in a museum run by an NGO which incidentally had connections with Patil’s family. The gifts were loaned to the NGO as per an MoU signed between Rashtrapati Bhavan and the NGO, it was later revealed. However, the Pranab Mukherjee administration did insist on their return. This finally happened in December, 2013. It wasn’t the first time though that gifts received by a President had been put up on display, though the practice usually was reserved for Government institutions.

The giving and receiving of gifts at a diplomatic level is not just a simple matter of exchanging pleasantries. From the times that Tribal chieftains exchanged herds of cattle, fine cloth to heads of states today, diplomatic gift giving is meant to express expectation of where the two countries want the relationship to go as well as an expression of where it stands currently. Most leaders choose to give gifts that showcase the best of their country though an ideal diplomatic gift would be something that hints at a shared history between the two nations whose leaders are meeting. Prime Minister Modi has in the past tweeted about the gifts he has carried for leaders when travelling to their country. For instance, he presented Israeli PM Benjamin Netanyahu a replica of two sets of copper plates which are regarded as sacred in the Indian-Jewish tradition. Former US President Barack Obama got a recording of a 1959 speech made by Martin Luther King. In 2016, when the PM travelled to Saudi Arabia, he gave the King a gold-plated replica of the Cheraman Juma Masjid, widely believed to be the oldest mosque in India.

All the gifts that are received by the Prime Minister as well as other ministers and even bureaucrats are routinely declared by the MEA in a disclosure of gifts list hosted on the ministry’s website. The entries for November and December of 2019 show that the Prime Minister received ‘one tea cum dinner set’, which is valued at Rs 1,50,000 and has been deposited with the toshakhana. From expensive watches to liquor bottles to carpets, sarees, decorative items, nearly everything makes an appearance on the disclosure list which lists the name of the minister who has received them and its estimated value.

There has been a tradition of holding an auction of the toshakhana items from time to time but till the NDA was voted to power in 2014, this practice was on hold. In 2015, an RTI revealed that more than 1,400 gifts were lying in the toshakhana, some for over 30 years. Proposals to conduct an auction had been mooted several times over the years but none came to fruition. But two auctions have been held since then; one in 2015, and another in 2019. More than 1,500 gifts which were received by the Prime Minister were put on display at the National Gallery of Modern Art (NGMA) in January last year where the auction was conducted for two days before moving online. The starting range for the auction was Rs 2,000 with a reported cap of Rs 40,000. The proceeds from the sale went to Namami Gange—the National Mission for Clean Ganga (NMCG) project. Interestingly, while this auction as well as the one in 2015 were open to the public, the last toshakhana auction (in 1983) was a closed-door affair and open only to Central Government officials, according to a 2015 news report in Hindustan Times. The 2015 auction was the one in which the Prime Minister had put his monogrammed suit that he wore when the then US President Barack Obama had come on an official visit.

So next time an ambitious businessman wants to curry favour with political parties and buy what was essentially a gift, he would do well to perhaps wait for an official auction.