Propaganda on a Screen Near You

Entertainment in Tamil Nadu is almost entirely motivated by politics, and the DMK is nowhere near loosening its grip on audiences. 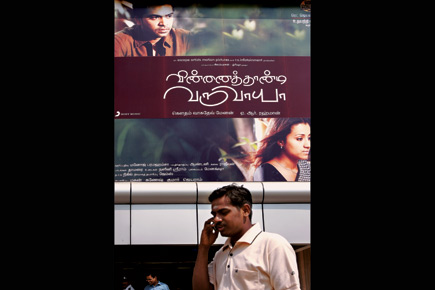 Entertainment in Tamil Nadu is motivated by politics, and the DMK is not loosening its grip on audiences.


Entertainment in Tamil Nadu is motivated by politics, and the DMK is not loosening its grip on audiences.

Coming as he does from the Cauvery Delta town of Tiruvarur, DMK patriarch and Tamil Nadu Chief Minister Muthuvel Karunanidhi fancies himself as a modern-day, mighty-yet-benevolent Chola ruler (and is often flattered by assorted celebrities as one). If Raja Raja Chola built the majestic and towering Brihadeeshwara Temple in Thanjavur, now a UN heritage site, Karunanidhi’s architectural contribution is a spanking new cylindrical monstrosity of a state legislature, green compliant and all. At the peak of the Chola dynasty’s might in the first century AD, their kingdom spanned all of South India, extending up to Bengal and even Southeast Asia. Today, the empire of the Dravida Munnetra Kazhagam (DMK) is slightly short on territory, but the party never fails to remind voters that its writ runs in Delhi, and on matters of such national importance as the telecom policy.

But it’s in the sphere of arts and entertainment, and its deft usage in statecraft, much like the great Chola dynasty of ancient times, where the DMK’s enduring achievements lie. Just as it was with the empire 2,000 years ago, the Dravida party is now the purveyor and protector-in-chief of popular Tamil culture. The various branches of Karunanidhi’s extended family already have a vice-like grip on all things entertaining, and it’s only just the beginning. The family rules Tamil airwaves, a near monopoly player in the TV business, and is getting there fast with films as well. MK Stalin, the state’s deputy CM and patriarch’s heir apparent, has a 33-year-old son Udhayanidhi who turned film producer and distributor in 2008, with a production house called Red Giant Entertainment. Competitive family politics forced his first cousin and Union Fertiliser Minister MK Alagiri’s son Dayanidhi to follow as well. The result: a similar company called Cloud Nine. Two of the biggest blockbusters of recent times have come from their stable.

Dayanidhi Alagiri hit pay dirt earlier this year with Tamil Padam, a Tamil spoof (a la Om Shanti Om) of the 1970s and 1980s Kollywood films. In March this year, Udhayanidhi Stalin trumped his cousin at the turnstiles. His latest release, acclaimed director Gowtham Menon’s Vinnai Thandi Varuvaaya (VTV), is a slickly made candy-floss love story that has become the biggest Tamil hit in the last 12 months.

If it was a case of riding the gravy train for these DMK scions, film production was a matter of logical business expansion for Karunanidhi’s grand nephews, the Brothers Maran, who own the Rs 1,000 crore Sun TV Network. Their movie arm, Sun Pictures, distributed over a dozen films, and has recently landed Kollywood’s biggest catch. Sun is the producer of a top-billed Rajinikanth-Aishwarya Rai sci-fi flick being made on a budget in excess of Rs 100 crore. Not to be outdone, Red Giant will produce the next Kamal Haasan starrer.

The three banners put together have distributed and produced over 20 films in the last two years, and even old-time producers say they are fighting for survival in the state’s media and entertainment market, estimated at over Rs 3,000 crore in revenues. “Very soon, every Tamil film that comes out will be either distributed or produced by a ‘nidhi’. When they decide to produce a film, big-name directors and actors have very little choice but to sign on the dotted line, and when Cloud Nine distributes a film, the unwritten rule is that no other big banner film would be released at least for the next two-three weeks. It’s not the ideal situation for a creative industry to be in,” says a veteran filmmaker who’s worked with the legendary Sivaji Ganesan.

The added advantage that Sun Network and Stalin’s Red Giant have is the synergy their TV channels provide. Promotions of their productions are aired ad nauseam, and then there are rave reviews on TV shows as well.

“The DMK has hit upon a blockbuster of an idea that fortifies them financially to take on their political opponents, while giving them the soft power to influence the electorate’s tastes and choice. The party, or more specifically, Karunanidhi’s family effectively controls TV, films, cricket and even mainstream news media in the state,” says a veteran Chennai sociologist.While N Srinivasan, the state cricket chief, high ranking Board of Control for Cricket in India (BCCI) official and owner of the Chennai IPL team, is known to be fairly close to the ruling family, the print media, pockets of which were trenchant DMK critics not so long ago, seem to have realised the virtues of political compliance. On Stalin’s birthday in the end of February, the Ananda Vikatan group, which runs magazines and makes TV software, published an anthology of hagiographic profiles on the politician penned by leading journalists. Media barons, film stars and well-regarded editors (local and national) all hailed Stalin in an apparent contest to cast him as a posterboy of good governance.

Tamil Nadu is entertainment crazed and has close to 50 round-the-clock TV channels that broadcast programmes with political overtones. There’s political merit in owning an audio-visual medium. Even Vijaykanth, the latest in the line of actor-turned-politicians, is expected to launch his Captain TV channel later this year to take on what he dubs ‘the Goebblesian propaganda’ of the DMK through the Sun TV Network and Kalaingar TV, which Karunanidhi’s immediate family owns.

“TV is the most convenient tool for politicians across Tamil Nadu to address their respective constituencies. So they are launching channels despite the fact that competition in the field is getting tough by each passing day. The heavy financial cost of running a channel is deterring no one,” observes P Radhakrishnan of Madras Institute of Development Studies.

Besides the Sun TV Network, the ruling DMK runs Kalaingar TV, launched a few years ago to weaken the influence of the Maran brothers who had fallen out of favour with the state’s first family. There has been a patch-up since, and the two networks now work in tandem, like a ‘double-barrel’ gun, in the phrase of an advertising agency chief in Chennai. The aim is to propagate the DMK’s ideology and showcase its governance. Characters in several soaps on these channels often make glowing references to the party’s Rs 2 per kg rice scheme or get admitted to rural hospitals under the aegis of a new health insurance scheme.

Caste also has a not so insignificant role. The script for Thekkathi Ponnu, a prime-time soap on Kalaingar TV, is based on life in Thevar society, a coveted ‘vote bank’ in the deep southern districts of the state, and eulogises its martial customs. As a counterpoint perhaps, the AIADMK-owned Jaya TV’s flagship soap Enge Brahmanan, scripted by Hindutva sympathiser Cho Ramaswamy, dramatises the virtues of the Manu Shastra and Vedic Brahminism.

Ground-level control of cable TV networks, gaining which often demands strongarm tactics, completes the dominance. Sun TV controls over two-thirds of the cable market through its subsidiary Sumangali Cable Vision (SCV). Back when the relationship between Karunanidhi and the Maran brothers was strained, the DMK government started the state-run Arasu Cable Corporation (ACC) to break SCV’s monopoly. Why the state needs to run a cable business and distribute free colour TV sets may baffle most economists, but in Tamil Nadu, the political returns are clear and obvious.

On his part, Alagiri started his own Royal Cable Vision (RCV) in the Madurai region. It created headlines for the first time when it blocked out Sun TV and its associate channels in the entire Madurai region. There began the politics of blocking the channels of rivals. The PMK-aligned Makkal TV and Jaya TV still routinely accuse Sun Network of blocking their channels in different parts of the state.

If Bollywood’s ‘reality filmmaker’ Ramgopal Varma wants a new ‘gonzo’ script, he could look at the incestuous cesspool of Tamil Nadu’s entertainment politics. And depending on how well he projects his effort, he may find producers and distributors lining up to back him.