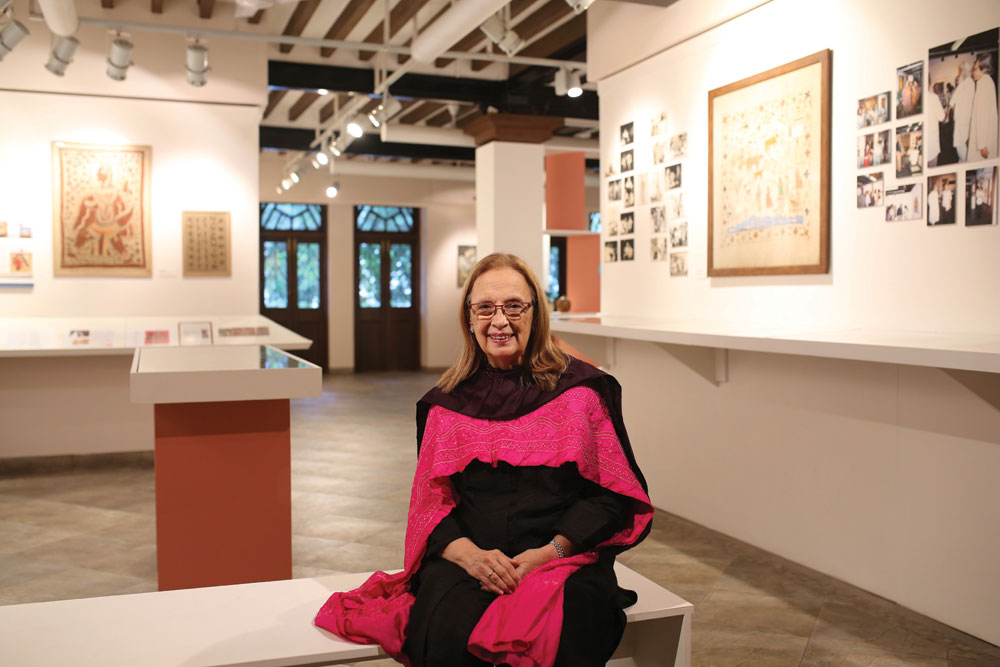 
WHEN DR PHEROZA J GODREJ STARTED the Cymroza Art Gallery in Mumbai’s tony Breach Candy in 1971, there was no buzzy art market, no record-setting auctions, many artists reverentially called “masters” today were just sparky strugglers. More importantly, there were only a handful of galleries dealing in modern art. Or any kind of art for that matter. Curator Nancy Adajania is quick to remind us, “Remember that when Pheroza founded Cymroza, it was only eight years after Kali Pundole had started the Pundole Art Gallery and Kekoo Gandhy had opened Gallery Chemould, both in 1963. In the early 1970s, these were the three private galleries in town, apart from the Taj Art Gallery at the Taj Mahal Hotel. There was, of course, the Jehangir Art Gallery, which was a public gallery. Chetana, the restaurant and bookstore, also had a space where they would host art exhibitions, and there was KH Ara’s Artists Aid Centre on Rampart Row, later known simply as the Artists Centre.” Born Pheroza Shroff, she was all of 23 at the time of Cymroza Art Gallery’s launch. Today, the gallery that styled itself as a playground “for young people” is 50 years old while Pheroza, who’s married into the Godrej clan (her husband Jamshyd Godrej is a business magnate), is 72. A leading figure in the evolution of Bombay’s art and culture scene, “she has played a number of formative and influential roles over the last 50 years as a gallerist and patron, as a collector and museum professional, as a philanthropist and policy-maker, as an art historian and curator,” highlights fellow curator Ranjit Hoskote. Despite such a wide repertoire, Pheroza is better known as a gallerist and an avid art collector. A labour of love, the Cymroza Art Gallery holds deep personal significance to Pheroza as manifested in its name. Its ‘Cy’ came from her brother Cyrus, ‘M’ from her mother Mitha, ‘Roz’ from her father Phiroze and finally, ‘A’ from her own name.


The gallery recently celebrated its golden jubilee (publicised as ‘Cymroza at 50’) with a set of three exhibitions held in different venues across Mumbai. The first one that I saw was the Ranjit Hoskote-curated Mapping the Lost Spectrum at the Pundole Art Gallery. A veritable trove from the Jamshyd & Pheroza Godrej Collection, its high point was arguably Akbar Padamsee’s Lovers series — one of them being his iconic painting from the early 1950s depicting an amorous couple in which a man is shown with his one hand tenderly placed over a woman’s breast. The collection mostly consisted of the modernist vanguards, the likes of MF Husain, Manjit Bawa, Nasreen Mohamedi, Akbar Padamsee, Krishen Khanna, Rekha Rodwittiya etcetera. Pheroza has also collected ceramics, photography and prints, once considered undervalued creative practices but they nevertheless go on to reveal her eclectic taste in art. While the Pundole show has just concluded, viewers interested in Cymroza’s journey can still visit the Chatterjee & Lal and Cymroza Art Gallery for two ongoing exhibitions (both on until October 30th) that capture the bygone era of Bombay’s cultural zeitgeist. Curated by Nancy Adajania, The Unpaved, Crusty, Earthy Road (at Chatterjee & Lal) is an ode to Nelly Sethna’s textile treasures. The Cymroza Chronicles at the Cymroza Art Gallery, on the other hand, is ground zero for Pheroza’s lore. It’s laden with archival material tracing her personal and professional odyssey as well as commemorating important milestones in the city’s cultural history. For art lovers of a certain generation, a trip to The Cymroza Chronicles would be like a stroll down the memory lane. It’s particularly true for Pheroza J Godrej, who not only saw history being made but also played a role in it.

Seated in her office in Godrej Bhavan at Fort, a short drive from the Cymroza Art Gallery, we find her in an introspective mood. “I am always looking ahead but it’s nice to reflect on what sustained you for five decades. For me, it has been nothing but passion,” she says, adding that she feels a mix of “nostalgia, happiness and fulfilment” at Cymroza’s 50-year legacy. Did having a famous surname help, I ask. “Later on in life, yes,” she replies, tersely.

“I am always looking ahead but it’s nice to reflect on what sustained you for five decades. For me, it has been nothing but passion,” says Pheroza J Godrej, founder of the Cymroza Art Gallery

Her office is filled with art. Look around and you spot Satish Gujral, Sudhir Patwardhan and Manjit Bawa while Bal Chhabda’s (founder of Gallery 59) abstract work rules the foyer. All this fabulous art, however, belies Cymroza’s humble beginnings. One of its founding missions was to encourage budding talent. “It was difficult for first-time artists to book a slot at the existing galleries because nobody wanted to bet on a newbie. It was a different era altogether. There was hardly any awareness about art. Galleries waited for their friends to show up at the opening. Artists went to other artists’ exhibitions. That was the only audience we had,” the septuagenarian says, looking back at that time. Over the decades, the gallery has backed many younger artists (Latika Katt, Jaideep Mehrotra, Madhvi Subramaniam and Kristine Michael) as well as a number of women artists. The list of women artists reads like a who’s who of modern Indian art: Arpita Singh, Gogi Saroj Pal, Arpana Caur, Rekha Rodwittiya, Jyotsna Bhatt and Ira Chaudhuri. Rodwittiya had her first solo show at Cymroza in 1985. One of the emerging artists whom the gallery patronised right after college was MF Husain’s son Owais Husain, who was Rodwittiya’s student in Baroda. “Husain was quite pleased, like any father would be but he used to joke, ‘Inko show mila, hamein nahin mila.’ We’d laugh over it,” says Pheroza. A close bond soon blossomed between them. “Husain was fearless in what he expressed through his art. That was the beauty of the painters from his generation. They knew Indian culture and mythology so well. They weren’t just painting for the sake of making a statement. They believed in what they were doing.”

EVEN THOUGH CYMROZA WAS BUILT AS A space for younger talent, its inaugural group show in 1971 was a theatre of the stalwarts. The exhibiting artists included now-familiar names such as NS Bendre, KK Hebbar, KH Ara, Jehangir Sabavala, B Prabha, Pilloo Pochkhanawala and B Vithal, among others. “We went with senior artists for our first exhibition because we needed to attract people to our new gallery,” she says, recalling personally going over to artists’ studios in order to select the works for the opening show. “Artists like Bendre, Hebbar, AA Almelkar, even Bal Thackeray. They all lived at Kala Nagar. So, one would go over to Bandra on a weekend and spend an entire afternoon there. I’d select a piece and leave it to the generosity of the artist to part with whatever he/she wanted to. I remember B Prabha had come to see the gallery as it was progressing and she said, ‘I have a lovely painting for you. Lekin itna lamba painting hai ke bik nahi sakenga. True to her word, it really covered the whole wall. And I said to myself, ‘If I put this on display what will I do with the others?’ She had put me in a conundrum.” Some artists brought their own eccentricities for a young Pheroza to grapple with. “B Vithal told me that the sculpture stands should be like a work of art as well. He offered to design them himself but you know I was really trying to get the gallery off the ground and had no time for indulgences,” she says with a laugh. As it turned out, Bendre and Ara’s popularity helped sell their works but Prabha’s large painting — “a typical two-figure Prabha canvas set against a forested backdrop” — could not find a buyer and remained unsold. “Setting up the gallery cost me so much that I couldn’t buy anything for myself. Sadly, I had to give back the painting to Prabha,” says Pheroza, who now owns a rare and disturbing painting of the Bengal famine from the same artist. “It’s in my office. I see it every day.” She mentions that she doesn’t differentiate between “an eye-catching painting and one that is difficult to understand or look at” — a motto that always has guided her purchases.

According to Ranjit Hoskote, who has known Pheroza for the last 34 years, she conceived Cymroza as “a successor to the Bhulabhai Institute, which had been a vibrant crucible of the arts during the 1950s.” He says Cymroza took forward the “Bhulabhai mandate of being open to all the arts, which is why, during the first decade of Cymroza’s activity they hosted Hindustani, Carnatic, folk and rock music concerts, poetry and play readings, screenings and lectures. It was a cultural hub rather than narrowly an art gallery.” Pheroza admits that Mumbai doesn’t have that kind of cultural exchange anymore. It seems all the art action has shifted to places like Delhi, Kochi and Baroda. She shares the cynicism of many Mumbaikars who feel the cultural spaces in the city are increasingly shrinking. Mumbai real estate is proving too expensive even for a Godrej. “It kills you,” she shrugs. “Which builder wants to give you a space for an art gallery? The BKC was reclaimed but it has become a commercial behemoth. Do you think the Chhatrapati Shivaji Maharaj Vastu Sangrahalaya (CSMVS) museum would come up in 2021? No chance! Private initiatives aren’t enough. The government needs to do something.”

“I have realised the importance of storytelling. I have learned how to apply art theories and form connections,” says Pheroza Godrej

Pheroza’s commitment towards supporting younger talent stems from the fact that she was once a promising artist herself. One of her works from 1968 on display at The Cymroza Chronicles shows a woman selling costume masks, attesting to her predominantly figurative style. She made her debut at a solo exhibition displaying her works in the precincts of the Chetana restaurant in 1970, though her first choice was the more coveted Jehangir Art Gallery across the road, which was fully booked. She tells the story of a German gentleman named Konrad who fell in love with one of her rare abstract paintings priced at a steep `200. “He was travelling through India at the time and promised to buy this work if he had any money left at the trip’s end. One day, he turned up at my house and picked up the painting. He kept his word while I didn’t budge from my asking price of ₹ 200. We became good friends later on.” Despite her initial spell of success, she couldn’t keep up with painting. Does she regret not becoming a full-time artist? “No one stopped me. Nobody said, ‘Run a gallery or paint.’ But there was just not enough time to do justice to both,” says the mother of two, who wanted to become a doctor when she was young.

For now, though, Pheroza intends to turn her gaze towards promoting what she calls high-quality curatorial pedagogy. “In the last few years, especially while working on Cymroza at 50, I have realised the importance of storytelling. I have learned how to apply art theories and form the connections in the work that there is in front of us and the history and period during which it was created. Storytelling is such a simple word to use but it’s so much more than that. I think we need to have a whole generation of art historians coming up and thinking about this.”