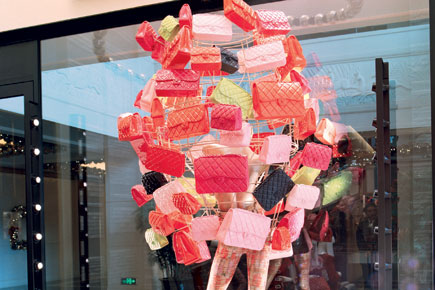 
Marc Auclert sits tucked away in a little boutique underneath the archways of rue Castiglione, a few steps from Place Vendôme and rue de la Paix, two of the most glamorous addresses in Paris and home to some of the most famous jewellers in the world: Tiffany, Cartier, Dior, Chanel, Boucheron, Chopard. Walk by his shop, and you almost miss it. Walk in, and you will enter a treasure trove of one of Paris’ best-kept secrets. Marc is also a jeweller, and he works with antiques and antiquities, be they 4th century BC beads from India, gold from Ancient Rome and Greece, Japanese ornaments from the 16th century, or baubles handed down from the Italian Renaissance, which he transforms into pieces of thoroughly modern jewellery. Unlike the big brand names just a few doors down, he does not advertise, and his pieces are unique. Anyone wearing his pieces knows that she, or sometimes he, is wearing a piece of history.

Marc’s work epitomises a concept of luxury that is trying to redefine itself in a world that is dominated by brand names as recognisable as a logo on a cereal box. “So much of what is sold as luxury today is just the product of a clever marketing campaign,” says Marc. “What is ironic is that much of the marketing message of these big brands is about selling the dream of Parisian chic, while the real chic ‘Parisienne’ no longer seeks out brand names for brand names’ sake. She wants something special, unique, not something sold in tens of thousands of copies the world over and is instantly recognisable anywhere on the globe.”

Marc is no stranger to luxury marketing. Before creating his own jewels, he worked for Chanel, De Beers and Chaumet. His years in the luxury industry have left him with the view that real luxury can only be found at the extremes of the spectrum: in the rarefied world of haute couture or some of the prêt-à-porter collections of well-established brands, or in small, almost secret labels like his that still offer a high level of customisation, rarity and sense of uniqueness. In both these places, you can find what he maintains is one of the essential components of luxury: magic.

Haans Nicholas Mott is another ‘creator’, as exponents of the luxury business like to call themselves, who believes in promoting magic. He weaves his particular brand of magic in handcrafted clothes made with the most exquisite fabrics he can find, where the seams of clothes are not only visible but the only signature he will allow on his clothes: in his rejection of logos, he is trying to create a brand that is recognisable through his craftsmanship alone. Unlike most designers, he mainly makes clothes for men, and chic Parisian businessmen are sometimes seen disappearing into the private apartments where he shows his clothes with as much stealth as when they visit their mistresses… One can imagine them wearing his suits with their subtle signature as a calling card for any fellow member of this ultra exclusive club, whose code is only perceptible to the truly initiated.

This view is echoed by Christian Blanckaert, former managing director of Hermes International and author of the book Luxury, in which he explains that ‘once a product becomes too visible, it becomes dangerous’.

That is exactly what comes to mind when one sees long queues of tourists outside the Louis Vuitton flagship store on the Champs Elysees. They are queuing up for what has become probably one of the most emblematic luxury items in the world, the Louis Vuitton handbag, with its instantly identifiable LV logo and waterproofed reinforced canvas. And for those who cannot come to Paris, the same bags sell like hot cakes in the upmarket shopping areas of Delhi, Shanghai, Sao Paolo and New York, among other cities.

Part of the popularity of these bags is undoubtedly the quality of the materials and workmanship that goes into them, and their aesthetic durability, which means that they will still look elegant after months, even years, on long dusty roads. But a significant part of their success is the outcome of the genius of Bernard Arnault, the French businessman who turned the parent company of Louis Vuitton, Louis Vuitton Moët Hennessy, into the world’s largest luxury business, with aggressive marketing and international expansion. As a result, a significant bulk of LVMH’s revenues now come from Asia: 32 per cent in 2011, not even including Japan, which makes up another 14 per cent of its 2011 revenues (as against a mere 8 per cent from France). Part of this success can be explained by the fact that LVMH sells a concept of French chic which still has the power to capture people’s imagination the world over. Ironically, this is happening just as the really chic Parisian is turning away from the crowds in his or her quest for chic.

Like the tourists queuing on the Champs Elysees, Edwina de Charette loves handbags. But, like many fashion-conscious Parisians, she no longer felt the beautiful but readily available bags selling in the luxury ‘mass market’ could offer her the kind of chic her mother and grandmother had brought her up on: bags that were unusual, custom-made and, thus, truly original. Last year, she started a small leather goods business. Her boutique, laContrie, on a side street just off the rue Saint Honoré in Paris, offers beautifully crafted bags made on the premises by artisans trained in the same Parisian school that Hermes recruits most of its workers from. Much of the leather used comes from the same supplier as Hermes’ as well, and clients can browse the boutique’s basement workshop, choosing from a multicoloured array of traditional and exotic leathers, letting their imagination run wild. “I love it when clients go for whacky colours,” says Edwina, “after all, why have a bag made to order if it looks like everybody else’s?”

Looking like everybody else, however, seems to be exactly what all those rushing to buy the same clothes in the same stores seem to be doing. Walk in to the Chanel boutique in rue Cambon in Paris, and one could be forgiven for wondering whether the Chinese have all traded their Mao Tse Tung jackets for a new uniform with the Chanel double C logo on it. Indeed, most of the customers and even salesgirls are Chinese. But here, once you get past the bustle of the masses, there still exist a few well-kept secrets—a world of rarefied luxury.

A few doors down, in Chanel’s corporate headquarters, one steps into a different world, with not a logo in sight.  The interiors are sleek and monochrome, and even the black-and-white photographs on the walls are a far cry from the glitzy advertising campaigns one commonly associates with big brand names. One of the striking features about Chanel is that in a world where brands are being floated on stock exchanges and traded by investors, it is still in private hands. This, and the artistic frenzy of the house’s creative director Karl Lagerfeld, goes some way to explain how, at the other end of the spectrum of Chanel’s mass marketing perfume and make-up drive, a Chanel dress or jacket remains one of the most coveted items a chic Parisienne can aspire to.

“Chanel still has the ability to make people dream,” explains Bruno Pavlovsky, head of fashion at Chanel. “On the one hand, we offer our traditional clients some of their wardrobe staples, such as the famous little black jacket, and on the other, we are always, always innovating. Out motto is creativity, creativity, creativity.” At the top end is Chanel’s haute couture offering, where clients have clothes custom-fitted, even tailored—within the label’s limits—to their fancies. This is perhaps the ultimate in luxury chic, where the client is able to step into a world of history and tradition, buy into the comfort of a brand their grandmothers grew up with, and still know they are stepping away from the crowds.

This service comes with a heavy price tag, however, and those who can afford it are rarer and rarer; most of them no longer come from the traditional French client base.  Interestingly enough, the emergence of clients from Asia, where the tradition of having clothes tailor made to measure is very strong, is providing a much welcome boost to haute couture.

Pavlovsky nevertheless explains that while “new markets offer a very interesting opportunity”, the house endeavours to remain loyal to its origins, selling the idea of Parisian chic. Looking at Chanel’s 2012/2013 Cruise Collection, with its references to one of the first Parisian fashion queens, Marie Antoinette, whose dressing extravagance was a catalyst for the French Revolution, this idea does indeed seem to find expression in the most creative ways. Perhaps, the fact that this first doyenne of French fashion was herself of foreign origin (she was an Austrian princess) is also a reflection of the many influences that have shaped Parisian fashion down the ages.

This is most true when a Parisienne travels abroad, and India is one of her new very best kept secrets. Ignore the long cotton scarves, sequins and bright colours that adorn every boutique in Paris this summer. It is in finding hidden tailors or Indian brands that are still unknown in France that the Parisienne revels. In her search for excellence, exclusivity and originality, she has found a new paradise in the explosion of designers on the Subcontinent, many of whose ethos is the same as that found in the traditions of old-fashioned Parisian fashion houses: innovation, proximity to the customer, and true craftsmanship. In that lies the essence of Parisian chic, not in a queue outside a large store on a rainy day.