Artist Shuvaprasanna on why it’s not yet time to paint Mamata, the lies of Buddhadeb Bhattacherjee, and managing passenger amenities for the Railways 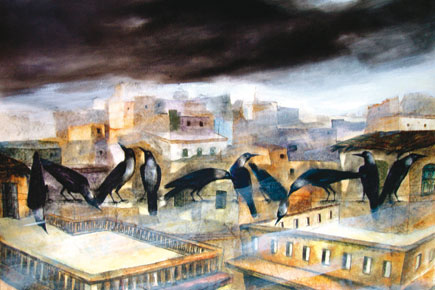 
Shuvaprasanna has been a professional artist for the past 50 years. A huge retrospective of his work is being held to mark the occasion. In recent times, the artist has been known, censured even, for his closeness to Mamata Banerjee. He typifies the kind of intellectual that Banerjee has gathered in her support, other prominent names being filmmaker Aparna Sen and  singer Suman. Weeks before a crucial election in West Bengal, he speaks of using art as a platform, the courage of Mamata, and the lessons of Singur and Nandigram.

Q A lot is spoken about your association with Mamata Banerjee. How do you think art and politics go together?

A Do you think art is something that exists in isolation? I don’t live in an ivory tower. The German author Gunter Grass was a great spokesperson of the SPD (Social Democratic Party), poet Rabindranath Tagore established a university and had direct involvement in politics and the freedom movement. In West Bengal, the political situation is terrible because the Communists have been ruling for many decades now. There’s hardly any democracy, there’s almost a kind of state-sponsored terrorism here. How can I keep quiet about it? But when I spoke out, I had no idea I would meet Mamata Banerjee in the process because I am not in politics. She is the only opposition leader who is strong. She has suffered a lot. It’s not easy to fight a powerful establishment like the Left.

Q What part of her persona appealed to you?

A Her courage. I wanted to urge people to be brave and speak out. In a democracy, you have the right to speak out. Use that right. You have one vote, Anil Ambani has one vote, a poor Adivasi has one vote, even the Prime Minister has one vote. It’s a very powerful weapon that we have. And we should utilise that optimally..

Q You’ve made portraits of both artists and politicians—MF Husain, Bengal Chief Minister Buddhadeb Bhattacharjee, Rabindranath Tagore, Jamini Roy, etcetera. But you haven’t made a portrait of Mamata Banerjee yet.

A I may paint her later but now is not the right time because it’s difficult to capture a face and personality that is still developing. Tagore’s portrait is easy because he is seen as an icon. As is the case of Husain—the most energetic, creative person [of all], and a master of marketing. And then there’s the portrait of Buddhadeb—the typical face of a person who is constantly telling lies and trying to grab power.

Q I believe you were always very vocal about politics, even during your college days.

A That’s my character. I have used my art as a platform. But I can’t do everything through art. So I feel the need to write too. I used to be a columnist and have a couple of books published already. And I give speeches whenever required.

Q What are your expectations from the Assembly election? Will you campaign?

A I must make it clear that I’m not a politician. But in a democracy, you have to take a stand at the right time. My expectations are simple. In my state, the poor and Adivasi have suffered. So whoever is in power, it is my earnest request that we think about food for the poor as well as health, education and peace.

Q Are you still heading the passenger amenities committee in West Bengal?

A Yes, I am the chairman. I told the Railways Minister that I am not the right person, but she insisted. So I agreed to head the committee without any special perks from the railways or even an honorarium. It’s a huge organisation, so I just give some advice. Implementation is not my job. But I am happy that the minister has already implemented some of my suggestions about senior citizens, the timings, fare facilities, etcetera.

Q You were also going to start a news channel at some point—what happened?

A It was one of my dreams, but I failed because I’m not a business guy. I found it a complicated process, so I left it.

Q Artist, writer and activist: how would you like to be remembered?

A First, of course, as a painter because that has been my only dream since childhood. But when I spoke out during the Nandigram and Singur episodes, some people accused me of not being a painter anymore. They accused me of being an organiser. It is my dream to be a grassroots person, but I was born in a middle-class family and have always lived in a big city, which kept me away from the grassroots. But I saw reality during the struggle in Nandigram and Singur. And that was a life-changing experience for me.

(Shuvaprasanna: Recent & Retrospective will show at Gallery Nvya and Art Indus till March 31)