Not the Typical Saas-Bahu Serial Writer

Maharashtra Election Commissioner Neela Satyanarayan has the most unusual of hobbies. 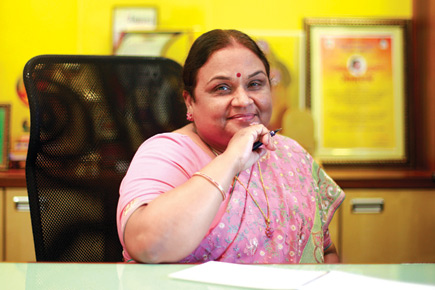 Maharashtra Election Commissioner Neela Satyanarayan has the most unusual of hobbies.


Maharashtra Election Commissioner Neela Satyanarayan has the most unusual of hobbies.

Neela Satyanarayan’s primary identity is as the first woman Election Commissioner of Maharashtra. At work, she is a stern boss who does not suffer fools. The first hint that she is not your average IAS officer comes from the light music playing in the background in her office at Mantralaya. Such things don’t happen in government offices.

Neela is also a well-known poet, lyricist and music composer. But what is really unusual about her is that she is probably the first and only Election Commissioner to be a writer of saas-bahu serials.

She has penned the script and lyrics for a Marathi TV soap called Dakshata. She also has a whole bunch of ready scripts which she will “open out” only after retirement. “As an IAS officer, I cannot write scripts that are demeaning or derogatory. My service rules do not allow it. I cannot experiment much with the script,” says Neela. According to her, it is difficult to write saas-bahu scripts because industry expectations are different from what comes out of her pen. She wants her female characters to be strong protagonists, but producers have other ideas. For the time being, she is channelling most of her efforts into writing books and lyrics. Soaps will get more attention after retirement.

Neela’s story has a sad beginning. Though she started writing lyrics when she was seven, her best work started after her child was diagnosed with Down’s Syndrome. “When I used to walk in the courtyard holding my child to my bosom, I would be composing lyrics and scripts in my head. When I got the time, I would write them down. Writing and music has always complemented my house duties and profession.”