Not a Happy Ending 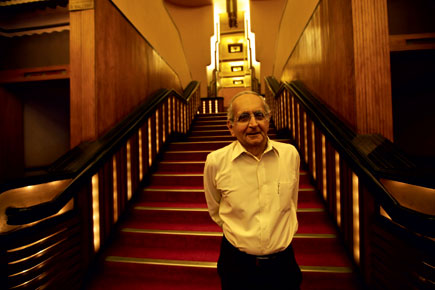 
Mumbai’s Liberty Cinema is no stranger to dark times. The theatre that was once considered one of old Bollywood’s leading showcases for new releases, stands today as one of the most admired landmarks of old Mumbai’s art-deco era. It has survived 63 years, despite a rapidly changing entertainment culture. But despite its perseverance, and the strong reputation of its architectural importance, the end might finally be near—on account of what owner Nazir Hoosein describes as “falling attendance throughout the industry” and an “unsustainable” government tax rate of 45 per cent.

Hoosein, Liberty’s 72-year-old owner, is upto the battle for the theatre’s survival. Once a professional racecar driver, and vice-president of the Fèdèration Internationale de L’Automobile (FIA), Hoosein is accustomed to tests of endurance—and maintaining a cinema that is over a half-century old certainly qualifies. He is currently looking at film festivals, jazz festivals, and other specialised events to draw people in, but time is running out, he knows.

Unlike other landmark theatres like Regal or Eros, Liberty is still beautifully maintained, freshly painted and clean, a fact in which Hoosein takes great pride. Today, he occupies the same office as his father did, a few metres away from the red seats and swirling designs of the theatre’s balcony. A colourful man and raconteur, Hoosein speaks to Open about the battle on his hands, his memories of Bollywood’s early days, and the fascinating history of one of India’s true cinematic landmarks.

Q How serious is your financial danger now?

A Very. All cinemas are in trouble [including multiplexes]. But Liberty has to be sought out, so it can’t pick up the same level of street traffic as, say, Regal. So, I want to do everything I can to keep it going for the sake of history.

Q Who or what do you blame for the situation?

A There are several factors at play. In 2005, the government awarded the now infamous tax break to multiplexes.  Essentially, what this meant was that if you wanted to open a multiplex, you could do so without paying taxes for five years. The [Cinema Owners and Exhibitors Association of India], of which I am a board member, wanted to tackle the situation politically. I thought this was futile. I viewed the [tax holiday] as an act of discrimination and felt that it ought to be tackled legally. I lost the argument to them and we lost [the battle]. Now the tax holiday has ended, and across the board too many cinemas have sprung up. Too many cinemas and not enough cinema goers.

Q How did your family wind up in the movie exhibition business?

A My grandfather was in cotton. Bombay was a major player in the cotton industry during [the early 20th century], and a lot of it ran through the Currimbhoys’ empire.  My grandfather was their chief collector, and my father, Habib Hoosein, was trained in cotton, but his heart was always in cinema. So, he started small with the idea of working his way up.

A At first, he used to screen just one film per week at the Bandra Gymkhana. (Laughs) But then, during World War II, Bombay became an allied base, you know, and demand for cinema became even higher than it already was. So, he would put up cinemas wherever the armies went. Some of these were legitimate movie theatres, and some were just makeshift tents. He would get a plot of land and then put up the facility in under a hundred days. By the end of the war, there were 45 of them.

Q What happened to those spaces?

A Communication was difficult [at that time]. And, movies are a cash business. So, with so many cinemas spread across such a wide radius, it became difficult to control the business end of things after the war.

Q Any still in existence?

A Yes, Cathay still exists. So, does Regimental [cinema].

Q How did Liberty Cinema come to be?

A Well, after Independence, spirits were high, and my father felt that India needed a state-of-the-art, top grade Hindi cinema hall. There was none—no place where Hindi cinema could be given the respect, the deluxe treatment he felt it deserved.  So, he sold all the others in pursuit of this goal.  He decided to name the cinema ‘Liberty’ in honour of Independence.

Q The architecture and design of this building have become quite famous. What was the process like?

A The original architect, MA Riddley-Abbot, an Englishman, died just as construction got underway. He was heading to London to visit home and his plane crashed.

Q How was the building completed?

A Construction was overseen by a man named JB Fernandes. A man named Namjoshi completed a lot of the interior design work, including many of the iconic touches, things that have been made famous in books [like Sharada Dwivedi’s Bombay Deco].

Q How old were you at the grand opening?

Q What do you remember of the opening night?

A I remember that there were two ribbons crossing at the centre of the screen, making it look like a giant postage stamp. And I was asked to cut one of the ribbons, along with the young daughter of one of the theatre’s investors, who cut the other. History will register that the first film was Andaz, a Mehboob Khan film that starred Raj Kapoor, Nargis and Dilip Kumar. But the night before, my father ran a private screening of a 1948 Hollywood film called The Loves of Carmen, starring Rita Hayworth. He screened it for the builders, associates and investors. The investors, naturally, were anxious to get a peek at where the money had gone. (Laughs) Most of all, they wanted to make sure that the air-conditioning worked.

Q Growing up, what was your favourite film that you saw at Liberty?

A It would be unfair to choose. Mehboob Khan, AR Kardar, Raj Kapoor—all of these filmmakers took their products to our theatre first. The standard was known as a ‘silver jubilee’, or a 25-week run. If a film succeeded at Liberty, it was then likely to go on a successful run throughout India. It was a different time with different standards. All the films then were of consequence.

Q Is today’s Bollywood not the same?

A No, definitely not. Hindi films today look slicker. But very few have the same passion, the same level of content. Also, the values of the audience have changed.

Q How did you end up taking over the family business?

A (Laughs) With difficulty!

Q You didn’t inherit it directly from your father?

A No, my father was not always an easy man to get along with, and he and I had opposing viewpoints on cinema. My mother died during [my] childbirth. And it was just the two of us. And I was obsessed with car racing. So, at 19 or 20, I would race, and [my father] would hate it. I used to race Fiats and Ambassadors out in Madras, which is where the races were held. I would drive to Madras in the same car I would race. Eventually, I stopped racing cars and got into the business of running races. I travelled all over the world [as vice-president of the FIA].

Q When did your father pass away?

A My father died in 1970 of renal failure. It was a slow death and he was very sick in the years before that, and during that time, he and I became very close. He couldn’t take care of the theatre the way he wanted to, and I had my cars. And so he sold the property to a group of business partners who [created] a private limited company. These people didn’t share the same passion [for Liberty] we did. They only wanted to make money. And that route quickly became a disaster. The maintenance fell apart. The whole place just deteriorated. It was terrible. I watched this happen and before long I wanted to reclaim Liberty to its former glory.

Q How long did it take to do that?

A A very long time. I fought to get the theatre back for well over two decades. By the late 80s, I had taken my case all the way to the Supreme Court. At that stage, however, they relented and I was able to buy the theatre from them, and avoid arbitration.

Q You must have been relieved.

A Yes, but Liberty was in a sad state. And renovation was costly. Fortunately, some good luck came along.

A Maybe you have heard of Hum Aapke Hain Kaun… [the 1994 film]. Well, the producers had seen the work I had already done refurbishing Liberty and contacted me about premiering here, along with about six other theatres. I said I would love to but my sound system is outdated and it costs Rs 10 lakh to replace. ‘If your picture bombs,’ I told them, ‘it’s going to really hurt me financially.’ The producers were so confident of their product they offered to reimburse me the money for the speakers if the film bombed. Naturally, they didn’t need to. Salman Khan and Madhuri Dixit were huge hits, and it went on to become the top-grossing Bollywood film of all time. We ran full house  for 44 straight weeks. The film ran for 125 weeks in total. Over two million filmgoers walked through these doors.

Q It saved you?

A Yes, but it was only temporary.