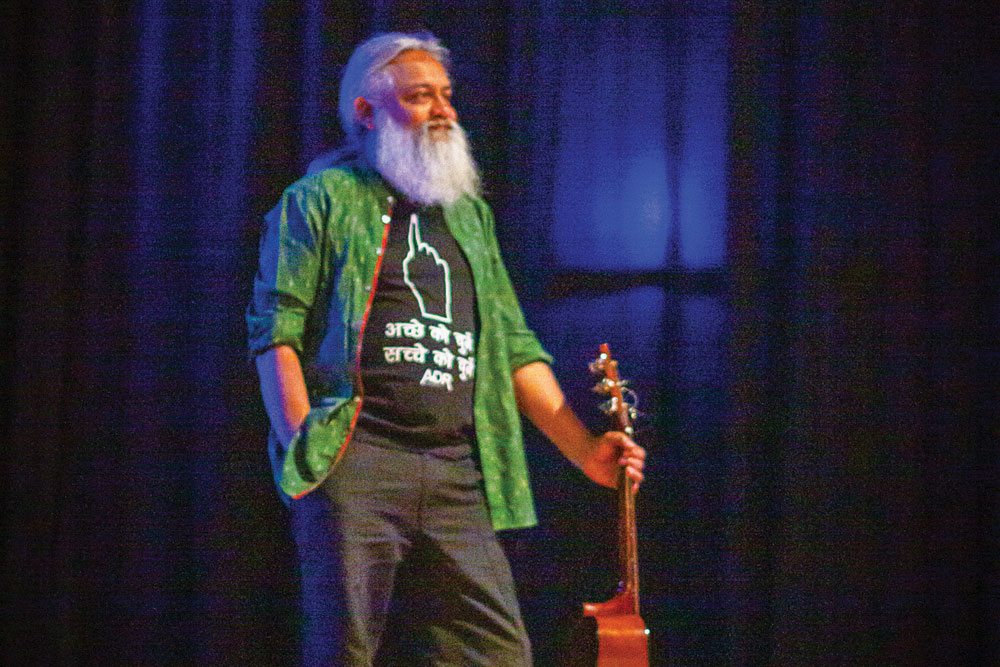 
URBAN INDIANS ASSEMBLED at public squares in Delhi, Bengaluru, Chennai and Mumbai are lifting their voices in song—and it is not just the national anthem that is on their lips. Independent India has witnessed massive protests including, most recently, Anna Hazare’s anti-corruption movement of 2011, the outrage after the 2012 Delhi gang rape, and the pro-Jallikattu agitation of 2017 in Tamil Nadu. But the educated middle class, which has usually employed slogans and rational arguments to articulate a political viewpoint, is for the first time channelling the power of music to galvanise support. In the turmoil of the citizenship protests, if rap in Indian languages besides Punjabi has emerged as a democratised vehicle of free expression, a means for young artists to pour out their fears and discontents, Faiz Ahmed Faiz’s ‘Hum Dekhenge’ has been repurposed to express solidarity with those fighting to be recognised as Indian.

At a recent protest in south Bengaluru, after a bout of shouting slogans, a speaker launched into a considerably offkey cover of ‘Hum Hindustani’, much to everyone’s embarrassment. At another in Shivaji Nagar in the heart of the city, a local singer took up a Manna De song from the mid-20th century that was part of the Indian Peoples Theater Association (IPTA) repertoire, a song, it seemed to me, of manic resignation. A demonstration at an arts college saw teens strumming pacifist pop ballads. A Gateway of India protest featured a Hindi version of the anti-fascist song ‘Bella Ciao’. The point is, for a rare time, urban Indians were out on the street singing. Out of tune, out of rhythm, and often out of context, but singing nevertheless.

Varun Grover and Rahul Ram gave them a song they could easily sing along. ‘Hum Kaagaz Nahin Dikhayenge’ (Papers, we won’t show) has become an anthem for a time when questions of citizenship are dependent on ancestry and documents. It has been reprised by half a dozen groups in different languages, and it even has a music video to boot.

The song goes:
Dictators will come and go
The NRC papers, we won’t show
You blind us with tear gas
You poison our waters
That our love will sweeten
And we’ll drink it all in a go

“There is nothing more boring than a boring political song,” says Rahul Ram, a musician and activist who has been singing anti-establishment songs since his association with the Narmada Bachao Andolan in the early 1990s. “We have had communist anthems and tribal songs but the middle class never sang in public.” A founding member of Indian Ocean—one of India’s most loved folk-and-fusion-rock bands, it stands for a unique sound and artistic autonomy Ram tuned ‘Hum Kaagaz Nahi nDikhayenge’ to be simple enough to sing along with. “Like an Anu Malik number or one of those Altaf Raja songs. You see, music is the only participatory form of artistic protest,” he says. “It’s also subversive because the sour old men in Indian politics don’t seem capable of appreciating music.”

With the Narmada Bachao Andolan and during the Telangana agitation, when winds of change blew, music was at the forefront. Gaddar, the balladeer of the revolution in Telangana was jailed and shot at, but one of his compositions eventually became the song of the state. ‘Ma Rewa’, a hymn to the river Narmada, became a protest song for the Andolan and was further popularised by Indian Ocean. “Safdar Hashmi, Paul Robeson, Miriam Makeba—their art changed our understanding of the world. Unfortunately, we haven’t had much protest music in India from professionals. Most mainstream artists today side with the establishment, fearing for their careers. You won’t find All India Radio playing Shubha Mudgal, for instance. Pandit Jasraj was taken off the air when the Congress was in power. In fact, one of the singers in the chorus of our song asked me not to mention his name,” says Ram. “Others are more open about their politics. Kailash Kher sings for the BJP. Papon and I refused to do so.”

Aisi Taisi Democracy, a political stand-up comedy and musical show featuring Grover, Ram and Sanjay Rajoura, has mined Indian polity and society for several seasons of uncensored fun. But shows can only take the discourse to woke audiences. Music in a protest space has a much broader reach.

Upon Ram’s urging, I listen to the Kabir Kala Manch, a Pune-based cultural group formed after the Gujarat riots, and economist-musician Sumangala Damodaran’s renditions of post-Independence nationalist songs by Makhdoom Mohiuddin and other poets of that age. It is beautiful, heartfelt music, but I can see why he prefers the Narmada protest songs. “Rural songs are the best. Within the local context, they say a lot of complex stuff in a few lines,” he says, citing a Bhil adivasi song about heroes and self-respect. “Urban people tend to want to do causality, and link one thought to the next. We are unable to execute meta jumps in the narrative.”

From Sufi singer Madan Gopal Singh to Carnatic musician TM Krishna lending his voice to environmental activism, from Sharmishtha Chatterjee’s collaboration with Pakistan-based Mekaal Hasan Band to young Tamil rappers inspired by Ambedkar, it is an interesting time in Indian political music. “Everyone is doing what they are good at, but most of this music is not sing-along-friendly. Even ‘Hum Dekhenge’ is complex in structure and meaning,” Ram says. A particularly melodious version in Tamil of the poem originally written by Faiz in 1979 to oppose Zia-ul-Haq’s military dictatorship in Pakistan is the latest to capture the popular imagination south of the Vindhyas.

As more and more citizens take sides, music will become an important expression of participatory democracy. To quote Robeson: “Every artist, every scientist, every writer must decide now where he stands… I have made my choice. I had no alternative.”