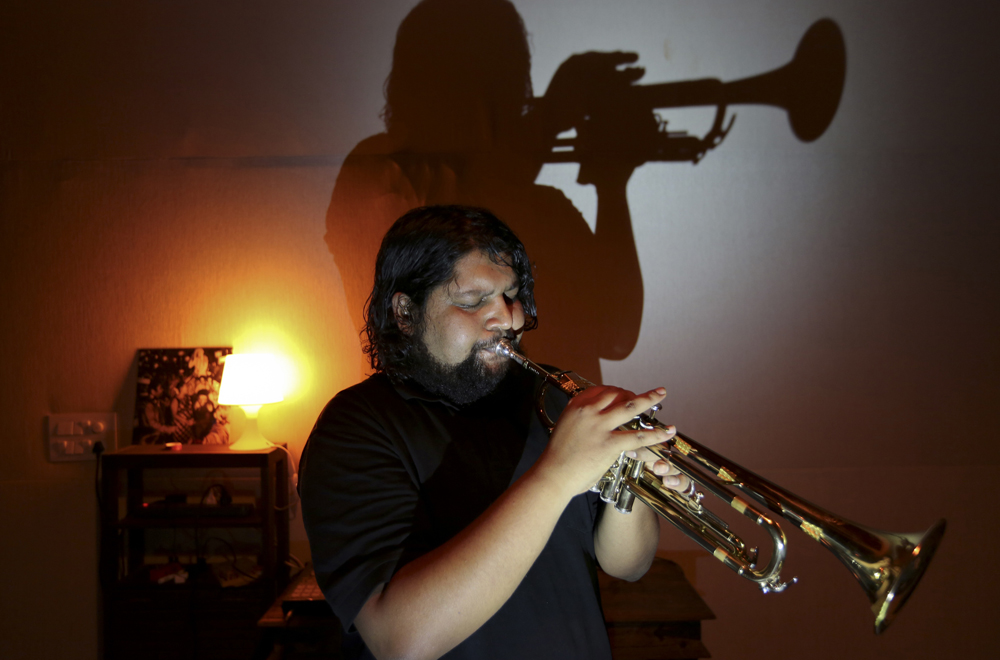 TUCKED AWAY in a cul-de-sac lined with rows of bungalows in one of Faridabad’s residential complexes, multi-faceted musician and producer Kartik Pillai’s home studio is constantly brewing new sounds. Shining with polished wood fixtures, with a hint of varnish in the air, Pillai’s home studio has one of the best treatment and equipment setups I’ve seen in the possession of a home producer lately. “I don’t step out of my room much,” Pillai tells me, confirming my suspicion. He is essentially a music-creating engine on overdrive, working and reworking sounds and rhythms that make it to Jamblu’s discography if they’re not picked up by Delhi-based waltz band Peter cat Recording co or the alternative dream-pop band Begum (two acts for which he does guitar and key duties).

Jamblu is Pillai’s dissonant alter ego that first showed up on the alternative electronica ‘scene’ back in 2013 with its debut album, Depth Training, a downtempo, dystopic rendition of electronic dance music that incorporates elements of glitch and avant-garde tendencies. Jamblu began by creating an aesthetic that was experimental in its use of synths and noise samples, which later evolved into—by Pillai’s own definition—something quite “unfriendly”. Having announced the release of new music to come out later this year, Pillai has been toiling away at creating what can be considered some of the most innovative, trailblazing, and for the most part, uncomfortably jagged works of aural art.

Pillai grew up partly in Luxembourg, where he spent a lot of time listening to orchestral performances and was introduced to Indian classical music—owing to the fact that his grandfather was an established multi-instrumentalist back in his Kerala hometown—before moving back to India to study electronic Media at Madras university, and finally audio engineering at Sae. Like most other children, he developed an ear for punk rock and grunge music as puberty came knocking. Discovering his brother’s abandoned guitar in his basement when he was in high school, Pillai flirted with the idea of joining forces with bassist Kshitij Dhyani to create the collective Begum. Soon after its appearance, and the subsequent formation of Peter cat Recording co—which happened by chance when vocalist Suryakant Sawhney asked Pillai to join the band as a guitarist—Pillai became a well-recognised figure within the independent music sphere.

He tells me how he first started taking piano lessons while he was still in grade school. “But I didn’t like it,” he says. “Because [the teacher] would be like, ‘Play it like this’, and I didn’t want to. Maybe I wanted to play some other way. I wanted to just play it, and create my own shit. Even though what I played made no sense.” This peculiar manner of creating unorthodox melodies effectually formed Jamblu’s skewed sense of harmony and rhythmic structures. Jamblu makes a habit of layering ‘modular’ synth sounds to create textures that lay the groundwork for soothing and meandering waltz and Shoegaze melodies, with hints of slow dance music, that cradle a listener until harshly distorted sounds and noise overwhelm the soundscape. Pillai uses everything from live field recordings to samples of orchestral string sections, and the occasional trumpet melody, to create music that settles in an odd spot somewhere between unlistenable and addictively groovy. The discomfort and dissonance is purposeful though, and in some measures, seem to come from a slightly sadistic interest. “You can’t really do that stuff in India, because I came back and heard of musicians like Atif Aslam and whoever,” Pillai says, “People seemed so passionate about their music and I just wanted to piss them off.”

But, to say that this aesthetic was born purely out of an attempt to subvert the paradigm would be disingenuous. It can also be attributed to a fascination Pillai harbours for his imagined idea of a dystopia: a search for order within chaos, if you will. “I’m just doing my thing,” he says, “and as time goes on, I see myself getting into darker and weirder stuff.” Jamblu showcased one of their new tracks, Senshtul, in March this year, before releasing another track, You Can Tell Me, in October. The tracks display a slight deviation from what was originally defined as dystopic EDM, making Jamblu’s new musical direction seem more melodic and noisier in equal parts.

Jamblu may seem outside of the common paradigm on account of its eccentric musical sensibilities, but Pillai is not alone. He is part of a movement being set in motion by a rather sizeable collective of left-of-centre audio artists that have created a musical miniverse of sorts within the existing popular independent music circuit. Ruhail Qaizer, a Delhi-based harsh noise musician who hails from Ladakh, is one such artist who released his debut four-track EP, Ltalam, in 2016 as part of his then solo project Sister. It was perhaps the first time noise music could truly claim to have grasped a foothold in the country, moving away from being a clandestine subculture and gaining a measure of popularity. Qaizer, who is now famous for his grotesquely harsh noise aesthetic and signature guitar drone sound, has collaborated with Pillai on a track set to be released soon by Jamblu.

Both Jamblu and Sister are patrons of other musicians and members of a much larger community of experimental audio visual artists called REProduce artists. REProduce began as a record label or platform for upcoming musicians, and was founded by the curator, economist, writer and filmmaker Rana Ghose back in 2013. The community began as a humble group of followers and musicians who shared an interest in experimental and alternative music, and has turned into a mammoth underground movement that has witnessed musicians play on stages that were created in Himalayan palaces and decommissioned army bunkers in Shanghai, apart from spots all over Asia, Europe and North America.

JAMBLU’S LATEST musical venture is slated to be released as either a slew of singles, or at most, two separate EPs. Pillai’s decision on the subject remains unclear. “There’s almost no point in releasing albums,” he says, “Most people I know who heard Kendrick Lamar’s last album didn’t even listen to the whole thing.” each one of Jamblu’s previous releases has had a conceptual thread running through it. Although the new releases are not going to hold a well-defined concept, they are meant to convey a mood. For this reason, Pillai maintains that what was originally meant to be a full length—at the moment untitled—album coming out of the Jamblu camp would now have to be split into two parts that are meant to be heard as whole, with the split serving as an intermission of sorts. There’s no arguing; Jamblu’s musical escapades and likeability are an indication of India’s changing tastes for alternative music. Relieved of the pressure of having to please the average listener, Jamblu has become part of a community of artists whose redefinition of the art is a reflection of this generation’s unapologetic nature. The question about whether this movement will be just an ephemeral spirit or a true shedding of the ‘niche subculture’ tag is yet to be answered. Either way, one can safely assume that we can take solace in the fact that artists like Jamblu are at the forefront of this redefinition.