Neither commercial nor experimental, Mohit Takalkar has developed his own stage idiom. And now it’s winning awards 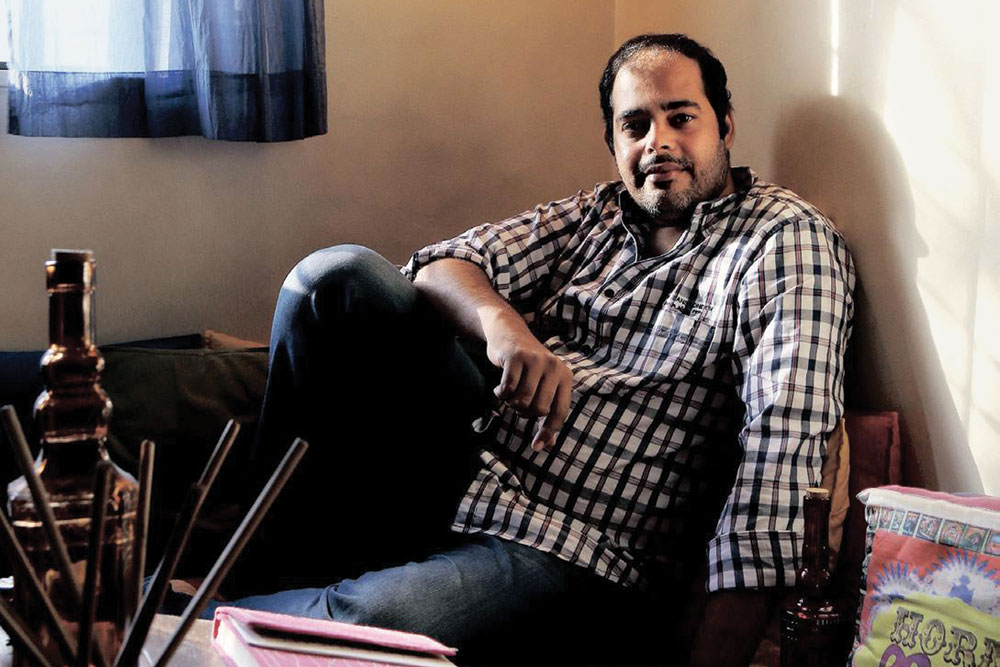 ONE OF THE SCENES from Mein Huun Yusuf Aur Yeh Hai Mera Bhai, a multi-award willing play at the 11th Mahindra Excellence for Theatre Awards (META), including for Best Director, has a dialogue which leaps out at you. The play is set in Palestine in 1948, when the country was gripped by political turmoil and uncertainty about its future. But in this scene, a madman in a village wants to talk about metaphors, not politics. The rational man speaking to him offers him an uncharacteristic insight: “People don’t want to discuss metaphors because they tell the truth. People want to discuss politics because it is all lies.”

The idea that mystique reveals more truth than the literal that packages shiny lies disguised as the truth has universal resonance. But perhaps the point can be stretched to theatre as well—the theatre of shiny lies, where grand sets and costumes don’t speak to you at all. Versus the blurred metaphorical theatre with its bare stage and strange visual language which is oddly revealing of the human experience.

It wouldn’t be a stretch to slot the work of Mohit Takalkar—the director of Mein Huun Yusuf Aur Yeh Hai Mera Bhai—into the latter category. The artistic director of Aasakta Kalamanch, locates his experimental practice in no- man’s land in Pune’s theatre scene, given that his style doesn’t adhere to any of the ‘big’ schools of theatre in his city.

Pune is a formidable theatre backdrop to work against: there is the immensely successful commercial theatre that runs packed shows to 1,000-seat theatres, and then there is the experimental, intellectual tradition. From the start, Takalkar knew the traditional commercial theatre, with its box sets and living room dramas, did not appeal to him. “People come sit, talk, they have tea… There are bright lights, loud dialogue delivery. I wanted people to talk to each other, not at the audience. For me, it’s okay if the 200 people sitting in the back row don’t get to hear a few lines,” says Takalkar.

Takalkar started his theatre career in 2003 with the Progressive Dramatic Association (a group started by Shriram Lagoo). But within a few years, he realised that he wanted to break away from this model too. “All the plays we did there were the kind that had been done, had been performed by someone else before. I always used to hear, ‘[Satyadev] Dubey did this’, ‘Vijaya Bai did this’, ‘Karnad did this.’ I realised I should look for plays that speak my language, my concerns,” he says. There started a promise that Takalkar has stuck to till now: only do pieces that have never been performed before. His association with young playwrights such as Sachin Kundalkar led to a series of experimental theatre mostly revolving around contemporary issues such as relationships, urban life and so on. Fridge Madhe Thevlele Prem is a play about a young couple who are so busy working all week that the only time they get to make love is on the weekend, so they make an excess of it and store it in the refrigerator.

I wanted people to talk to each other, not at the audience. For me, it’s okay if the 200 people sitting in the back row don’t get to hear a few lines

Over the last 13-odd years, and 30-odd plays, Takalkar’s work has shamelessly transgressed these boundaries. Some of Aasakta’s initial plays like Fridge Madhe Thevlele Prem were focused on—in Takalkar’s words— “trivial” subjects such as sexuality, relationships, and confusions of the younger generation.

He has also worked on a series of political plays such as Ramu Ramanathan’s Kashmir Kashmir, Comrade Kumbhakarna for the National School of Drama’s Repertory and Makarand Sathe’s Charshe Kothi Visarbhole. There have also been other devised plays such as Gajab Kahani, a play based on José Saramago’s The Elephant Journey, and the highly-acclaimed Tu, based on Rumi’s poetry.

Not surprisingly, the treatment, venues and visual language, are as schizophrenic as the subjects in the plays. So while small venues have almost always been a mainstay for Aasakta productions, in recent times, some productions have also been staged in big auditoriums. “It was very clear to me that the kind of theatre I was making, I won’t have big audiences queuing up to see shows. I have niche audience, and the kind of plays I did, lend themselves well to the intimacy of small space,” he says. But then came a point that the productions themselves started demanding a certain kind of venue. “It wasn’t because I wanted a big audience. The productions—such as Gajab Kahani —needed a massive stage for me to tell the story like I needed to.” Gajab Kahani, Saramago’s story of an elephant who travelled from Lisbon to Vienna, had a two-storeyed immovable set, almost like an elephant. The elephant itself was played by a petite actress, Geetanjali Kulkarni. “We needed to show scale, but we also needed to show journey and movement. To bring out these elements of the spectacular, needed a big stage. We could not stage it in our usual venue where you can almost adjust the lights on the nine-feet-high stage by standing on your tiptoes,” says Takalkar.

In contrast was Tu, a play composed entirely of Rumi’s poetry, using a completely bare stage. There were 52 different poems—and each had multiple meanings—and 36 different settings. One was in a street, one in a palace, the other along a river, one in a bar, another on top of a mountain. “If I really wanted to stage all those elements, I would need a much bigger venue and budget, which we didn’t have. I decided to have a completely bare stage,” he says. Up until then, he recalls, all his works had tried to maintain a naturalistic element, despite the experimental tenor of the works. “If the play required a bar, there was a bar, a bar stool, the music. Then I realised, ‘Why am I doing television on stage? I don’t need it.’ Theatre has that power. If you say ‘bar’, people will believe it’s a bar. Theatre has that magic. That was the power I was introduced to, in Tu,” he says.

All the different locations of the play were imagined. “Let’s create it by imagining, I thought, and people will follow. When we did it, we had no clue how it’ll be received,” he says. Something clearly worked, because despite being so experimental, Tu was also one of Aasakta’s acclaimed works, bagging awards, invitations to festivals, allowing the play to be seen in a context different to that in which it was created. “Something was clearly translating,” he says.

Takalkar trained in theatre fairly late into his theatre career (a Master’s from the University of Exeter in 2009-10) but his ruthless self criticism and self- reflexivity works as an inbuilt quality check. Untouched by the rave reviews of Tu, he can only think of the elements in it that leave him unsatisfied till today. (“How do you translate the multiple meanings of poetry onto the stage where you can have just one course of action?”) He once even got an entire festival of Aasakta’s plays cancelled as he could no longer stand the previous work he had done. “I thought I would die of embarrassment,” he says. Most recently, he recalls, he cancelled shows of a play, Bandish, after five runs. “I just couldn’t get the hang of the script. I failed miserably,” he says.

Mad as it may seem, the in-between land of Takalkar’s theatre is a tough place to be, as he’s constantly asking if the space he’s made for himself is where he should be. Like Yusuf’s brother tells him in the play, “Everyone wants to be the same. They have the same moustaches, the same stories. You are different.”