The story of a men’s liberation movement 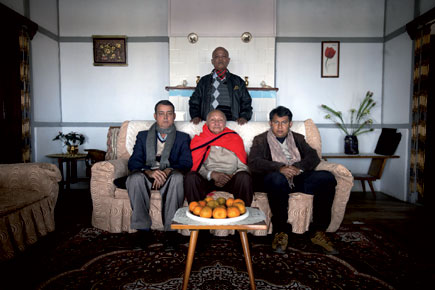 The story of a men’s liberation movement


Minutes away from Shillong’s bazaar, through a road that dips and rises like a saddle and is often shrouded in a thick layer of fog, stands Earle Holiday Home. Restored after years of disuse, the structure may serve as a lodge for backpackers, but back in 1920, it was built to function as a sanatorium for British soldiers during World War I. It is rumoured that even a certain Subhash Chandra Bose spent a few nights here.

Today, however, within the closed doors of the lodge’s hall, three men and a woman sit around a table, discussing what to many local ears is heresy. Meghalaya is one of the world’s last surviving matrilineal societies, a source of wonder for anthropologists and visitors. The four people at the table are discussing how to overthrow that tradition.

The quartet—Pilgrim K Lakiang, a retired civil servant, Kieth Pariat, a trustee of the lodge, Rivertis Parionly, an assistant scientist, and Otricia M Warjri, a school teacher—are office-holding members of a group named Syngkhong Rympei Thymmai (SRT, which when translated means ‘a new hearth’). Calling their stir a men’s liberation movement, their objective is to convert the centuries’ old matrilineal system of Khasi succession into a patrilineal one. The SRT has around 3,000 members, many of them silent supporters, too afraid to support this rebellious ideology openly.

The SRT was founded in Shillong on 14 April 1990. The four rebels claim and then remind you that the date coincides with the birth anniversary of another liberator, BR Ambedkar. Their movement, they say, is important. For, in it, they contend, lies the survival of Khasis.

Khasis reside mostly in the Khasi and Jaintia hills of the northeastern state of Meghalaya. A significant number also live in what is now Bangladesh. According to folklore, they are descendants of what they call the Hynniewtrep (‘seven huts’). The legend goes that God divided the human race into 17 heavenly huts. The residents of seven climbed down a ladder resting on the state’s Sohpetbneng peak to start the Khasi race. Historians trace the tribe’s descent to an ancient Mongolian group that crossed the Himalayas southwards to what is now India.

Khasis practice matrilineality, among the last few societies in the world to do so. According to a few writers of the past, like Lewis H Morgan and Fredrich Engels, the matrilineal system predates patrilineality. Although this hypothesis is often disputed, these thinkers claim that humanity’s earliest domestic institution was not that of the family but of the matrilineal clan. Khasis, many believe, adopted such a system because their men were warriors who raided the plains and waged wars with other tribes and were away for long stretches of time.

In Khasi society, not only do children take their mother’s last name, it is the men who move into their wives’ homes after marriage. Not just that, even property is inherited by daughters. The Khaduh or youngest daughter acts as the custodian of ancestral property. Being the youngest, she is expected to take care of the property for the longest possible period. In such a family, the father has little authority. It is the maternal uncle, whether married or not, who acts as the children’s guide.

Twenty years ago, Keith Pariat did something unspeakable. He gave his firstborn, a daughter, his last name. Pariat is a trustee of Earle Holiday Home and a well-to-do contractor in Shillong. Pertinently, he is president of the SRT. He was simply doing what he believed in. However, his decision did not go down well with his wife’s relatives. And last year, when his daughter won a scholarship from the state’s governor, she was forced to drop his last name as her own. Not doing so would have lost Keith Pariat’s daughter her rights to ancestral property owned by his wife.

“Even 22 years since our group’s formation,” says Pariat, seated around an oval table with three other members of the group, “we are forced to practise such antiquated traditions.” The SRT’s chief argument is that while matrilineality may have worked for Khasis in olden times, it’s an unfeasible idea now that Meghalaya—especially Shillong—is so closely connected with other patrilineal cultures. The group says that this system has had hurt the social standing of Khasi men, and thus injured the tribe’s stature overall. “They don’t own property, live with their mothers or wives, and they don’t even have much say in the lives of their children. Often, they don’t even get loans sanctioned in their names because they don’t have property to show as collateral,” says Pariat, adding that many young males have turned into drunks and substance abusers as a result. The group claims that many Khasi women now marry non-Khasis because men of patriarchal set-ups are so much better placed, rendering Khasi men a raw deal. Inter-community marriages also have another peculiar aspect. Whenever non-Khasi men marry Khasi women, the tradition of matrilineality grants them access to the property inherited by women. This way, Khasi property ends up in the hands of others.

Every few months, the SRT holds awareness programmes at various Khasi villages and towns. It puts up loudspeakers at village bazaars or centres and hands out brochures explaining its ideology. One point that the group has taken up is an aspect of the Khasi Custom of Lineage Act of 1997 that bars sons, in the absence of daughters, from inheriting family property. According to the tradition of rap iing (which roughly translates to ‘help the house’), which this law binds them to, sons cannot inherit ancestral property even if the family has no daughters. A girl from another family has to be adopted, who then acts as a custodian of the property.

The group also intervenes on behalf of men who find themselves victimised for asserting themselves. It steps in, for example, when government offices refuse to provide youngsters who bear their fathers’ last names with Schedule Tribe certificates.

The SRT, however, does not insist that its members give up matrilineality. Change will be slow, it expects, and the idea is to gain momentum over the years to overthrow the system eventually.

Khasi society, no longer as insular as it was once, is indeed undergoing a transformation, according to Iamon M Syiem, former SRT member and current head of the sociology department of St Edmund’s College, Shillong. “Families are turning nuclear and clans no longer wield as much influence as they once did,” she says, “Although Christianity never directly interfered in the practice of matrilineality, the religion with its strong patriarchal orientation is playing a part in the consolidation of the authority of the father, who is gradually taking over the role so far of the maternal uncle.” The professor says that the SRT’s agenda is best viewed as a reaction to a traditional set-up, just as feminism is to a patriarchal one.

Long before he learnt of the SRT, Tensing Paul Syiem got married in a church under the protection of policemen in plainclothes. Syiem was born and raised in the Assamese town of Digboi, where his Khasi parents lived patrilineally. In Cherrapunji, where he moved for a job, he fell in love with a Khasi woman named Shidalin Phanbuh and laid down two conditions if they were to marry: she would live in his house and their children would bear his last name. After a two-year courtship, Phanbuh eventually accepted his terms, but was thrown out of her mother’s home. Days before the wedding, the groom-to-be was delivered a curt message from his bride’s maternal uncle: ‘I will slit your throat before letting my niece step into your house.’

With an affidavit on the threat filed at the magistrate’s office, and under the guard of a posse of policemen, Tensing married Shidalin Phanbuh without any trouble. The sole representative from Phanbuh’s family at the wedding was her long separated father, though even he refused to step in Tensing’s house. To him, the couple had committed heresy.

Tensing is now general secretary of the SRT’s Cherrapunji unit and his case is often offered as an example of the oppression faced by those who espouse the group’s ideas. There are, of course, many other such stories. Many Khasis have been mocked and ridiculed for daring a break with tradition.

Today, among those present at Earle Holiday Home are SRT Vice-President Rivertis Parionly and General Secretary Otricia Mary Warjiy. Parionly is 34 years old and works as an assistant scientist at the Indian Meteorological Department at Shillong. He remains a bachelor because all the women he has proposed to so far have turned him down, unwilling to move into his house, as he’d want. Warjiy, among the young girls who have joined the group because they have come to believe that Khasi males need a better deal, continues to face pressure from her maternal clan to drop her father’s surname.

The SRT, however, wasn’t the pioneer of this so-called men’s liberation movement. Such voices were raised even half a century ago.

In fact, that honour goes to a Khasi group called Iktiar Longbriew Manbriew (ILM: ‘The authority to live a proper life’) that came into being in 1961, inspired by a book titled Ithymmei Ka Longbynriew (‘Source of Humanity’). Written a year earlier by JD Lyngdoh, the book sought an answer to the question of why Khasi men were lagging others sociologically and economically, and argued that that this was the doing of matrilineal succession.

The 82-year-old Dr A Lyngwi, the sole surviving member of the ILM, who lives in Cherrapunji, recalls travelling to various villages, holding public meetings and engaging intellectuals in debates. He grew inured to chants of ‘traitors’ and ‘infidels’ whenever they’d address public gatherings. Once, when a debate held in a hall in Cherrapunji bazaar turned exceptionally heated, a group of women accosted ILM activists as they were leaving the hall. Some of them bore knives, and Lyngwi and his colleagues had to flee. Without much support, the group disbanded in about a decade.

Lyngdoh, however, kept up his campaign for a patriarchal society. In 1989, he stood for elections to the Khasi Hills Autonomous District Council, hoping that he could pitch his ideas from within the government. He lost. And in 2005, he passed away.

Today, it is the SRT that is leading the campaign. Its agenda is resisted not only by Khasi traditionalists, but also by some scholars. Analysing the male’s social standing within Khasi society, Tiplut Nongbri, a professor at Jawarharlal Nehru University, in a 2011 study titled ‘Deconstructing Masculinity: Fatherhood, Matrilineality and Social Change’, argues that the matrilineal system is not detrimental to the status of men. She explains that although women are custodians of property and the family line is traced through them, they wield little actual power.

Hasina Kharbhih, a well-known social activist in Shillong who works on issues of child trafficking and HIV/AIDS, and who recently completed a survey for the Centre on the status of women in Northeast India’s various tribes, says that the notion of matrilineality being beneficial to women is far from the truth. “What we found in our survey is that women are excluded from decision-making both within and outside the family,” she says, “Very few of them make it to elected positions within clans and villages. And there is as much, if not more, violence and abuse directed against women in Meghalaya than in any other state.”

Lancelot Gross Lyngdoh, who heads the SRT’s Cherrapunji unit, is an abiding practitioner of the group’s ideology. Many years ago, he’d given his daughter his title, and his incensed brother-in-law turned up to pick a fight with him. But Lyngdoh confronted him right at the door. “Don’t you step in here,” he warned him, “This is a man’s house.”