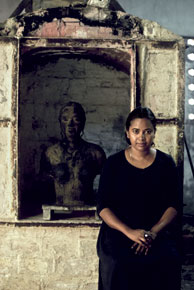 I built as a Toy is among first of many works you confront at the Art*ry Gallery in Cochin, where Chennai-based artist, Benitha Perciyal’s solo, ‘Still and Still Moving Life’, is showing till the end of May. Nine feet tall and with a diameter of about three- and-a-half feet, I Built As a Toy is an intricate weaving together of nearly 14 kg of cloves, embroidered painstakingly to resemble a garland and constructed in the form of a stupa. In its form, this small and almost suffocating shrine- like installation, which curious viewers can step into—at the risk of choking, courtesy the overpowering aroma of the spice—is both innovative and evocative, reflective of Benitha’s ingénue. Its content—inspired by an art trip to Sri Lanka many years ago, where Benitha spent many hours engaging with and listening to the lives and stories of locals— is indicative of her ability to store memories, moments, experiences, and translate them into works of art that confront, provoke and disturb. “This work is meant to delineate the idea of suffocation in space,” Benitha says.

Not far from that installation is Don’t Look At Me, a piece of wood carved in the shape of a hand-mirror with a single palm seed engraved as an eye. Somewhere around, in one of the three rooms of the gallery, a five-foot large papier-mâché bowl houses tecoma seeds stuck finely together, and quietly rests on a wooden pedestal. The work, strikingly reminiscent of a mother’s womb, is titled Unless a Seed Falls To the Ground and Dies, It Produces Much Fruit.

At Art*ry, Benitha’s exhibition is a collection of her works from across varied phases of her life as an artist. Carefully curated to reflect the ideas of space, longevity and the self, this solo show attempts to celebrate the abundance of nature and its allied qualities. For example, inspired by the idea of sustenance and continuity is a painting titled Key To The Garden, which has a delicious fig tree housed in Chennai’s Lalit Kala Akademi as its protagonist. “This tree,” Benitha says, “has stood the test of time. So many people have found shade and shelter under its branches. The tree gives what it can—and abundantly—to everyone. The Lalit Kala Akademi, too, is like that, right? It is for everyone… So is the world.”

Benitha is referring to a pack of dogs that have made the Lalit Kala Akademi campus their home for the past 12 years. The canine presence, though, has sparked off tension and animosity between the Akademi’s director and a handful of artists, all of whom believe in the principle of ‘live and let live’. At the centre of this politics is Benitha, who is vociferous in her support of these helpless creatures that have, as she says, nowhere else to go.

Benitha is an artist of paradoxes. She is methodical and maniacal at the same time; meticulous and free-spirited in the same breath; her scientific bent of mind coexists happily with the spontaneity of her creativity; she is a minimalist and a collector; she believes in the abundance of hope and is equally aware of the fragility of existence and its uncertainties; she is always in the now, and yet she is always distant; a keen observer, committing and storing ideas and things on the myriad shelves of her mind, blessed with an uncanny ability to rummage through them and pull out—now, or later, depending on the need and the context—a thought or thing to be used appropriately in a work that articulates both the personal and universal.

Loss and self-preservation, for instance. Some three years ago, Jerry, a baby squirrel, came into Benitha’s life. “My entire routine changed,” she says, “I tended to him with great care, and before I knew it, he had become an integral part of my life.” And then one day, suddenly, Jerry disappeared. Benitha was devastated. “But I realised a few days later that I hadn’t seen him die, so I convinced myself that he is still alive somewhere.” Last year, as part of Art Chennai (an annual event that lets the city’s artists showcase their work across an array of venues), Benitha crafted a beautiful bracelet in memory of Jerry; it flashed white with Jerry’s broken teeth, which needed to be sawn at regular intervals, and were woven together by a spiral of gold that was intricately interlocked and welded together. While on a recce to one of Chennai’s luxury malls to identify spots where she could exhibit her work for Art Chennai, Benitha met another artist, whose first response on spotting Benitha was, “How come you are here?” Oddly enough, two days later when she went there again, she bumped into the same artist who asked her the same question again. “It got me thinking. What did she mean? I wondered,” Benitha says, “Did I, in a sense, not belong there? Did it have anything to do with the way I looked, my clothes, the colour of my skin?” It inspired Benitha to create an installation— Mother Mary, cast in incense— to celebrate the natural tenderness of a mother, who rests against the backdrop of a painting of a fig tree dripping with qualities of abundance, sustenance and an ability to envelope in its arms anyone and everyone, irrespective of societal norms and perceptions.

Benitha has been, in a sense, shedding her baggage through her work, using paint, print, stone, wood, clay and incense, individually and collectively, to express freely and fiercely her fears, insecurities, observations and experiences. It was in 1995, after she finished class 12, that a young Benitha had knocked at her aunt’s home in Chennai to share space with her and pursue arts at the Government College of Fine Arts. Benitha was a small-town girl, born and raised in Tamil Nadu’s hilly Thiruvannamalai. She grew up with an abundance of space; she still remembers lazy afternoons back home, open, empty lanes, welcoming homes, the freedom, the comfort of security, and love. “I never came home until late in the night; my brother, sister and I would be busy with kids from the neighbourhood, hanging out with them in the open or in homes… Space was never a constraint.” Not surprisingly, in Benitha’s world, space is sacrosanct. Her home, in a crowded residential quarter in North Chennai, where she lives with her photographer husband, Prasanna, is an oasis of calm and creativity. Minimalist in form and furbished gradually over time—“and based on the availability of finances”— the house is essentially a coming together of brown and white. “We sleep on the floor,” Benitha says, taking me to her master bedroom, which is empty except for an Apple Mac desktop. The couple did away with tiles when they moved in three years ago. “We wanted to feel like we were always walking on the mountains,” Benitha says, “So we opted for stones as our surface.”

Likewise with her installations. Pedestals and backdrops, to her, are as important as the work itself. “The context of the work is very relevant; while creating work, I always tend to choose a material that speaks by itself, for itself. I like to celebrate the naturalness of material.” Yet, her work is sparklingly versatile. For a 2008 solo exhibition titled ‘Surface to Origin’ in Thailand that was built around the idea of portraiture, to create an organic sense of form on paper, Benitha stained a sheet of paper with tea marks and dyed tiny bits individually and fixed them to their surface. The effect was coarse, yet aesthetic; there was form alongwith a sense of the formless. For one of the works she showcased at Art Chennai, Benitha wanted to wear a dress, photograph herself and then develop that idea. From that train of thought was born a work that was a tribute of sorts to Jerry, her squirrel. “I ended up creating a dress in the form of a squirrel, and for the material of the dress, I attempted to recreate the texture of Jerry’s skin; I used different types of wool, silk thread and hem on muslin,” she says.

As an artist, Benitha is exact and astute. She is patient and focused, treating her work space like a scientific lab. Her own range as an artist—she is a painter, works with mixed media, and also a sculptor and an installation artist—stems from a deep interest in understanding material and process. Her sense of rigour combined with her scientific approach allows her to envision work across mediums and in ways that are best reflective of the thought process behind them. Benitha, however, credits that to her year-long training in printmaking at the College of Fine Arts. “It was a fantastic learning experience,” she says, “But I woke up one morning, a few days before it was time to write my final exams, [and found] that I was hardly painting and that I was here actually to study painting.” Not one to compromise, she met her Head of Department and asked for a change of course, and started from scratch. “But studying printmaking,” she says, “allowed me to understand the techniques on the surface; plus, the meticulous workmanship involved in it was absolutely enriching.”

Benitha’s relationship with self- portraits found its genesis in her final year of her undergraduate education when she spent restless periods of time worrying about her creative project and its submission. A compulsory class on nude study sparked her imagination. “During class, the windows would be covered with black cloth,” Benitha says, “When the class would be over, I would hang around the class, trying to peel off the sheets; when I did that, I’d see my reflection on the window.” That became a subject for expression and led Benitha to study self-portraits with renewed intensity, and she went on to experiment with creating spaces and contexts in which the self was spaced, placed and centred. While studying for her Master’s degree, Benitha shrunk into her sketchbook, drawing and painting avidly. After college, Benitha moved into a church hostel and took refuge as an artist at the Lalit Kala Akademi. “I really missed the environment of an art school, and the Akademi was the closest bet,” she says.”

One day, many years ago, on her way to college at Chennai’s Saidapet station, Benitha spotted a teddy bear lying on the railway tracks. Her heart urged her to pick it up, but she was worried about the perception of those around. In the evening, on her way back, the bear was still there. It had moved a little further and was slightly damaged. The next morning, it had moved further on, and was now completely disfigured. “It pained me to see that,” she says, “But that episode taught me never to shy away from picking up a doll I find lying abandoned.” In her first solo, ‘My Museum’, Benitha had on display a cot exclusively for all of her dolls under a title that read, Door No 62 , taken from the number of her hostel room. Everybody needs a home, a space, one’s very own sanctum sanctorum. Nobody understands that better than Benitha— as apparent in her art and life.