Jayasri Burman: In the Garden of Earthly Delights 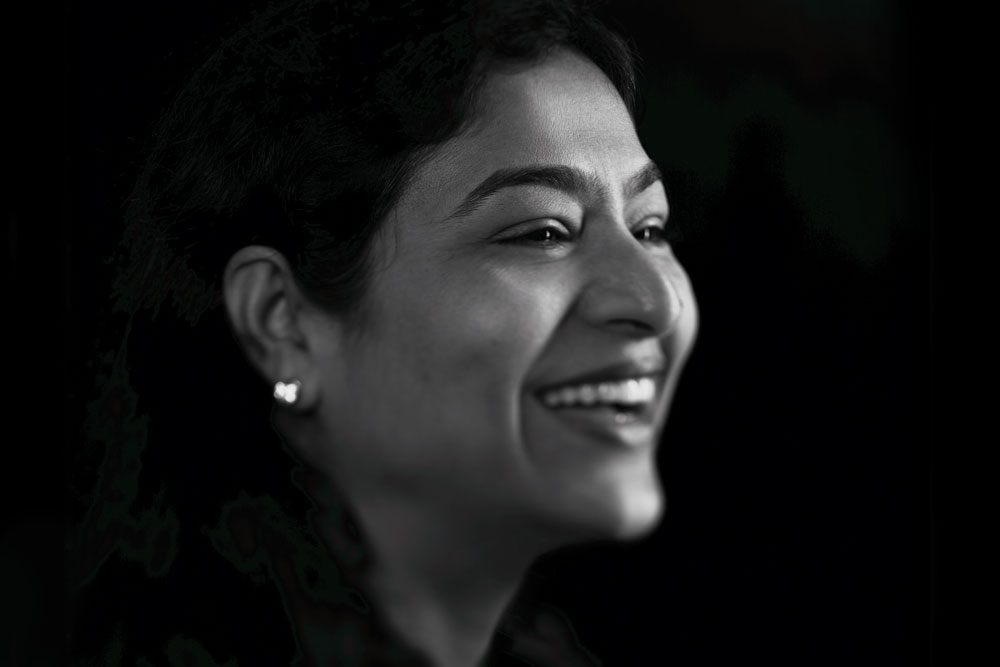 
HINDUS WORSHIP RIVER GANGA AS THE worldly reincarnation of goddess Ganga. Legend has it that she was such a powerful celestial force that Lord Shiva had to contain her furious flow of water in his dreads and help her descend to earth. Considered the holiest of all Indian rivers, it can purify sins and bring salvation to the dead. Another significant avatar of the Ganga is that of a mother who drowned her seven sons, all of them cursed, shortly after their birth. “She’s a life force but when needed, she is capable enough of cleaning up,” says artist Jayasri Burman, whose latest solo show River of Faith is an ode to Ganga’s tapestries and mythologies. Tellingly, in Burman’s carnivalesque universe — a beguiling mix of the mannerist and tribal traditions, pattachitra art of Odisha and Bengal and homegrown miniature style — the Ganga emerges in all her multifaceted forms and permutations. Painted in the artist’s typical iridescent palette, the Ganga dominates as the iconic feminine presence in a befitting manner. The “universal mother,” as Burman calls her, calmly rides the makara, her vehicle of choice that happens to be a cross between a crocodile and dolphin. All around, the scenery brims with blooming lotuses, chirping birds, sea creatures and matsyakanyas (part-woman, part-fish) swirling and twirling and animals glowing in her benevolence. It is Ganga’s world and we are just living in it. The show comprises over 100 new paintings and bronze sculptures, nearly all of them revolving around the maternal facet of the Ganga. One entire black-and-white series, for instance, is dedicated to Janhavi, which happens to be another name for Ganga. “This exhibition spins a visual imagery around well-wrought mythological retellings, bringing alive the old tales and contemporising them to suit present times, which is also the artist’s own perception of how she views life or how she would like others to view it,” says Somak Mitra, director, Art Exposure gallery, mentioning that a sizeable portion of these works are fruits of Burman’s lockdown labour.

Hunkered down at home, as Covid-19 raged through much of 2020 and 2021, many artists sought refuge in the therapeutic nature of their work. Burman was no different. She shared the lockdown days with her husband, fellow artist Paresh Maity, at their Greater Kailash home-cum-studio. She spent month after gloomy month pondering back at the roller-coaster her life had been thus far. Surviving the pandemic wasn’t easy but worse was yet to come. In May earlier this year, as the second wave of coronavirus clobbered several parts of north India, gut-wrenching images of corpses floating over the Ganga began appearing in the media. “It was deeply disturbing,” Burman tells Open. “These were people who died of Covid-19 but since there was no space for cremation, their bodies were thrown into the river.


Personally speaking, it was very heartbreaking for me to see Maa Ganga being turned into an open burial ground.” Burman has always been drawn to the sacred river, both as a believer and as an artist. But this time she felt an added compulsion to respond to her inner urge and bring out the Ganga’s purity and piousness to counter the holy river’s tragic moral pollution. That’s how her special Ganga series was born.

Her outsized devotion for the Ganga goes further back — all the way to her childhood in Bangur Avenue, North Kolkata of the 1960s and ’70s. She says she’s a product of the river Hooghly. “My parents had a deep reverence for Mother Nature and they taught us to relish her bounties but also respect and value it,” Burman explains. While it was her father who introduced her to Banaras, its rituals on the ghats and the spiritual charms of Ganga, her mother has been an even stronger influence on her ideas about life and art. “Consciously or unconsciously, my mother has been my muse,” Burman, 61, says. “She had beautiful eyes and long, curly hair. She was a quintessential Bengali woman, very determined and worldly-wise on one hand and a sensitive soul on the other. She looked after her large household cooking and serving around 40 people daily and then would spend her evenings on the terrace quietly practising her sitar. This was the enchanting ambience I grew up in.” This imagery is a staple of Burman’s highly decorative art. It’s not uncommon to find in her work a Saraswati-like figure taking the centrestage cradling her sitar. From its musical notes emanate all kinds of magical elements, dramatically blending the human and the divine. It’s a self-contained world, very much a garden of earthly delights in which all beings enjoy a joyous co-existence and the mother and goddess find a perfect symbolic union.

Burman admits that her work straddles Hindu folktales and fables but ultimately, all myths are her own. “It’s my imagination or fantasy if you like. Everything is filtering through my heart and mind. I wish I could say I am the boss,” Burman says with a laugh, seeing herself more as a storyteller. “For me, art is an emotional reaction to our deepest feelings and belief systems. My aim is to create possibilities where the world is once again full of wonder and harmony.” Her paintings, both in River of Faith and otherwise, embody the spirit of feminism. Save for Lord Krishna occasionally, the male gods are largely absent from her oeuvre. In other words, her narratives are driven purely by compassionate goddesses usually accompanied by floral motifs, cows and deer, fish and elephants and countless moral allegories. Rarely will a viewer find a Burman work without the nymph-like female protagonist looking out at you from her pedestal in all her gooey goodness. Is her art, then, autobiographical? “I don’t know,” she supposes, “but I can certainly tell you that I am inspired by the strength and power of a woman. Only a woman or a mother can do the kind of sacrifice that Goddess Ganga does when she puts her children back into the river. A woman can be loving and kind-hearted but also destructive when the time comes. In nature, you see the same behaviour.

That’s why I always say, ‘Please never take panga with the universe,’” says Burman, herself a mother to a son (fashion photographer R Burman).

For me, art is an emotional reaction to our deepest feelings and belief systems. My aim is to create possibilities where the world is once again full of wonder and harmony, says Jayasri Burman, Artist

Goddesses are totemic figures to her because Durga, Saraswati and Lakshmi were notable frames of references in her own family. Like in many other Indian households, she grew up venerating the deities as well as referring to them in friendly terms. “When a girl was good in her studies and well-read, my mother used to say, “Look, she’s like Saraswati.” For someone who was hospitable with a kitchen full of good food, she would compare her to Annapurna. When someone kept her home nicely, she would say, “She’s like Lakshmi.” That was the source of my fascination with these all-giving goddesses.” Despite seeing the Durga festivities up close in Kolkata and hearing about Saraswati’s wisdom and Parvati’s exploits through bedtime stories as a child, Burman ended up being intrigued by a less obvious attraction from the Indian pantheon — Draupadi, the Mahabharata’s tragic heroine. “I love Draupadi and have painted her quite frequently,” Burman reveals. “It is said that she was the reason behind the Mahabharata war but that’s so foolish. We totally skip the fact that she came into this world to extrapolate the truth. Nothing but the truth. I find all kinds of beauty and power in her. She’s an embodiment of grace who faced obstacles and was abused but still went on to look after her five husbands and did her duty. She wanted to marry Arjun. She suffered and cried, but eventually fulfilled her destiny.”

BURMAN’S OWN LIFE HAS BEEN NO LESS TRAUMATIC. “People look at my work and say, “Wow, so much joy.” But there’s pain beneath it. Nobody sees that, perhaps because I have learnt to keep my emotions to myself,” Burman insists. “I went through an unhappy marriage for 17 long years and the shock of losing a son at childbirth, I cannot even begin to tell you. It was a big struggle, emotionally, mentally, physically and economically.” She had made up her mind to become an artist from an early age. The Burman family already had an artist, her uncle Sakti Burman who would flamboyantly return from Paris every summer and set up his studio in their home enthralling the younger kids with his painterly skills. “Sakti kaku,” she squeals with schoolgirlish delight. “He’s my buddy. I call him a saint because he has retained his childlike quality which is very rare in this material world.” Talking about her late father — the man behind the popular Bengali shoe brand Khadim India (named after his Muslim friend, she shares proudly) — makes her nostalgic. She was his favourite child. She , remembers fondly how he personally came to drop her off at Santiniketan’s Kala Bhavana. Her student days there were some of her happiest. “Kala Bhavana gave me freedom and made me the artist that I am today,” she acknowledges. Upon her return from art school, the young Jayasri Burman was dreaming of an artistic career that lay ahead but life instead took an unexpected turn when she was persuaded by her family that it was time to settle down. She grudgingly agreed to an arranged marriage. Her husband-to-be was an aristocrat living in Uttarpara, a short distance from Kolkata. Even though the couple eventually divorced, the feudal life, family politics and customs at her in-laws’ ancestral mansion left a lasting impression on her. It was like being on the set of Sahib Bibi Aur Ghulam, Burman observed years later in an interview with Ina Puri, the curator of River of Faith. “The elaborate jewellery and saris Jayasri saw [her husband’s family wear] would find their way to her art, the paisleys on the woven Banarasi, the heavy kaan pasha and navratana necklaces adorning her sisters-in-law, transforming each into a devi,” Puri writes in Jayasri Burman: A Mythical Universe, a coffee-table book on the artist.

In 1996, Burman left Kolkata for Delhi to start her life afresh, initially living and working from her modest abode in Chittaranjan Park. Meeting and marrying Paresh Maity, who had been “madly pursuing” her, was like a new beginning. For Maity, it was love at first sight. “We had the most beautiful love story ever,” he muses. “More than a husband, Paresh was always my friend. We used to and still give each other the necessary freedom,” says Burman who’s also a closet poet. Her tough life, she adds, has only made her stronger. “Now when I look back I realise I have done well, as an artist, daughter, wife and mother. The biggest lesson I have learned is never to wallow in misery. Better to pick up your life and just move on. And grow. Growth is very, very important.”