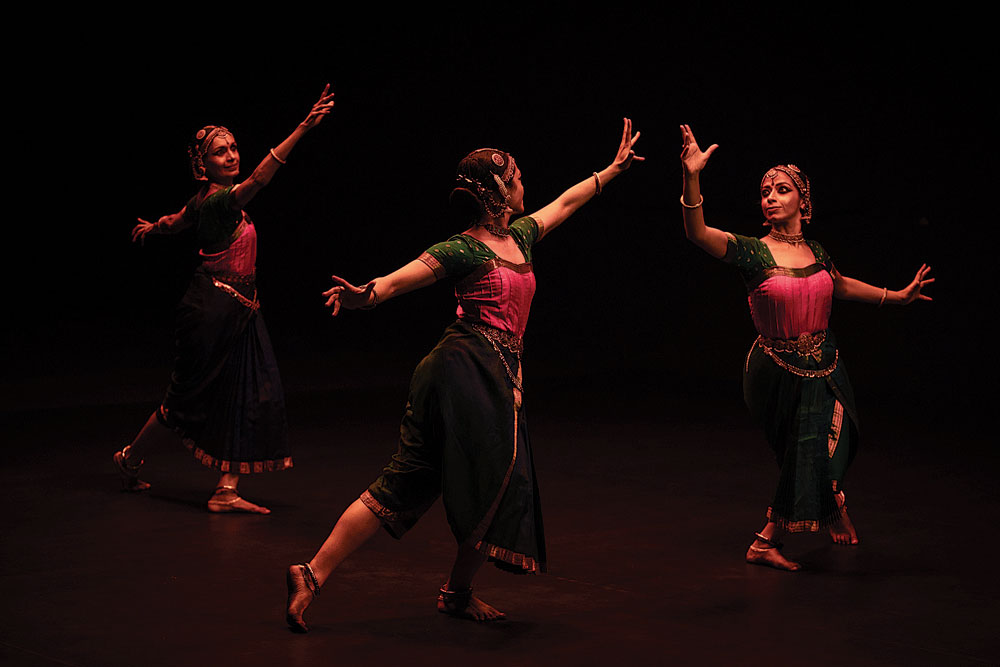 Priyadarsini Govind and disciples in Yavanika


WADING THROUGH A water-logged Chennai, we meet Bharatanatyam dancer-choreographer, Priyadarsini Govind in her home studio, to discover Yavanika, a dance film that only a select audience in Singapore has so far seen as part of Apsaras Arts’ annual dance convention in September, and is waiting to premiere on an OTT platform, soon.

There’s excitement and apprehension as Govind waits for the world to watch this production that was originally meant for stage and was entirely re-imagined for the camera this summer. “Without a doubt,” says Govind, sipping her filter coffee, “the moment I decided that I was using the camera more than merely to record what was happening on stage, I knew I wanted to bring on board a collaborator. In this case, a filmmaker, to ideate and explore possibilities on how dance can be shaped for cinema.”

Yavanika found in Sruti Harihara Subramanian, the perfect partner. An award-winning filmmaker and archivist who also conceived and directed a musical-docu series with maestro, AR Rahman, Govind says, Subramanian was keen, curious and invested in the project, from the start. “The moment I knew Yavanika was not going to have a two-dimensional vision, that the camera could turn to look at the dance from anywhere, I began thinking of the movements differently. Sruti would spend quality time at the rehearsals getting familiar with the work and we’d discuss possibilities.”

As a thematic film, Yavanika explores the notion of illusion, of the veil, the curtain, the cloth that conceals, binds and reveals at the same time, and features Govind with two of her prime disciples—young, intellectual artists in their own right—Apoorva Jayaraman and Shweta Prachande. “Yavanika was just pure joy for me,” Govind says, “It’s the first time I have created work in dance with more than two dancers and to discover and explore it all on a new medium with possibilities, aplenty was just fun.”

Bharatanatyam dancer-choreographer-teacher, Rama Vaidyanathan allows us online access to her new work, Sannidhanam—Sacred Spaces, a dance on film, commissioned by the Mandala Centre, Vancouver in collaboration with The Dance Centre, Canada, that premiered on November 8th and was available online for a week, thereafter.


“The response to the film has been overwhelming,” Vaidyanathan says, of this new work that found its genesis slowly, deliberately, simmering its way, one layer after another, almost like a pot of biryani. It was created when the country was in lockdown mode during the second wave of the pandemic, and when five of her students were stuck in her home, in Delhi.

Shot evocatively by Delhi-based filmmaker and photographer, Innee Singh, Vaidyanathan envisioned this theme especially for the camera. Drawing inspiration from shapes—circles, squares and triangles—and their manifestations in Indian spirituality and philosophy, the work marries the choreographer’s fascination with geometry and her innate pursuit in continuing to seek and unravel dance’s many forms. “This was my first group work for the camera and I found the experience liberating,” she says.

INDIAN CLASSICAL DANCE has always reinforced the imperativeness of the Rasa theory and celebrated the concept of the sahrdaya (the learned and appreciative member of the audience) and of that surreal moment when the mind, emotions of the artist and that of the audience finds instant, immediate union. Amongst the many seismic shifts that we witnessed in the year of the pandemic and its aftermath, the Rasa theory now finds itself travelling through the lens of a screen, allowing the artist autonomy to create a piece of art and call the shots, and the audience to consume it, as is doled out. “In a live performance, the audience sees what they want to see; on film, I ensure they see what I want for them to see,” Vaidyanathan says, summing up the onset of a hybrid model of dance productions that has rather suddenly but surely made its way, impacting the nature, content, and consumption of dance.

“Work produced during the pandemic,” says Delhi-based Dr Arshiya Sethi, dance scholar and Founder, Kri Foundation that has been showcasing dance films for over 18 years now, “was immense but of uneven levels; some did not understood that the camera is not an appendage to dance and did a fancy recording of dance on camera; others, were hesitant to leave the linearity of the spine of thought. Still others were a bit uncertain about themselves and their experiments.”

Having said that, Sethi avers that “even if it took a pandemic, today, dance films have come centre stage and many dancers—though I can’t say most dancers yet—are looking at dance films. It’s truly a pleasure to curate an Indian dance film festival.”

In April this year, Delhi-based Kathak dancer-choreographer, Sangita Chatterjee’s Kalpataru Arts Foundation in collaboration with Kri, conceived and presented Chakshu, an exclusive dance-on-camera festival that showcased nearly 17 dance films, a significant number from India, and also had post-screening conversations that enabled artists and audiences to examine the highs, lows and the future of this medium. The festival idea came to Chatterjee after she created her first dance film, Quest, almost “by accident” and was intrigued by this new medium. “I was very keen to understand this genre—dance for camera—and Chakshu found its genesis with an intent to allow artists who have also been toying around, creating work, to discuss, and share insights on what I’m convinced is no more a mere makeshift arrangement but a medium, raring to go and here to stay.”

One of the many interesting films that featured at Chakshu was Mumbai-based dancer-choreographer and voice artist, Prachi Saathi’s Raftaar Karo Kam. With access and previous exposure to the camera—Saathi has been a model, actor and a television anchor—she brings nuance and acumen to the way she uses the camera to tell her stories through dance. “The interplay of light and shadow, the location, the costume, the riyaaz that goes towards creating work for the camera, and the magic of editing” she says, “they are all phenomenal and experimenting with it all over the last 20 months, especially, has been invigorating.”

These dancers are enjoying the autonomy to experiment both with form and content and the luxury to be able to enable a transformative experience on the editing table. In her film, Raftaar Karo Kam, for instance, Saathi works with a ghazal and Gaurav Chopra’s relevant composition for the times that we were in—the window between the first and the second wave of the pandemic—reinforced the urgent need for us to breathe, slow down and let nature be. Canned by Pune-based Sejas Mistry and Esha Pinglay, the work juxtaposes meanings and metaphors with static and dynamic camera techniques, suspending the viewer from the comfort of her viewing experience and carrying her along to experience the space, the movement and the angst of the protagonist. “I like to think, no, actually I’m convinced the magic happens on the editing table,” Saathi says.

“The interplay of light and shadow, the location, the costume, the riyaaz that goes towards creating work for the camera, and the magic of editing, they are all phenomenal, and experimenting with it all over the last 20 months, especially, has been invigorating” Prachi Saathi, dancer in Raftaar – Karo Kam

On the other side of the Atlantic, in New York, classical and contemporary dancer, Sonali Skandan’s Jiva Performing Arts, ideated and presented two dance-on-camera festivals—Still Point Expanding in November last year and Dualities in April, this year. As a dancer who has dabbled—in small measure—with the camera, Skandan says that the pandemic “propelled her to explore dance on camera works featuring the artists whose work she admired, in an attempt to also allow them to innovate, and challenge themselves to present work in a new way.”

Over the last year, Skandan has conceived and presented a handful of dance-on-camera works, her most recent work being Adventures of a Naughty Bee, directed by dancer-choreographer and academic, Maya Kulkarni, also based in New York. A “thoroughly” fun and invigorating project, this choreography, Skandan says, tells the story of a dancer, a bee who travels from Turkey to China to Spain, imitating the dancers in martial arts, the graceful sweeps of fan dancers in the Ming court, the matador and the bull in pain and the temple dancers in the Chidambaram temple. “You see, works like these are best when showcased on camera,” says Maya Kulkarni, from her apartment in New York city, “since transitions can come alive thanks to editing techniques and possibilities in layering.” Aside from a full academic schedule, Kulkarni has been actively mentoring a host of dancers and helping them discover dance on film.

For dancers, dance-on-camera not only showcases their dance and tells new stories, but it has also meant the possibility of learning new skills. As multi-taskers who often piece together every aspect of a production—ideation, choreography, costume, music, lighting, documenting—this has meant a new challenge altogether. “Dance,” as Sethi says, “is so ephemeral that dance films not only give it a wider, different, more eclectic and diverse audience but also a longer shelf life.”

Govind is hoping for that with Yavanika, by virtue of creating abstract concepts in dance that find expression on film, audiences interested in the arts, not necessarily familiar with dance, or Bharatanatyam, in particular, will also choose to engage with it.

What makes dance films further exciting is the spirit of collaboration, wherein specialists bring to the table, their respective skill sets, elevating the work and transforming it. Speaking about her recent work, Sannidhanam, Vaidyanathan says, “My most favourite shots in this work are the group tight shots that create the idea of the abstract in the scene. One of the aspects crucial to creating dance-on-film is the way you mix the camera and how much time you spend on an angle to sustain its connection with the audience. Quick cuts can only distract an audience and sometimes stray away from the core content. And finally, an editor needs to understand that it is after all a classical dance on film, and the hard work the artist/s have put in, needs to come through.”

In a year that denied artists the joy of touring the world with their arts, explorations like these enabled possibilities in travel, of a different sort. Chennai-based dancer, Shweta Prachande, speaking of her Yavanika experience, recollects how it took her a while to get used to the idea of the eye of the viewer—the camera, in other words—being up-close and sometimes, even at an angle she’d sometimes thought of as a “personal space. During rehearsals, what helped greatly was Priya Aunty, my teacher, started recording not just the rehearsals but also the choreography sessions right from the start. Watching the recordings helped understand movement from the POV of the camera. The process of befriending the camera as a collaborator and not just a documenter was eye-opening.”

In Chennai, as the city gears up to welcome its season of music and dance, the annual Margazhi festival that will unfold in various shapes, forms and mediums, this year, and as we negotiate our way through, it’s also worth thinking about the onset of the digital era and its influence on the classical arts. “This is never going to be a be-all, end-all medium for dance,” says Vaidyanathan with conviction, “But you see, we have tasted blood and we have seen how convenient, powerful and far-reaching this medium is, so I suppose it’s here to stay, alongside a live performance.”