Imran Qureshi and Aisha Khalid: My name is Red 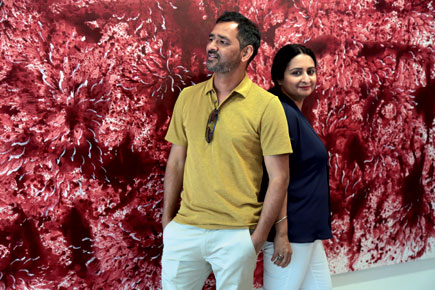 There was a time when students of the miniature painting department at National College of Arts (NCA), Lahore, used to chase skittering squirrels in the city’s magnificent Shalimar Gardens. How else would they have got those ultra- fine bristles for brushmaking if not from the bushy tails of these ubiquitous creatures? Pakistani artist Aisha Khalid, when she was an NCA student in the 90s, would always rely upon the gardener to get her those tails. Her teacher would not compromise on the sanctified traditions of miniature painting—which uses brushes of squirrel fur. Today, there are makers of these paintbrushes in the market. What’s hard to find are squirrel catchers, although Aisha has a sneaking suspicion that there still might be a few NCA students who’d much rather wait for the right moment to capture the rodent by its tail to paint the perfect miniature.

But while the representation of courtly life, hunting scenes, deities and legends would have embodied a perfect miniature in a different past, Khalid’s ongoing exhibition of her art inspired by miniatures at Delhi’s Nature Morte gallery yields no easy burst of colour or stately privilege. In Larger than Life, 2012, a 92-by-47-inch canvas with a white surface, you see a stencilled depiction of what appears to be a human figure in a burkha. The bare but luscious image is grafted onto wasli, a handmade multilayered paper specifically used in miniatures, and there is an intricate band of gold painted over the image, apparently to halt the onward journey of the figure, which seems ready to step out of the frame. Is it a comment on the oppression of women in Pakistan or a mockery of the hackneyed portrayal of Muslim women in the Western media? In a dramatic reversal of sorts, two richly embellished carpets in bright bold colours hang from the ceiling—instantly recalling the imagery of traditional miniature paintings with their patchwork of fantastical dragons and tigers embroidered in. But jarring elements soon arrest your attention. On one side of In Two Forms and With Two Faces: With One Soul, Thou and I, the two carpet tapestries, one can spot a mesh of gold- plated pins embedded across the fabric. The military fatigue-surface of the second carpet, lushly bordered with maroon and silver, cannot possibly appear conventionally elegant. But then contradictions, paradoxes and cruel ironies are a part of Khalid’s life in Pakistan. “The carpets represent the passing of time,” she says, “How beauty, tradition and all those beautiful colours change with time, how they convert into something else due to violence.” Similarly, the minimalist roses and tulips rendered by her are all half-open or drooping like a willow—her lament on the horrendous attack on a school in Peshawar last year.

Hailed as one of the most interesting contemporary artists in Pakistan today, 43-year-old Khalid belongs to a circle of new-age miniaturists who have revived the centuries-old tradition of miniature painting. These inventive ‘neo-miniaturists’ are being feted in the international art circuit with group shows and solos in places like the UK, France, Japan, Hong Kong and Australia. Well- known art critics and curators are taking serious note of this renaissance, whose practitioners are dramatically expanding the idea of miniatures and their application. Khalid, whose oeuvre sometimes weaves in mediums as diverse as textiles and video to depict the interplay of beauty and disorder, was recently on Newsweek’s list of 100 ‘most powerful’ women in Pakistan.

In the same show, Imran Qureshi, who is considered the foremost exponent of contemporary miniature painting in Pakistan, unleashes his deep, dark meditation on the colour red. In his 78-by-146-inch canvas titled You Who Are My Love and My Life’s Enemy Too, blotches of blood appear splattered indiscriminately across the surface, reminding one of pitiless gunshot wounds. Get closer and you will be surprised to discover finely patterned, white-lined dahlias sprouting from this reckless feast of macabre red. A similar, more minutely patterned profusion of red in pin pricks is set against a gold leaf canvas in This Leprous Brightness, resembling a dazzlingly blood-soaked sunrise that reveals glowing white flowers on closer inspection. The relentless blossom of flowers and foliage, the painstaking brushwork and gilt are all integral to the lexicon of Mughal miniatures, and Imran Qureshi at once subverts and honours these gilded motifs, creating in the process the most unsettling likeness of blood in all its beauty and gore.

Explaining the symbolism of the colour red, Imran Qureshi says, “Earlier, it had a different meaning for me. But now, with the growing intensity of violence in Lahore, it directly symbolises blood in my paintings. Whenever a bomb blast happens, a landscape full of life would suddenly transform into something else. But then I see people responding to it like they didn’t used to 20 years ago; they come out on the road and talk about it, and suddenly that bloodied landscape was full of life and hope again.” Imran Qureshi, too, trained in the discipline of traditional miniature painting at NCA, where he met his wife Aisha Khalid. Today, he has carved a niche as an independent artist who has pushed open the boundaries of what we know and recognise as miniature painting. In 2013, his musings on violence and recovery reddened the roof garden of New York’s Metropolitan Museum of Art by way of a large site-specific installation. He was named Deutsche Bank’s ‘Artist of the Year’ soon after. A 2014 review in The Guardian described him and his work thus: ‘Qureshi’s unique gift is for bringing his own land beneath your feet, before your eyes and into your mind. And though this may be most viscerally achieved in the abstract paintings, it has its peak in Qureshi’s reinvention of the miniature.’

So what all does this revival entail? The history of miniature painting has witnessed an organic process of evolution, with visual changes introduced in every school. Even so, there are some radical divergences in the miniatures of modern-day Pakistan. For one, they are almost always much larger in size than what one usually understands as a ‘miniature’; from the single-sheet, the canvas has expanded, even using vast three- dimensional spaces and digital media. Organic pigments have been replaced by high-quality synthetic colours. The content mostly seeks to convey the hard political and sociological realities of current- day life, layered of course with images and motifs drawn from the vocabulary of Persian, Mughal and Rajput miniatures—to emphasise the idea of individual freedom, an indulgence that the royal patrons of olden days rarely allowed. And the composition is never really packed with the kind of exhaustive detail that exemplifies traditional miniatures. The ornamentation and drapery now tends to be minimalist, reflecting a Western aesthetic. As Martand Khosla, a noted architect and artist based in New Delhi and writer of the ‘Foreword’ to a new Penguin book on Pakistani contemporary art titled The Eye Still Seeks, observes: “In Pakistan, the tradition of teaching miniature painting has continued alongside modern art classes and this has lead to unexpected influences on both the traditions of painting.” This offers clues, perhaps, to why a similar movement has not emerged in India.

To revive interest in this illustrious tradition, Lahore’s National College of Arts— first set up in 1875 with Lockwood Kipling, Rudyard Kipling’s father, as its first principal, and known earlier as Mayo School of Industrial Arts—started offering a specialised major in miniature painting back in 1982. Students who take it up must undergo diligent training in Mughal musawari (miniature painting): from making their own wasli, colours and paintbrushes, to painting delicate historical figures in the exacting technique of paradakht (similar to pointillism), and from using their hands as palettes and mussel shells as mixing bowls to employing the floor as a tool and their laps as easels. Says Salima Hashmi, artist, curator, contemporary art historian and former principal of NCA, of their schooling, “These students are in an art school where contemporary issues are discussed and debated. There are courses in art history, visual communication and seminars. It was a few years earlier that graduating students pried open the tradition and forged a way of working and thinking relevant to the times. It was time to remake the tradition.” Says Durriya Dohadwala, who writes extensively on South and Southeast Asian art, “The success of many of its practitioners on the international art stage has revitalised interest in the miniature department at the NCA in Lahore, and enrolment has gone up manifold in the last 15 years. It is now also taught in many art schools around the country.”

This painting department in South Asia has produced virtually all the renowned contemporary miniature painters from Pakistan, who have gone on to infuse unbridled individu••••ality and creative expression into an art form once considered highly formal and restrictive. The first wave of revivalists was led by the 1993 NCA graduate Shahzia Sikander, who went on to win a MacArthur Foundation Fellowship in 2006, and later Pakistan’s National Medal of Honour for her artistic achievements. Sikander’s deconstruction of the post-colonial legacy of Pakistan through the miniature technique went on to inspire a generation of NCA graduates in the 90s. Her spellbinding 2003 digital animation SpiNN sought to mock CNN. She filled her video with an assemblage of gopis with curious hairdos in a Mughal durbar, with a whirling mass of crows descending on them.

Nusra Latif Qureshi and Tazeen Qayyum are part of that exalted group of master neo-minaturists led by Imran Qureshi and Aisha Khalid, apart from names likes Talha Rathore, Saira Wasim and Reeta Saeed. Nusra Latif Qureshi, who currently lives and works in Australia, borrows heavily from existing miniatures. “This borrowing is not only visual but also conceptual,” she says, “Like constructing a space where the divine is placed in close proximity of mortals.” Tazeen Qayyum, yet another contemporary visual artist who trained as a miniaturist at NCA, created a 45-minute live performance presenting an 18th century Kangra miniature as a tableau vivant, bringing to life a painting using performers, music, real-time video projections, props and costumes. “The audience could move around, in and out of the performance. My prime endeavour was to explore how historic artistic practices and visual strategies would mediate and meet the contemporary expressions in art today,” says Qayyum of this project titled A Feast in Exile.

It is when Hashmi explains the distinct approaches of the artist- couple Imran Qureshi and Aisha Khalid that a fundamental truth reveals itself: “Aisha’s work is organically, spatially, compositionally ‘tight’, while Imran’s is free-flowing, open, incidental and intuitive.” In a moving tribute to the gold leaf once used extensively for surface illumination in Persian, Mughal and Indian miniatures, Imran Qureshi has mounted an 8-minute video installation titled Breathing in the exhibition gallery. Here, a crumpled metallic sheet of gold poignantly surges and sinks in a quavering screen of blackish grey. Perhaps, the romance of art lies in the constant juxtaposition of the old and the new, the ‘tight’ and the ‘free-flowing’, the golden era that once was and the grey landscape that we now inhabit.

(Imran Qureshi and Aisha Khalid’s exhibition is on view at Nature Morte gallery, New Delhi, till 30 May 2015)