Ajay Devgn on his dislike for the ‘I-me-myself brigade’, making omelettes with daughter Nysa and the intriguing spelling change 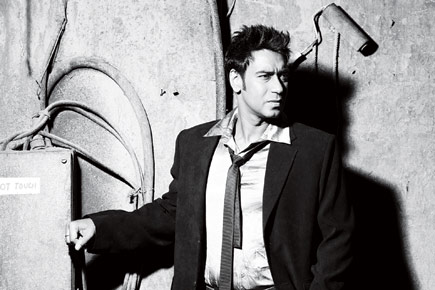 Ajay Devgn tells Open about his dislike for the ‘I-me-myself brigade’ and the intriguing spelling change.


Back in 1991 when a tall, dark, and not really conventionally handsome man stand-riding two bikes (a foot on each) made an entry on screen with Phool Aur Kaante, we sat up and took notice. And we’ve been noticing ever since as Ajay Devgn morphed effortlessly from mean action hero to the intense, brooding loverboy to the comic caper king. In an industry dominated by camps, he’s managed to hold his own against the Khans and Bachchans and Kapoors and Roshans. On the eve of his big Diwali release, the much-married Mr Kajol Devgn tells Open about his dislike for the ‘I-me-myself brigade’, making omelettes with daughter Nysa and the intriguing spelling change

Q All The Best releases this week, your first film in almost a year. Why did you choose to produce this film?

A I loved the script of All The Best and felt it was a sure bet at the box office, which is why I decided to produce it. It’s releasing now as planned, but due to the theatre strikes and the congestion of films ready for release, I have London Dreams with Salman Khan also coming out on 30 October, though it was scheduled to release much earlier. Not an ideal scenario, though, but it’s all good. Salman and I worked in London Dreams after Hum Dil De Chuke Sanam in 1999, a decade ago.

A Back then, when I was being launched, there were three other Vishals debuting at the same time and I had no choice but to change my name to Ajay so I wasn’t lost in the crowd. My old friends still call me VD (yeah, I know it sounds weird) and I changed the spelling of my surname at the behest of my mother, Veena, who has asked me to do it for many years. It makes her happy.

Q Despite Golmaal Returns being a top grosser last year and you being one of the highest-paid actors in the business, you keep a very low profile and prefer to not club yourself in the Top 5 or Top 10 categories like your contemporaries…

A I’ve been accused many a time of not promoting myself enough, but it’s not my style to scream and shout about my achievements. Even though I want to change from my reticent nature and be more ‘out there’, I find it cumbersome. The media knows my worth and what business which film of mine did, but even then, they choose to ignore that and write what they want. I am doing my job as an actor and I expect them to do theirs in all fairness. I don’t want to learn how to play these games and schemes just to get noticed, or be bestowed with some fancy title. It’s too late, anyway. I have no desire or inclination to waste my time over self-proclamations of greatness. I look down upon those who do and I feel far superior to most actors. I am very satisfied and extremely proud of the work that I do and the success that I’ve achieved subsequently. I live by own code of conduct that deters me from singing my own hosannas and I would hate myself if I did and I’d much rather not get into that space.

Q Your cold war with Shah Rukh Khan—fact or fiction?

A It is not fact at all. But just because Shah Rukh and I are not the best of friends doesn’t mean we are enemies either. Both of us are fed up of answering this question time and again. My wife, Kajol, is friends with him and Karan Johar for a very long time, and I respect them as her friends as she does mine. I am not a very social person and stick to home and work largely.

Q Do you and Kajol influence each other’s film choices?

A We always talk about our projects and seek each other’s advice, but we do what we individually want in the end. There is absolute freedom for both of us. We don’t take each other for granted and understand each other completely.

A My sense of family is very strong and if that means I’m traditional, then I am. We all live in one house, and despite it being a four-storey bungalow, which we moved into about two years ago, my parents, Kajol, Nysa and I live on one floor. All our bedrooms and family rooms are on this floor and it stems from the fact that I feel everyone should try and keep the family together, if they can.

Q You have been married for a decade now and have a daughter, six-and-a half-year-old Nysa. Are you planning another child?

A I have balanced my life between work and family perfectly, but I still feel I am losing time since Nysa is growing up so fast. I want to spend as much time with her before she gets too busy with her friends to hang out with her father. Kajol wants another child, but I am still thinking about it.

Q You are a closet chef of sorts too…

A How did you hear about that? I only cook for my family and Nysa loves everything I make. I like to experiment with world cuisine. My daughter actually makes the best omelettes in the world, albeit under supervision, for her parents. And the best part is Kajol can barely boil water. So, Nysa takes after me in this regard.

Q Your looks don’t exactly constitute a stereotypical ‘sex god’ tag for you, but your reputation as a great lover, has been resoundingly endorsed by women over the years… What do you have to say about the latter?

A What can I say except the obvious, that it is every man’s dream to have such a ‘sexy’ reputation among women. I’m flattered.

A And boy, am I glad. And that’s because I am not having any affairs. Earlier, when such reports would do the rounds, Kajol never reacted to them because she trusts me implicitly. My life is work, office and home, no detours on the way.