How the Waste Was Shunned

An ambitious project by artist Michael Landy in the UK invites artists to dump their ‘failures’ in a giant waste bin. 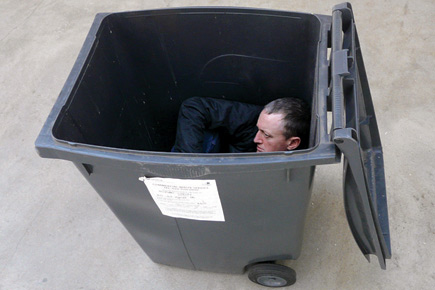 An ambitious project in the UK invites artists to dump their ‘failures’ in a giant waste bin.


Two white-gloved men carry a huge painting up the stairs of a five metre high black tower to a platform and hurl the canvas into a see-through 600 cubic metre container. The painting tears as it lands on the jagged remains of a broken sculpture. The painting is of a skull encrusted with fragments of glass. It is part of a series called For the Love of God by Britain’s most famous living artist, Damien Hirst, whose platinum skull studded with diamonds sold for a reported £50 million. The barbaric destruction was not the work of art heathens. Rather, it is part of the process of the latest artwork from another of Britain’s great contemporary artists, Michael Landy.

Art Bin, as Landy has called his new work, is an attempt to interpret ‘failure’. The 46-year-old Landy has erected a five metre tall, six metre wide and 15 metre long Perspex and steel container at the South London Gallery and has invited artists—famous and unknown—from around the world to discard their failed works into this enormous bin. “The works that go into the bin are essentially artists’ leftovers. Pieces that would never normally be seen in a gallery because the artist considers it a failure… Items that have been part of experimentation and have not worked out,” Landy tells me.

Landy began inviting friends and peers, many of whom are part of the group known as Young British Artists (YBA), to participate in his work from December 2009, and by 29 January, when the bin was officially installed and opened, he already had pledges from around a hundred artists. Some of the top modern living artists who have ‘trashed’ their works are Damien Hirst, Tracy Emin, Gary Hume, Peter Blake, Nigel Cook and many other Turner Prize winners—the UK’s most prestigious art award. “I have asked Anish Kapoor for a piece, but I am still awaiting a reply,” says Landy of the Indian-born award-winning artist, who has now joined the super-rich with a multi-million pound fortune. Installation art has evoked interest around the world and Landy has already had applications from the US and East Europe, but nothing, so far, from India.

Hirst was one of the first artists to generously ‘throw away’ two of his skull paintings, versions of which sold during his shows at the White Cube for £235,000 to £9.5 million. Emin, who won the Turner Prize some years ago for her Unmade Bed, gave some sculptures. Blake donated a self portrait and Hume gave a sculpture of all his paint pots on which he has been working for the past ten years. All have now been thrown into the bin. “There is no hierarchy in the bin. I am inviting any artist, famous or not, to come and trash their work themselves or send it into us and we will do it for them,” says Landy. There is no order in which pieces are thrown in. A Hirst can lie under a complete novice’s work. “All these pieces have value outside in the world but they have no value in the bin,” says Landy.

Landy claims that getting rid of work that artists feel is a failure can be a very cathartic experience and encourages artists to help him ‘feed the bin’. Landy is the one who decides on what is eligible for the vast vat, but as he says, “Nothing is too good to go in. What is a failure is subjective and as long as the artist considers the work a genuine failure, that is fine by me. I am essentially the bin monitor and am there to stop people from throwing themselves or their alter egos into the bin.”

Landy’s bin has already created waves. “Despite its destructive premise, Art Bin affirms the importance of art and the significance of the artist’s role in making it,” argues Ben Luke, an art critic. “After numerous paintings and sculptures have been flung into the bin, the result is a forlorn pile of wood, glass, canvas and other humdrum materials, completely stripped of that elusive magical transformation that turns them into art,” adds Luke.

Unlike other YBAs, money is not a priority for Landy, nor is this the first time he has been hit by the destruction bug. In 2001, Landy’s piece titled Break Down comprised the ritualistic destruction by the artist of everything that he owned. He had set himself up in a department store on Oxford Street in Central London where he shredded all his belongings over two weeks, while shoppers dropped in to see him do exactly the opposite of what they had come to do— acquire things. Landy got rid of 7,227 items, including his clothes, his car, his love letters, his family heirlooms, the entire archive of his own art, his passport and his tax records. Destroying a passport and tax records is illegal in the UK but the Inland Revenue let him off because he was an ‘artist’. Break Down received criticism at the time from members of the public as well as from within the art world.

Art lovers argue that with Art Bin, Landy grapples with issues around the value of art, success and failure in art, and the moral rights of artists. His premise for the project was the realisation that artists typically destroy their own works when they are dissatisfied with them. Landy initially thought of Art Bin as “a monument to creative failure”, though there are artists now offering up works that aren’t failures at all. Many emerging artists clearly view sacrificing their work to Art Bin as a privilege, so their work can be in the company of those by ‘names’, and its inclusion may even give them a leg up in their career. “At its most elementary level, Art Bin is a satire of the art-consuming mania that is rampant today,” says Bryan Appleyard, art critic. There are so many artists out there and almost anything can be passed off as artistic and people are willing to pay obscene prices to acquire it and be considered fashionable.

Landy’s work generally focuses on the paradox of existence. On the one hand, we have become so materialistic that we carry on acquiring goods but they can be destroyed in an instant, on the other, nothing is ever destroyed, it is termed ‘waste’ and simply moved to another place. “In the West, we have become extremely efficient at getting rid of our waste… we simply pack it up and send it to a landfill somewhere we can’t see it, often to another country,” says Landy. “When I did Break Down, 90 per cent of everything I owned ended up in the bin. With Art Bin when it is complete it will end up in a landfill,” he adds.

The maverick artist who lives in a nearly empty house in Brick Lane, known as Bangla Town, in London with girlfriend Gill Wearing, also an artist, says he is not against possessing but the “huge turnover of stuff and wastefulness”. He is faced with the argument that Art Bin itself is a ‘waste’ that could be put to better use like being sold and the proceeds given to charity. Landy argues that is the very reason he has asked for ‘failed’ works. “These are pieces the artists would never show or allow you to have even for charity because they have no worth…” says Landy.

Some critics of installation and modern art even say that with Art Bin, the art form has found its rightful place ‘in the rubbish heap’. Environmentalists have also criticised Art Bin for perpetuating landfills. “The works are not all bio-degradable, but that is the point I wish to make with this. People should stop buying things they don’t need, and whatever we produce should be recyclable. We are efficient in moving on our rubbish but not in designing things that can be recycled,” says Landy.

Artists have till 14 March to donate works. There is an application that has to be filled in, and it can be done online by logging on to a site, where they declare that they authorise Landy or his representatives to ‘permanently dispose of and destroy the work once the show closes’. In return, Landy promises that when the exhibition is over, no attempts will be made to salvage anything, and the whole ‘testament to a landfill’ will be despatched to a landfill. So, if there are any Indian artists out there who want to participate, please apply now.