How the Stage Got Upstaged

With his Third Theatre, pioneer Badal Sircar (1925—2011) took the art of drama off the conventional stage, straight to the people 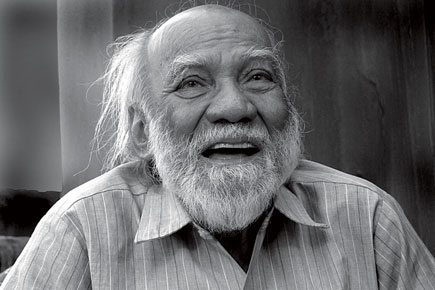 With his Third Theatre, pioneer Badal Sircar (1925—2011) took the art of drama off the conventional stage, straight to the people


For someone who never sought the limelight, who turned his back on the stage of mainstream theatre, and who spent his last years far from the dazzle of media attention, Badal Sircar, ironically remains an exceptionally influential figure in the field of contemporary Indian theatre.

From Manipur and Kashmir to Kerala and Maharashtra, and across a wide spectrum of languages and forms, there is scarcely a corner of theatre activity that has not been influenced by Badalda, as he was widely known.

Born in Calcutta on 15 July 1925 into the ‘middle-middle class’, Sircar trained as a civil engineer. His first job took him to Maithon in the Damodar Valley in 1953, and it was here that he began to take an active interest in theatre. He started a club that soon began to mount full-scale productions. He also felt the first stirrings of dissatisfaction with the choice of play texts available, which drove him to write his own plays. By the time he left to spend two years in England, working and studying for a diploma in town planning, he had already written four comedies—Solution X, Ram Shyam Jadu, Boro Pishima and Shanibar—which reflected a talent for capturing the rhythms of everyday speech. He began to write poetry in England, which was to eventually come together in 1963 as his most famous work, Ebong Indrajit (And Indrajit). In 1964 he went to Nigeria to work for the Nigerian government. This was a prolific phase in terms of playwriting: he wrote Baki Itihaas, Tringsha Shatabdi, Pagla Ghoda and three other plays. He returned to Calcutta in 1967, and started his theatre group, Satabdi. For the next decade, he worked as a town planner till he gave up the job in 1977 to do theatre full time. In these ten years, he travelled to east Europe and the US. His exposure to the theatre of Jerzy Grotowski in Poland, and Richard Schechner and Julian Beck in the US, was to have a major impact on his work.

Badalda, as he was affectionately known, first gained a reputation in the theatre fraternity as a playwright. His Ebong Indrajit captured an angst that spoke for an entire generation. Celebrated Mumbai director Satyadev Dubey says its power was such that every subsequent work of his carried in it something of Evam Indrajit (as it is titled in Hindi). Theatre giant BV Karanth acknowledges a strong bond between the play and himself. Badalda’s other plays, like Baki Itihaas and Pagla Ghora, also received acclaim, and were mounted by leading directors and theatre groups.

But he was already moving away from proscenium theatre, from auditoriums and ticketed shows, towards a different philosophy. In 1973, Satabdi foreswore the proscenium stage and embraced a theatre based on direct, live communication between the actor and the audience. This theatre demanded an intimacy and equality that was impossible on the urban stage. Badalda coined the term Third Theatre to distinguish this from the traditional folk forms of theatre that he termed First Theatre, and the urban, westernised model he called Second Theatre. Third Theatre is based on the centrality of the actor and the human connection. This is an honest, face-to-face communication sans all distancing mechanisms, ‘masks’ and devices such as the ‘fourth wall’ of the proscenium stage, fixed seating with the audience in darkness, tickets that restrict entry to those who can afford it, lights, sets, and pre-written scripts. Third Theatre is a collective process, the text developed with the active participation of actors, through workshops. It is mobile and flexible, needing no sets and lights. Sircar soon began to prefer the term Free Theatre to describe it, explaining that it is free because the public has free access to the performance space, because productions can travel freely to the people, using any available venue, and because the actor is freed of restrictions inherent to proscenium theatre on approaching the audience.

This is theatre as counter-culture, protest and political comment, an exercise in conscientisation and awareness-building. It draws on the daily reality of the common man, with all its violence, corruption, discrimination, struggle, disillusionment, hope, confusion and questioning. Badalda used powerful motifs to communicate his ideas—the young man who gets killed every day in Michhil; the walking dead man in Basi Khabar.

This theatre can be performed in community halls for audiences of 50 or 60: the anganmancha; or in outdoor public spaces for audiences of hundreds and thousands: the muktamancha. In the former, there is an intensity and directness in interaction. In the latter, there is greater access and reach, allowing performers to take theatre to the people. The actors’ bodies form machines, forests, factories, trains and buses. They crawl through the audience, growl, hum, chant, sing, make eye contact, ask questions and speak directly to spectators. At the end of a play, they often invite the audience to join them in a gesture of solidarity or hope.

The best known names in Indian theatre acknowledge a deep debt to Badalda’s theatre. Girish Karnad, playwright, director and actor, has said the pathbreaking play Ebong Indrajit  taught him about fluidity between scenes. For Manipuri director Heisnam Kanhailal, it was Badalda who set him on the path towards his own unique dramaturgy. Street theatre groups Samudaya of Karnataka and Jana Natya Manch (Janam) of Delhi recognise the major influence of Badalda’s philosophy and approach in their work. Even a stalwart like Naseeruddin Shah, while admitting that he comes from a very different school of theatre, has been quoted as saying, “But my theatre is also moving towards Sircar’s theatre.”

His plays remain in demand with youth theatre groups, while Beyond the Land of Hattamala and Scandal in Fairyland are popular children’s fare in several languages. Badalda’s extensive travels across the country through the 1970s, holding workshops at different places, left a mark. Kanhailal was first exposed to non-verbal physical theatre at one such workshop, as was the Kannada left-wing theatre group Samudaya, which was prompted to take up street theatre after this experience. Badalda encouraged and supported theatre groups like Ayna (founded in 1978) and Pathasena (founded

in 1979), taking an active part in training and directing plays for them. This was an educative and nurturing role that went beyond his individual achievements as a playwright and theatre theorist.

Badalda strove for the ideal of a truly democratic space for theatre where human beings could meet voluntarily as equals. He would say, “When afterwards we spread our cloth for contributions, they don’t have to pay. If they do pay, it is neither a gift nor a price––it is participation. They are indicating that they liked what they saw, that they want this kind of theatre to go on. That is a human relationship.”