How Kanye West Was Won 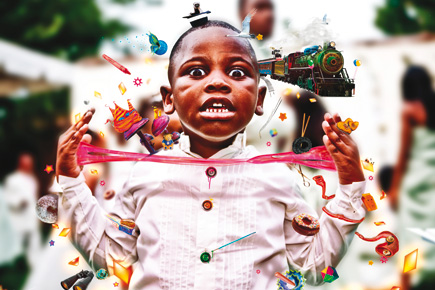 
When Kanye West puts something on his blog, hundreds of thousands of people around the world see it. Twenty-six-year-old Archan Nair, a Delhi-based mixed media artist, however, isn’t overawed by the fact that Kanye deemed his work good enough to put up on his website. “(It) was nice to have Kanye feature my work on his website. The artwork got a lot of recognition before he featured it, so it was an honour that a wonderful talent like him appreciated the work. A lot of friends who are celebrities, outside in Europe and America, told me that they saw the feature, so it must have created some form of buzz,” Nair says.

The work that Kanye noticed was a media collaboration between Nair and a Brookyn-based photographer, Parris Whittingham, a friend of Nair’s. “We just caught up one day and both our expressions inspired each other to create a dream collaborative… a series of artworks revolving around the dreams for each person we captured on camera. He did the photography and I did the artwork,” Nair explained.

It isn’t easy to describe Nair’s work, colourful and vibrant as it is. Best to let him do it: “I have been experimenting with mixed media, such as water colours, acrylics, digital softwares like Photoshop, to create my visions. The theme really depends on each artwork, for every work the approach can be completely different. I usually start with the conceptualisation of a theme, idea or maybe inspiration which hit my head. I then sketch and draw the entire idea on a sketchbook and get my concept laid down clear. Then I visualise the final feel and effect which I need to give to that particular artwork, and accordingly go about using the various tools in Photoshop or using water colours on paper or canvas or drawing pencils or pens. But the final composition is done in Photoshop. And sometimes, I go with the flow. I feel I need to express myself, and I just start creating, without any planning.”

With any artist, it’s almost a rule that they must be asked what inspires them. It’s the same with Nair. “Life equals inspiration. Everything and anything could inspire. Even this conversation or a cup of chai (tea), you, my friends, travels, anything really. I get inspired very easily, so it is just this incredible beautiful life which works with us, where it creates and lets us create. India is a stunning, beautiful country. I feel truly blessed to be born here in this divine land. My art and expressions have a natural influence from our rich culture, atmosphere, and heritage. So much richness in fashion, food, streets, festivals, people. Every part of India you go to, you experience so much diversity. It’s full of soul and passion. I definitely get a lot of influence directly or indirectly from this country, which has embedded its values into me subconsciously.”