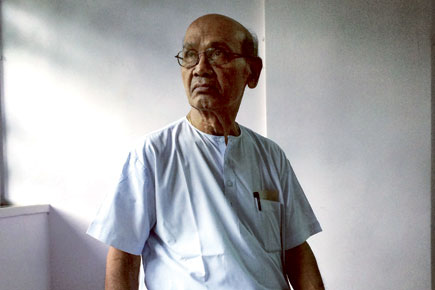 As Gour Hari Das, an 84-year- old former officer in the Khadi and Village Industries Commission (KVIC), casts his mind back to the early 1940s when he’d just become a teenager, the heroic figure of his father Hari Das is the first image that comes to light in his kaleidoscopic memory. Hari Das, a Mahatma Gandhi follower full of nationalistic fervour in those heady days just before Independence, was a much harried man. His tormentors were local police inspectors in the border village of Jhadpipal, Orissa. One particular policeman, relentless in his pursuit of Hari Das for supporting Congress party workers in the freedom struggle, would badger and mock Hari Das at his own doorstep in front of his family. Eventually, he came up with a cunning idea to put an end to the harassment. When Gour Hari Das’ younger brother was born, their father named him after the annoying policeman, and the next time he came knocking, Hari Das lovingly admonished the baby by calling out the name. Embarrassed, the policeman backed off.

Hari Das didn’t see it as an example of bravado, and was insistent that his children never derive any pleasure from insulting others. Decades later, his son Gour Hari Das, too, would be amazed how little things had changed—and how easily his credentials as a freedom fighter would be dismissed. Today, his life story, dramatised in an upcoming biopic, Gour Hari Daastan: The Freedom File, is a testament to his courage, unsung though it has largely remained all these years.

The sacrifices and heroic deeds of historically significant lives have found their way to celluloid in such prominent biopics as Sardar (1993), The Legend of Bhagat Singh (2002), Bose: The Forgotten Hero (2004), Mangal Pandey: The Rising (2005) or even Bhaag Milkha Bhaag (2013). These, however, would have one believe that for such a film made to inspire national pride, its subject must invariably be someone whose biography has already been burned into public memory. But once in a while comes a humbler biopic, one with none of the breathless energy and pyrotechnics of popular fare—its narrative powered by little other than the person’s moral values and inner strength. Such is the quiet intensity of Gour Hari Dastaan: The Freedom File.

When filmmaker Anant Mahadevan read in 2009 about Gour Hari Das’ success after a 30-year struggle to acquire a freedom fighter’s certificate from the Indian Government, he was fascinated by the irony of it. ‘It was a freedom soldier’s disillusionment. He fought for years to free India from the clutches of British invaders and then was forced by the very country he helped free, to prove it,’ writes Mahadevan in an email interview. ‘When I met him, I was in for a bigger surprise. The frail man didn’t look as though he would last a day in the bureaucratic mesh but he fought it out for 35 years. That too without raising his voice or staging a dharna or fast at Ram Lila maidan and the likes. It spoke volumes about the man who put his Gandhian principles into practice even in a free nation.’

Born in 1931, Gour Hari Das was deeply influenced by the stirring speeches of Mahatma Gandhi in his teenage years in Orissa, and was active in the freedom struggle as a member of a band formed by Indira Gandhi called the Vanar Sena, diligently playing the role of a messenger between Congress party workers during the Non- Cooperation Movement. By his claim, he was once praised at a meeting for his sprightly enthusiasm by Gandhi himself. Speaking to Gour Hari Das over the phone, his voice sounds enlivened by memories of those days. “Our brigade of children participated in marches and protests, distributed propaganda pamphlets. We hung national flags, provided protestors with food and water, gave medicines to Congress volunteers, helped the elderly, cleaned toilets and kept the neighbourhoods clean,” he recollects with a twinge of wistfulness. “With our prabhat pheri (early morning rounds) and gram sewa, our Vanar Sena was always popular among villagers, and the fervent chant of liberation from foreign rule was always driven home by us,” he says.

Once, on 26 January 1945, Gour Hari Das, his father and other nationalists had gone to the village maidan to hoist the Indian flag when local policemen appeared out of nowhere and forbade them from doing what they considered their duty. “My father said to the policeman, ‘Your government has ordered you to forbid any flag hoisting on this day and our government has asked to not return without hoisting the national flag.’ We, of course, violated the policemen’s warnings and hoisted the flag. We headed straight to the police station thereafter,” recounts the 84-year-old with glee.

It is only later, as he launches into an account of his eventful stay behind bars with fellow political prisoners, that one realises how satisfying his incarceration must have been for him as a mark of resistance to the Raj. From gardening to filling water tanks, from washing copper plates with yeast powder to staging mini-rebellions for justice within the prison system, the month-long imprisonment sounds more like a memorable camp for boy scouts in his telling.

Those glorious flag-waving days soon became a thing of the past, as a new India went about its business of nation-building after Independence, and Gour Hari Das found other avenues to be of service to the country. From being a school master at a Sevagram under Gandhi's Nai Talim or ‘education through craft’ programme, to joining Vinoba Bhave’s Bhoodan movement in Bihar, to making advanced models of the charkha and then finally joining the KVIC in Mumbai, Gour Hari Das’ career path up to his retirement in 1989 was an extended love affair with Gandhian ideals, even after those very ideals started appearing out of place.

Casual dismissal of his heroic encounters and cynicism over his identity as a former freedom fighter were slights he had no option but to get accustomed to. When a circular was issued in 1972 for the submission of names and application letters of former freedom fighters to the KVIC, Gour Hari Das simply sent in his details and didn't give it another thought when nothing came of it. It was only when he was called upon to furnish documentary proof of his patriotic past for his son’s admission to an engineering college that it hit him hard. His jail-leaving slip was rejected as evidence of his heroism, precipitating a spiritual crisis of sorts. “It is then that I knew that I had to get that freedom fighter’s certificate,” he says, “I did not have any godfather or MLA connection to help me expedite the process of getting that certificate, unlike so many others I knew.”

After Gour Hari Das retired from the KVIC, he resolved to devote all his waking hours to acquiring that one piece of paper. It was as if the battle of his youth was back; only, this time, his battlefield would chart a circular course from his house in suburban Mumbai to the Collector’s office and Mantralaya and then back home. This went on for 20 long years in a seemingly never- ending cycle of rebuffs, denials and demands for further proof. “The officials would do their best to harass me, to dissuade me from trying too hard. But why would I give up?” asks Gour Hari Das with the self assurance of a soldier determined to win or die trying.

The certificate was finally awarded in 2009. Asked how it felt to be recognised at last as a freedom fighter by the Indian Government, he almost scoffs at the question. “It was a poor apology for an honour,” he says, “No metal plaque, as you might expect. It was just a piece of paper.”

In retrospect, however, it has been worth the wait. National Award winner Mahadevan’s Gour Hari Dastaan, which chronicles his struggle and pays homage to his extraordinary resilience with sensitivity enough to make up for decades of state apathy, has won plaudit after plaudit at international film festivals. Having Vinay Pathak essay the octogenarian onscreen has proven to be a smart casting move. It was “the best news I got in my career”, Pathak says of being approached by Mahadevan to play the character. Even after mastering the appearance and mannerisms of Gour Hari Das—like his silences and white-kurta clad demeanour with thick reading glasses—Pathak says he had great difficulty in portraying a sense of conflict and inner turmoil within the man. “He is the most straightforward, simple and cheerful man I know,” says the actor, “He knows his limitations and is devoid of spite or malice or any kind of disdain. He is far from bitter, in spite of all that he had to go through.”

When Pathak egged him on to cite some regret or complaint against the present-day world, Gour Hari Das could hardly come up with anything. After much prodding, says Pathak, Gour Hari Das had this to say: “Back then, when we were kids, doing things for others was no big deal. It was so instinctive. Today, it is an effort, an extra thought. Par-upkar pehle bahut aasani se aata thha (Doing someone a good turn used to come very easily back then).”

Today, Gour Hari Das continues to support the cause of his harried countrymen in his capacity as general secretary of an NGO called National Anti Corruption and Crime Preventive Council. I ask him if he has seen the film inspired by his life. He says he hasn’t seen the full version, but only an hour-long preview in which the part that truly impressed him was his character’s no-make up look. “Everything looks so real in the film. It has such a simple look and feel. I am also like that. Everything I wear is always white, including my kurta, my underwear and even my topi… mujhey saadgi bahut pasand hai (I am fond of simplicity).”