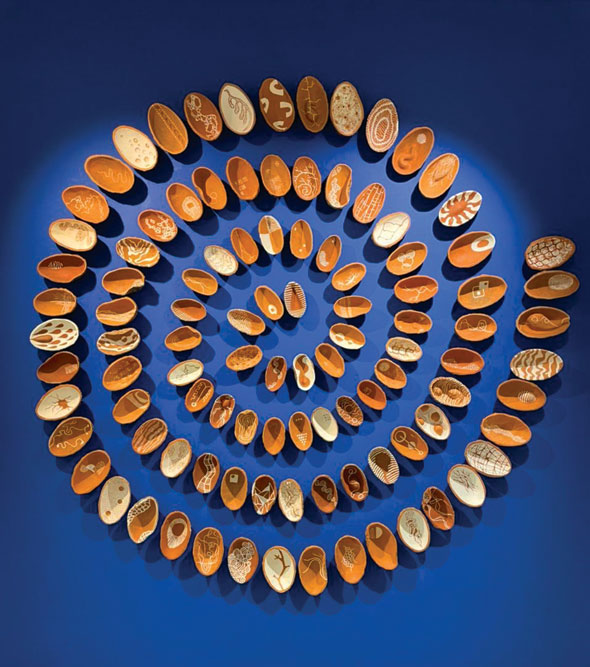 Meanderings by Ela Mukherjee (Courtesy: The British Council and the artists)


CLAY, AS A PLIABLE materi­al and medium of art, is the only one which employs all five elements or the Panchmahabhuta, as they are described in Ayurveda. There is earth (prithvi) embodied by the substance in its basic form, water (jal) which is required to shape it into a structure of choice, air (vayu) which allows the shape to take the intended form, fire (tejas) which solidifies and defines the shape, and space (akash) where the final itera­tion of the created object exists. This elemental engagement is touted as the reason humans have been attracted to it since time immemorial. It is also what allows the medium to be variegated and versatile in equal measure.

This is most evident at an ongoing exhibition on ceramics titled, Journeys of Clay and Fire, presented by Charles Wallace India Trust (CWIT) in col­laboration with the British Council, as part of the India/ UK Together A Season of Culture to celebrate India’s 75th year of independence. Curated by ceramicist, arts educator, curator and researcher Kristine Michaels, it brings together two distinctive aspects of the medium of ceramics—its iteration as an artistic material through the work of seven prominent contemporary artists, each of whom have been the recipient of the CWIT grant in the past; and its use as a means of livelihood for potters in Gundiyali, Gujarat and Baswa, Rajasthan under the aegis of the British Council’s Crafting Futures project. The latter is in collaboration with the Design Innovation and Craft Resource Centre, CEPT University, Ahmedabad and the Indian Institute of Craft and Design, Jaipur and West Dean College of Arts and Conservation.

“The concept as it was relayed to me was to bring together these two contrast­ing aspects of ceramics—as used in hereditary potter communities and as a medium of art. It appealed to me because that’s my area of interest,” says Michaels. Her keen curator’s eye has divided the Queen’s Gallery at The British Council New Delhi into two sections. Displayed on one side are works of art across sizes and mixed media, and on the other, information and imagery that speaks of the important work done by Crafting Futures. Though Michaels only learnt about the latter during the course of cu­rating this exhibition, she was familiar with the work of the seven chosen art­ists, having been on the interview panel for CWIT for some years now. “We chose them as they were the seven most recent grantees in the field of ceramics, but also because we felt they were the ones whose aesthetic language had changed the most with the international expo­sure they received through this opportunity,” she adds.

Michaels’ assessment isn’t far off the mark. The artists in question undoubt­edly have distinctive practices, yet the common thread that binds them together is their well-defined narrative and ability to stay true to their artistic process. Take the example of Abhay B Pandit, whose practice meets at the intersection of art and craft, in keeping with the overarching theme of Journeys of Clay and Fire. Hailing from a tradition­al potter’s family in Mumbai, he was the first of his clan to transition from creating ceramics as a craft to making it an art, when he graduated from the JJ School of Art. Inspired by the coastline he saw growing up, his works recreate natural elements in a striking manner. A pillow-shaped sculpture decorated in ripples of black and white, displayed at the exhibition, personifies this fascina­tion as he imagines how the earth’s atmosphere may look from space. “I have frozen those blue, white and grey skies and the atmospheric gasses with textured clay and engobes in an abstract language using my clay material. Its pliability is the reason I love this medium—I can mould clay into any form to express myself. This piece cre­ates an illusion of roundness, but when viewed from the side, it is flat. I like this deceptive ability of art which leaves everything open,” says Pandit.


WORKS THAT ARE open to interpretation are also at the heart of artist Shitanshu G Maurya’s discipline. His series The Sketchbook II displayed here, consists of imagined ob­jects displayed as decorative bric-a-brac in a home. Yet it is the oddly shaped Fossil I and Fossil II that capture the viewer’s attention. His ‘fossils’ are named thus because, “One never knows the exact age of a fossil. It is based on assumptions, and similarly these objects cannot be explained in an exact manner—they are unknown and act as metaphors for the preserved remains of the emotions and circumstances in one’s life.”

A play on emotions, specifically those related to memories, is seen in Shruti Bansal’s porcelain structures. Titled Memoirs of Transformation, her display is dedicated to her mentor, celebrated ceramicist Manisha Bhattacharya, whose untimely demise had a profound effect on Bansal. Through a variety of differently sized pieces, some of which are punctured with holes, she evokes the inherent layering in the formation of memories. Her work is a metaphor for the artistic process, from the time a thought enters an artist’s mind, and comes to fruition through the drawing board, the fur­nace, and the final form; and for the role played by people who have departed. The artist asserts that these people are still contained within others through their memories.

Where Bansal talks of memories, Neha Kudchadkar explores her Goan heritage through Inheritance, a video projection on a local bed of clay. At­tempting to contextualise her roots to better understand herself, she visited her father’s hometown Kudchade in South Goa’s mining district, located on the banks of the river Zuari. Here she traced her history and identity through conversations with distant members of her family and other locals. She says, “I was attempting to find the Kudchade in the Kudchadkar. In this work, I focus on the movement of the river, as layers of different stories I collected passing through my hands.” Her other poignant work titled Weightlifter is part of her on­going project Auto-Ethnography Through Objects. This video shows Kudchadkar lying flat on the ground as she slowly covers herself in clay objects of varying sizes. Her body becomes the vehicle to signify the immense weight of the socio-political concerns around her, and the ensuing anxiety that make it difficult to even breathe.

The inclusion of digital media, as with Kudchadkar’s mixed media works, is a prominent and interesting facet of the exhibition. Michaels was keen to include them as she believes the digital lens is the future of art. To this end, she brought on Sindhu: A Subterranean Song, a collaborative film project by artists Shirley Bhatnagar and Pallavi Arora, which was originally commissioned by the Serendipity Arts Foundation for SAF Virtual 2020. The focus of the film is on pottery from the Indus Valley civilisation, which was mostly discovered in a broken state. Imagined as a variety of sculptural, ritu­alistic, or functional daily use objects, these are pieced together in the film to echo the Japanese concept of Kintsugi, which in the curator’s words refers to, “Something breaking, being destroyed, an explosion, so that creation can re­start. This represents the cyclical nature of all that is around us. The fragility of ceramics and the transient nature of the moving image together explore the connection between the mediums.”

Artist and educator Bhatnagar’s other works consist of quirky ceramic objects and illustrations. Both Ochterlony’s Household and Unusual Suspects are based on the findings recorded in author William Dalrymple’s book White Mughals, where the first English settlers in India readily took on the extrava­gances of native Rajas and Nawabs. Her Toby Jugs where Toby—in this case Lord Ochterlony—holds a hookah in one hand and his Indian bibi in the other, are a nod to the tongue-in-cheek humour synonymous with the British. Her favourite characters—Baiza Bai, the Maratha Queen who was also a warrior and banker, and Fanny Parks, the English explorer—appear more than once. She explains their appeal, “It was quite unbelievable at that time for an Englishwoman who couldn’t speak Marathi to befriend a Maratha queen and banker who was ten years older than her. They were both fond of riding horses, and there are some interesting conversations recorded in Fanny Parks’ original book where Baiza Bai tells her off for riding a horse side-saddle and another, where she points out that Parks is wearing a necklace meant for horses! The Englishwoman was quite in awe of her but it’s such a unique friendship.”

Ceramics have a unique material­ity which allow the work of art to be moulded and re-moulded till it is put to fire and set. This is evident in the work of K GukanRaj, Tidal and Thaw, whose many grooves, curves and muted tones reference the earth and its depths. Fasci­nated by the ability of natural elements to leave a lasting mark on every surface they touch, he shares examples of fire, when volcanoes carve out and create depth through lava; air, when cyclones disrupt and wreak havoc; earth, which shifts and cleaves by the force of its quakes; and the sky, which bursts open and moulds and shapes the land beneath. “All this leads to a point of beauty. I travel within and express this beauty in my work,” he says.

“Rather than recording my feelings on paper, I put them in clay, and the spiral form was apt because the artwork is still growing,” says Ela Mukherjee, artist

An amalgamation of nature’s ele­ments and journeys within one’s soul is also what the exhibition’s showstop­per piece is about. Meanderings by artist Ela Mukherjee consists of an ever growing spiral of egg-shaped spheres, each marking her varying moods during life in the pandemic-induced lockdown. She shares with candour, “Rather than recording my feelings on paper, I put them in clay, and the spiral form was apt because the art work is still growing. Though the form is largely the same, each one is unique and distinctive. My work is about repetitive sequencing with separate elements to form a cohesive sculptural group. Though small in scale, once installed, they often command a large space. I like to play around with the small forms in different layouts each time I display the work. The emphasis on form is primary to me.” Her other piece for the exhibition is a series called, Tribute to a Shared Past, which draws inspiration from the architec­tural influences of past dynasties and cultures that have had an impact on India. Through this work, she hopes to make a case for cultural preservation and the equal treatment of the diverse political, religious and artistic influ­ences of the Indian nation.

Indeed, the richness of art displayed at this exhibition can be credited to our country’s vast heritage and diversity. Michaels nails it when she writes, “One could argue that the exchanges between these seven ceramic artists and British artists and art institutions have helped us to define what contemporary Indian ceramic art is. This development has led to increasing self-assurance, global recognition and the growth of Indian ceramic art.”

“I focus on the movement of the river, as layers of different stories I collected passing through my hands,” says Neha Kudchadkar, artist

This is where the charm of Journeys Through Clay and Fire truly rests—in the juxtaposition of the old and the new, the traditional and the modern, the homegrown and the global, and most importantly, the emotional and the material.

(Journeys of Clay and Fire runs at The British Council, Delhi, till November 29)